Roberts Temple Church of God in Christ is known for hosting the 1955 funeral of Emmett Till, which helped spark the civil rights movement. But three decades earlier, it also launched the career of Sister Rosetta Tharpe, who is known as the godmother of rock ’n’ roll.

Tharpe, the lesser known of the two figures, played the electric guitar and sang a mix of gospel and proto-rock. She influenced Elvis, Bob Dylan, and many others, and she will be inducted into the Rock and Roll Hall of Fame on April 14.

Crain’s Chicago Business reporter Dennis Rodkin shares the history of the South Side church and the influential people who made it a famous landmark.

The church was the first Chicago sanctuary of the Church of God in Christ — a Pentecostal denomination with roots in Mississippi in the early years of the 20th century and based in Memphis. The Chicago church was founded in 1916 by Elder William Roberts, who was handpicked by the Church of God in Christ's founder, Bishop Charles Mason, to minister in the city to which many southern African-Americans were migrating.

Five-year-old Rosabell Atkins arrived in Chicago with her mother, Katie Atkins, who was an aspiring evangelist in the Church of God in Christ, sometime in 1920, according to the definitive biography of Sister Rosetta Tharpe, Shout, Sister, Shout! by Gayle F. Wald. They moved from Cotton Plant, Arkansas — a tiny town midway between Memphis and Little Rock — to join the 4-year-old congregation that was worshipping in rented space at or near 37th and Federal streets. The spot is now vacant, city-owned land. 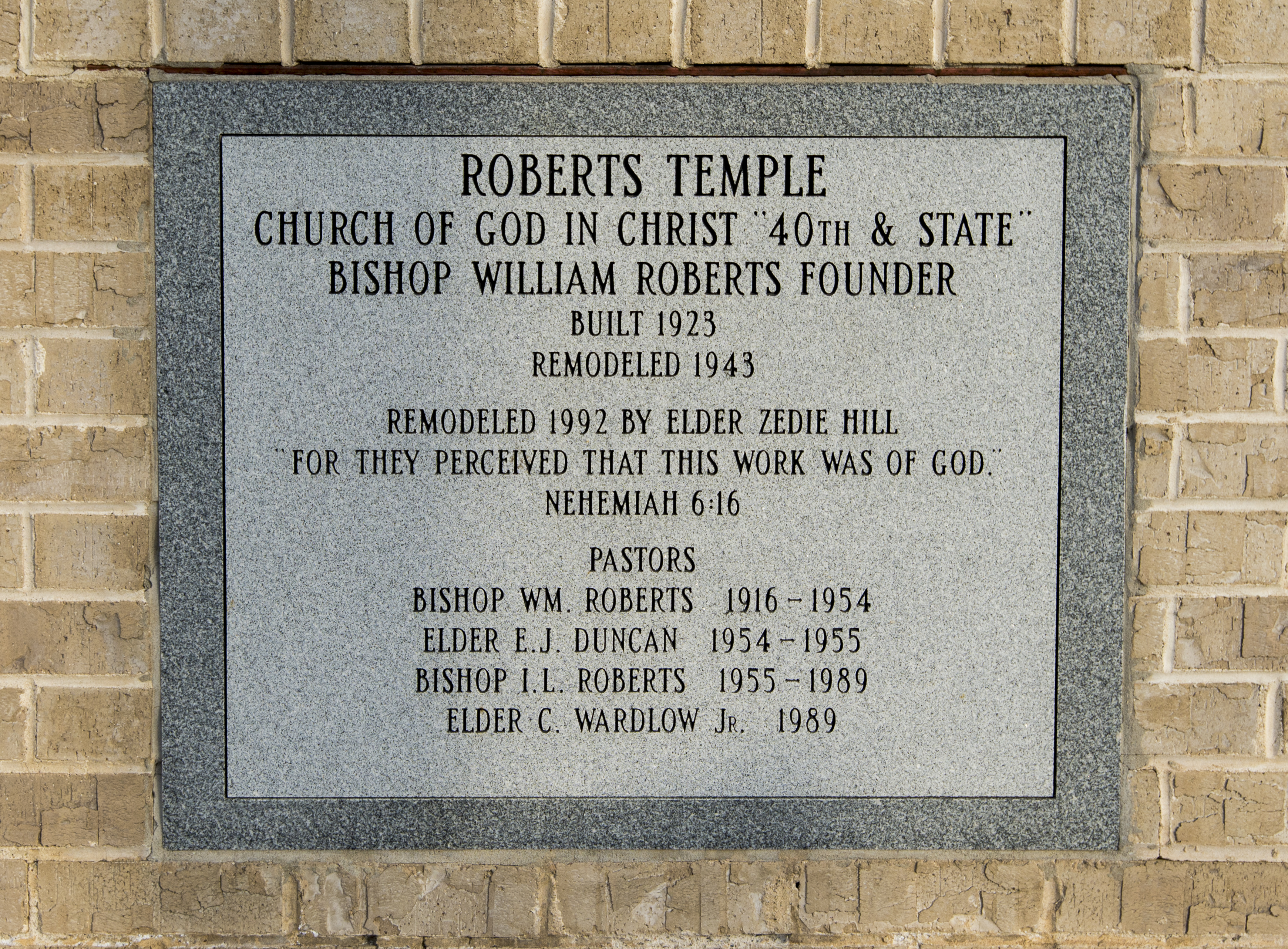 In 1923, the congregation moved into the Roberts Temple at 40th and State streets, about six blocks from the Federal Street location. Designed by South Side architect Edward McClellan, the temple was built in part with the hands-on labor of members of the congregation, and in part, with funds that others donated. It's a simple, lightly adorned building with a few tall windows and pew seating for several hundred people beneath a double-sloped ceiling, which is now hidden by acoustical tiles.

Now a sand-colored brick building, it was originally red brick and opened as a one-story building, with a second level added in 1927. It was known as Fortieth Street Church, and only later Roberts Temple. 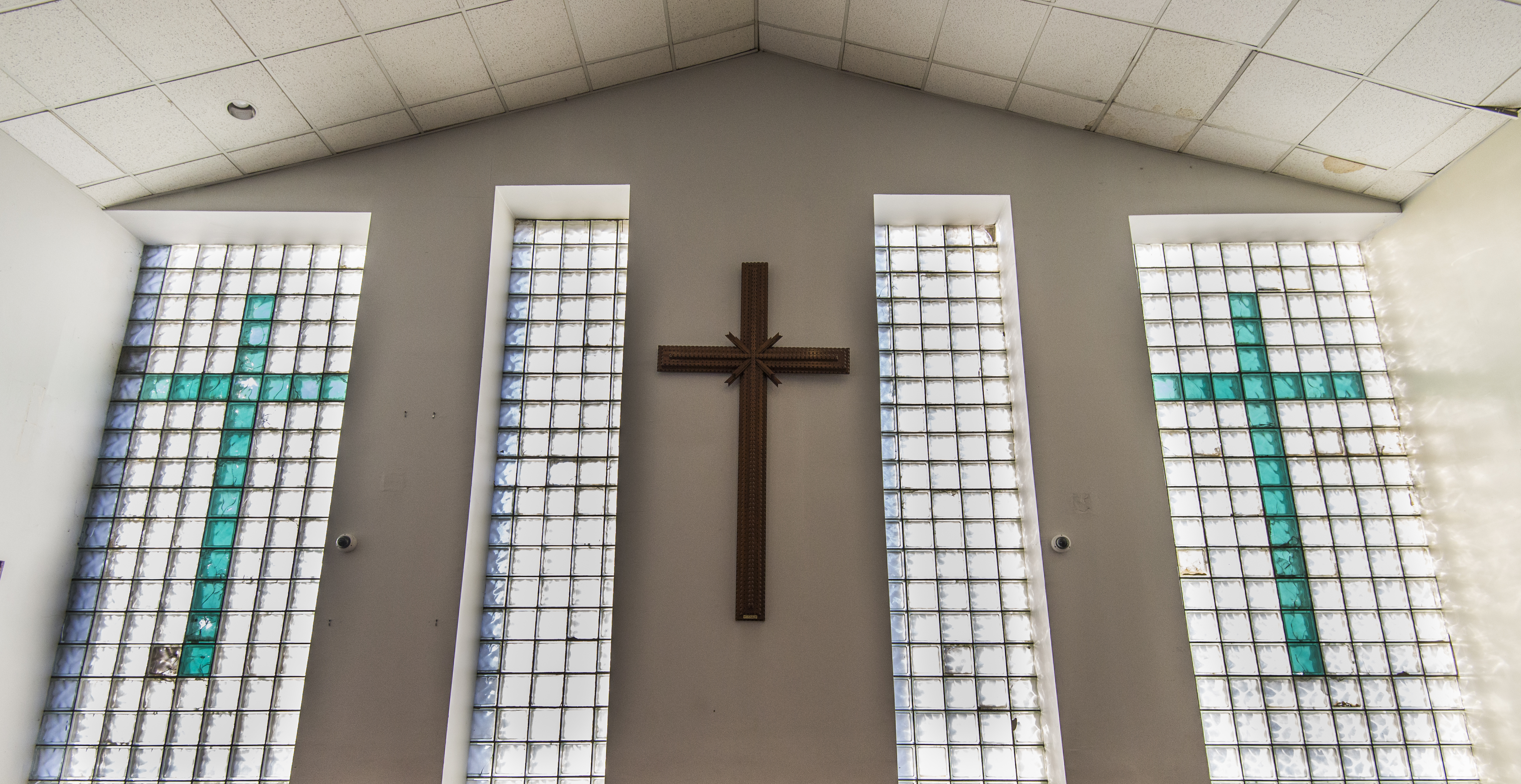 Rosie made her debut singing at the Chicago church at age six, still so small that the pastor would stand her on the piano so people in the back could see and hear her. Boys in the church played musical instruments while girls sang, early members told Wald, but Rosabell did both, and she was soon a solo performer and the main attraction at Sunday services.

Rosie and her mother remained members of the congregation until the mid-1930s, although as the years went by, they spent less time in Chicago as they traveled around the country for Rosie to perform in other COGIC churches.

At 19 years old in 1934, she married Tommy Tharpe (some sources say his name was Thorpe, and she used a version as her stage name), who was also a member of the church, and they started spending time in Miami at a COGIC congregation that had a radio station where she performed.

They moved to Miami full-time and then to New York in 1938, where Rosetta began performing at the hallowed Cotton Club in Harlem. She also performed that year at the Apollo.

She divorced her second husband in 1947, the year after Marie Knight, a young female gospel singer, joined Tharpe's act. Knight and Tharpe's relationship was an "open secret," according to Wald's book, and they eventually broke up both professionally and romantically (and Tharpe married a third man). But when Tharpe died in 1973 in Philadelphia, Knight did her makeup and helped pick her burial outfit.

An influencer in the Hall of Fame 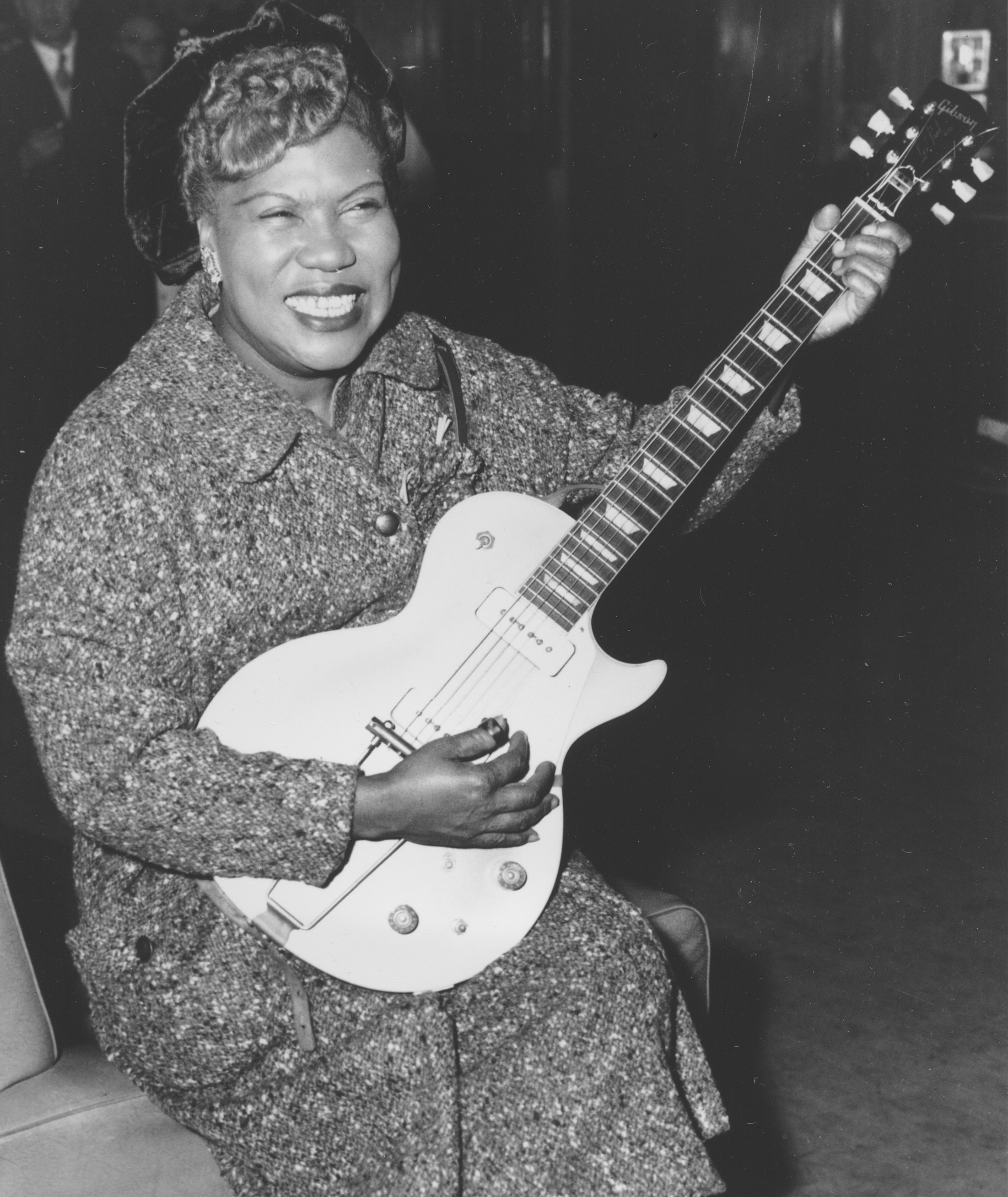 By the time she died, Tharpe was an acknowledged elder of the early rock ’n’ roll scene. Bob Dylan said that when she toured the U.K. with Muddy Waters and others in 1964, "I'm sure there were a lot of young English guys who picked up an electric guitar after getting a look at her." Some of her best-known recordings are “Rock Me,” “Up Above My Head,” “This Train,” and “Didn't It Rain.”

When her induction into the Hall of Fame's "Influencers" section was announced in mid-December, an article in Rolling Stone said that "no artist has been more overdue for recognition than Sister Rosetta Tharpe."

Catalyst for the civil rights movement 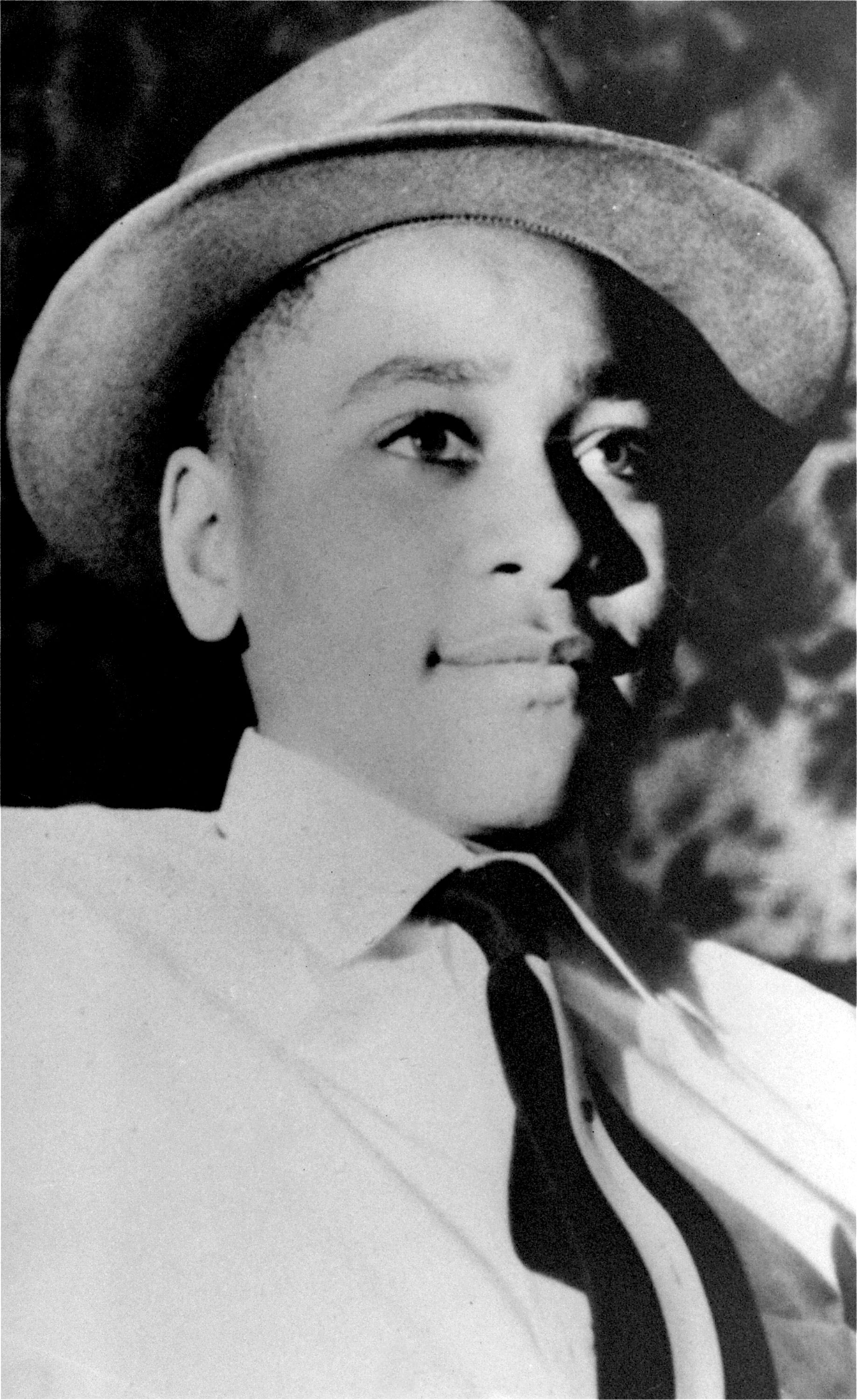 Nearly two decades after Tharpe and her mother and husband left Chicago and the 40th Street church, the building entered the annals of American history as the site of Emmett Till's funeral.

Till was a black 14-year-old boy who was brutally murdered in Mississippi by a group of white men in the summer of 1955. When his body was brought back to Chicago, his mother, Mamie, requested that the casket be kept open at the funeral in the Roberts Temple so people could see how battered and misshapen it had become in the killing. 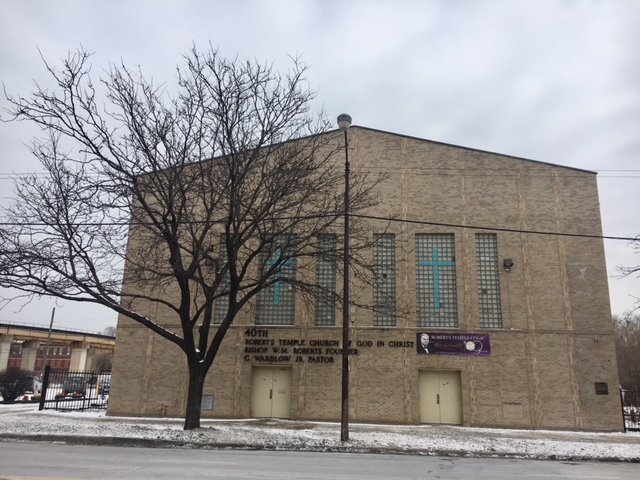 The horrific site of young Emmett Till's mangled, destroyed face became a catalyst for the nascent civil rights movement. Ever since, the building has been a landmark known for the defiant courage that Mamie Till Mobley displayed when mourning her lost son.

But we can also pay heed to another child, Rosie Atkins, who filled that building with joyful music on Sundays in the 1920s and 1930s and would go on to stardom as Sister Rosetta Tharpe, a black woman playing an electric guitar.

What's in the building now? Two congregations: the Roberts Temple COGIC congregation and a second called Bright Star, which is also a Church of God in Christ congregation.