The Kesner Building, as it's officially called, was an incubator of 20th-Century businesses and cultural figures. Among those who started or spent an early stage there are Wrigley gum, Jewel grocery stores, Carl Sandburg and Bob Newhart. Even that partial list is pretty impressive. There are very few buildings in Chicago that can claim links to as many businesses, writers and others. Even Mr T has a tie to the Kesner Building, at 5 N Wabash.

Built in 1910, the 17-story building on the northeast corner of Madison and Wabash was designed by the architectural firm Mundie, Jensen, Burke & Havens for real estate developer Jacob Kesner when the blocks around that intersection were quickly filling up with jewelers, watchmakers and related small businesses on what would eventually come to be known as Jeweler's Row. It was a classic Chicago skyscraper, with an ornamental limestone base three stories tall, several stories of red brick with slightly exaggerated window frames in white terra cotta, and an ornate cornice at the top. You can only see the top in old postcards now. At some point it was removed, and when you look at the top of the building now, you can see the scar of it clearly: the brick is a completely different color at the top of the building. 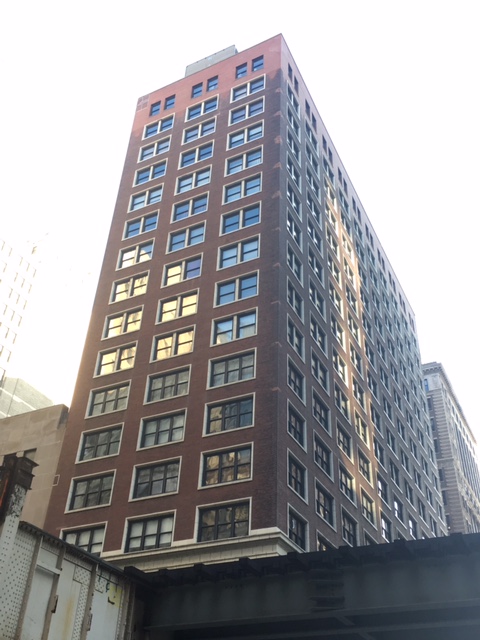 When the building opened in 1910, its 16th-floor tenant was Arch Shaw, whose AW Shaw Co published two business magazines, System: The Magazine of Business Efficiency, and Factory. They're the first incubated in the building: Shaw eventually sold his publishing company to McGraw Hill, and in 1929 System became Business Week magazine. Shaw was also involved in helping launch the Harvard Business Review.

Burroughs wrote business advice for System readers. While working for the company, he wrote his first published story, Under the Moons of Mars. One article says he also wrote his first Tarzan of the Apes novel, published in 1912, while working there, but the timeline doesn't seem right, and other articles suggest he was already done at System. In 1915, Burroughs published a novel called The Girl From Farris's, where a streetwalker tries to reform herself and get a respectable career. She goes to work in a company on the 16th floor of 5 N Wabash, but eventually realizes that there's just as much greed and dirty dealing in the respectable world as in the Red Light district.

Carl Sandburg went to work for System magazine when he moved to Chicago from Milwaukee in 1913. He appears to have worked there until he went to the Chicago Daily News in 1917, which would mean that he wrote the poem 'Chicago' while working on the 16th floor.

Edward Hopper, the great modernist painter, did illustrations for System magazine in the 1910s, but he didn't live in Chicago, so he may never have been in the building. However, his biographers say that his famous 'Nighthawks' painting looks like a later and more complete version of an illustration he did for the July 1916 issue of System that shows people sitting on stools at a restaurant counter.

In 1957, a young Bob Newhart worked the Christmas season in Van Langerke and Antoine, a hunting and fishing outfitter on the ground floor of 5 N Wabash. Newhart had quit his job in accounting to try to become a comedian, and in his memoirs, you can find a funny story he tells about selling a big order of ashtrays and cigarette lighters worth about $3,000 to a member of the mob, who had it all delivered to his house in River Forest.

And finally, Mr. T.: a history of the building says that the A-Team star who was famous for his layers of gold jewelry bought a lot of it from the small jewelers at 5 N. Wabash. There's no mention of this particular building in old articles about him, but the guy had a TON of jewelry and was known to buy on Wabash, so what the heck.

It was converted to condos on the upper 15 floors in 2003, and still has retail and office space on the lowest two floors.

We even get some classic Chicago corruption attached to the building. Jacob Kesner got into real estate at the turn of the 20th Century after his first career, as an executive at the Fair department store (Chicago's first department store) came apart because he was indicted for corruption, for trying to bribe Alderman William Mangler. He offered the Alderman $2000 to help overturn the Mayor Carter Harrison Jr.'s veto of a streetcar ordinance that would have allowed wealthy influencer Charles Yerkes to have a monopoly over Chicago's streetcar lines.

Along with this building, Kesner also developed the Consumers Building at 220 S State and the old Lake View Building at 116 S Michigan, which is now a School of the Art Institute building. Both of these were also designed by the architectural firm that designed the Kesner. Originally called Jenney, Mundie and Jensen, the firm's name changed a few times in the years after the 1907 death of William LeBaron Jenney, its founder, who's considered the inventor of the skyscraper.