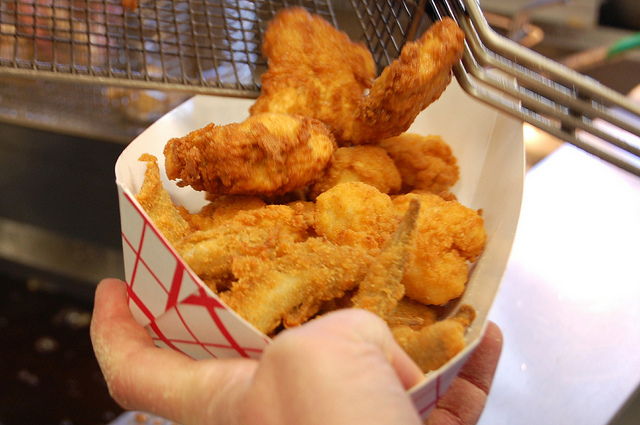 67th annual Smelt Fry at the Harvard Sportsman’s Club. "All the smelt you can eat!" Plus cole slaw, potato chips, bread, relishes, and beverages. By beverages I mean pop and most definitely beer. Not craft brews, but I'm guessing from what we've had at the club's Wild Game Dinner there will be classic kegs like PBR, Old Style, and Stroh's. If you can't make it out to pastoral McHenry County, both Shaw's Crab House locations in Chicago and Schaumburg have Lake Erie smelt the whole month of April, and Calumet Fisheries always has fried "smelts". Admission to Smelt Fry 2013: $16, $13 for carry out.

The Old Girl Network: Charity Cookbooks and the Empowerment of Women at Kendall College. The Culinary Historians of Chicago celebrates their 20th anniversary with this special lecture by Janice Bluestein Longone, curator of American Culinary History at the University of Michigan. Before mass media, communication, and transit, the first wave of the women’s movement was already active via the most ordinary of objects: the lowly cookbook. If you think cookbooks are nothing but recipes, this lecture will prove you wrong. This event will be recorded for WBEZ’s Chicago Amplified — but you'll need to attend to taste samples of recipes from American cookbooks. Admission $5, $3 for students, FREE for Culinary Historians of Chicago members and Kendall student and faculty.

Ruck4theKids Chef Battle After Party at Black Rock Pub & Kitchen. The main event, a benefit chef battle between Ripasso's Theo Gilbert and Schwa's Michael Carlson, is sold out, but an after party has just been added. Gilbert says there may be a tasting of the highly anticipated Off Color Brewing Tonnerre Neige, the collaboration beer Three Floyds. Admission $5, suggested donation benefitting Youth Rugby in Chicago.

Illinois BBQ Alliance Dinner at Smoque. Rub shoulders and eat and talk BBQ with local pitmasters. Smoque pitmaster Barry Sorkin will serve his signature ribs and brisket plus a special smoked beef tenderloin and smoked pork confit tacos. On the agenda: the state of the alliance and the 2013 Memphis Barbecue Network and Kansas City Barbeque Society competition circuit. The event is BYOB. The IBBQA supports those in need through fun, food, and friendship — and BBQ. Admission $50.

20th annual Dining Out For Life at more than 80 restaurants throughout Chicagoland. This annual dining event is North America's largest fundraiser for 60 HIV/AIDS service organizations, including Chicago's EdgeAlliance, a non-profit organization which assists its members in developing and operating quality housing and providing life enriching services to vulnerable individuals and families. Admission FREE, food and drink additional.