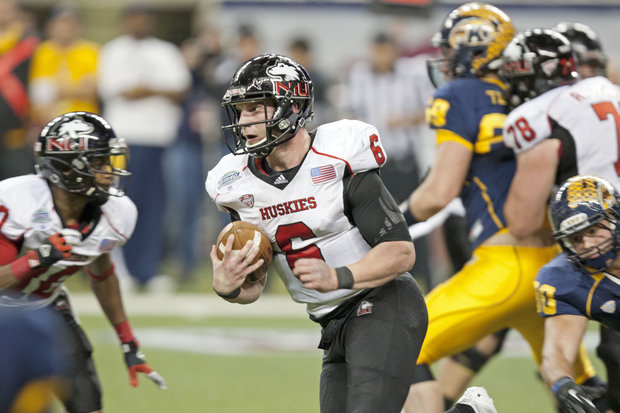 What did Northern Illinois University do to deserve such negativity about gaining a berth to a bowl championship game?

Talking heads have lambasted the Huskies for getting the nod to play Florida State in the Orange Bowl in Miami on New Year’s Day, and stats nerds and big time football schools have scoffed at this BCS selection.

It's not the National Championship game — that will really see the big revenues. But money is the reason for such displeasure — and the fact that a smaller school in a smaller conference (the Mid-American Conference) gets to share in the wealth. The MAC gets $8 million for having a team in a BCS bowl game, and this is the first time this conference has had a representative.

But NIU earned their spot fair and square: They have an exciting quarterback in Jordan Lynch, and the school has gone to five straight bowl games. NIU sent six players to NFL rosters and two more to the league's practice squads, and the program has succeeded despite a coaching carousel: Head coach Dave Doeren barely got the confetti out of his hair after Friday’s win before leaving to become the head coach at North Carolina State; his predecessor, Jerry Kill, made a leap to Minnesota. Rod Carey now leads the team, in Miami and beyond. Carey had been the team’s offensive line coach, but illness forced offensive coordinator Mike Dunbar to resign. Now Carey will diagram the Xs and Os in perhaps the biggest game of NIU’s history. Plus, a town like DeKalb deserves to enjoy a great experience this this. The school's players, students, staff and surrounding community are aving the time of their lives. It's a shame outsiders want to diminish what the 12-1 football program has accomplished.

There are several players on the NIU team roster from Florida. Imagine: They get to go home and play in their home state with Huskies across their uniform. Maybe they wanted to play for Florida State, Florida or Miami -- NIU chose them and they chose Northern Illinois University. There's excitement from NIU staff, too, like assistant athletic director Donna Turner. She's a Florida State alum, but make no mistake about where Turner’s allegations are right now. Despite where she came from, the Gainesville, Fla., native is walking around with an ear-to-ear grin, loving that her team has a unique opportunity on a big stage.

Frankly, isn’t that is what it is all about? A school little-known outside of Illinois now takes center stage. They can and should enjoy every bit of it. They deserve it.

The game may be weeks away but there's plenty happening in the meantime: