Chicagoan Mallory VanMeeter describes herself as the kind of person who enjoys getting to know different neighborhoods around the city. She says she loves looking at apartment listings and “imagining the kind of life that might be lived in homes across the city.”

In the process of combing through all these apartment listings, she’s picked up on a strange phenomenon.

“I kept noticing that listings for Chinatown were more or less non-existent,” she says. Mallory says she found this odd because she knows there are lots of apartment buildings in the area. In fact, according to the Chicago Metropolitan Agency for Planning, Chinatown has more renters than most neighborhoods.

So Mallory wrote in to Curious City with this question: Chinatown is a hole in the online rental market. How do people find apartments there?

What we found, essentially, was that most Chinatown apartments are rented to Chinese tenants through exclusively Chinese networks. These networks include everything from family friends to social media sites that are in Chinese. But the reasons Chinatown landlords prefer Chinese tenants are complicated. Landlords say they feel a level of comfort and trust with Chinese tenants, who share their language and culture. For community leaders in Chinatown, it’s also about a desire to preserve the neighborhood’s Chinese identity, one that was shaped by Chinatown’s historical role as one of the few places where Chinese could live in Chicago without facing housing discrimination.

As C.W. Chan, of the Coalition for a Better Chinese American Community says, for a long time, “the perception was [that] we had no other choice to go anywhere else.”

How and why the system works

To learn more about these methods, we met up with Chinatown advocates Chan and Debbie Liu at the bustling new Chinatown library and combed through some of the newspaper ads. They read like a lot of English language rental ads — listing number of bedrooms, location, amenities and price — only they’re in Chinese.

So how can Chinatown landlords keep their properties filled with what seem like pretty limited methods?

Chan says it’s all about demand. Unlike most Chinatowns in North America, Chicago’s Chinatown is expanding and continues to take in a steady flow of new Chinese immigrants. The Chinese population in and around Chinatown more than doubled between 1990 and 2010, according to analyses of U.S. Census data by Chicago’s Pui Tak Center.

And this means vacancies are snapped up quickly.

Plus, Chan says, recent improvements to the neighborhood — including the new library, a revamped ‘L’ stop, a new park fieldhouse, and expected high school — have pushed demand even higher. Those who might have traditionally moved up and out are staying in the area, and even spilling into nearby Bridgeport, McKinley Park and Armour Square. Additionally, some Chinese who moved to the suburbs for better homes and schools are now returning. 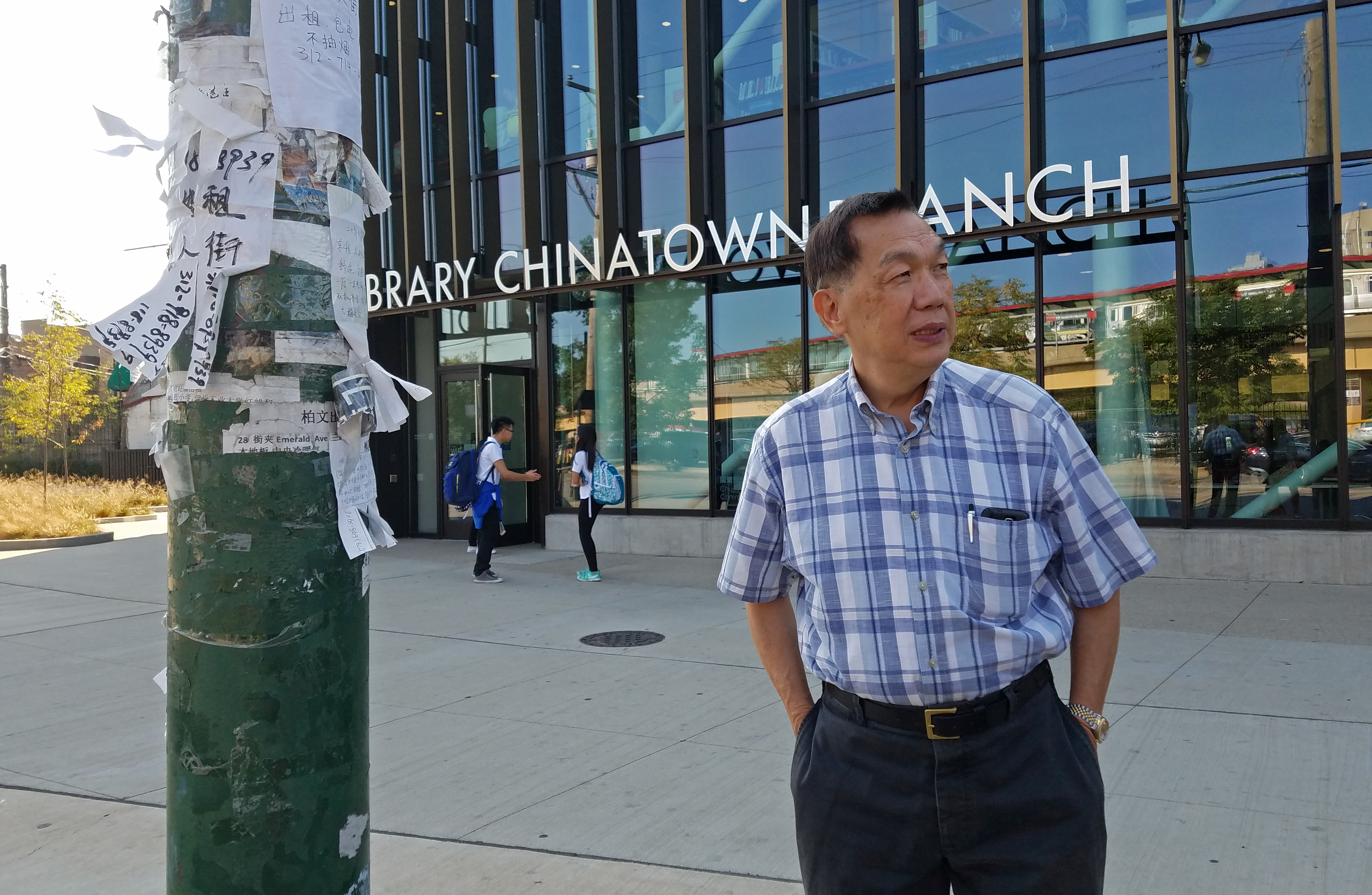 Why do landlords prefer to rent to just Chinese people?

So demand is clearly high, allowing Chinatown landlords to keep their ads limited to largely Chinese community members. But what is it that makes these Chinese tenants so desireable?

We interviewed several Chinatown landlords — directly and through intermediaries. None of the landlords wanted to use their names. One intermediary said Chinese landlords don’t like to call attention to themselves. Another said some landlords feared they’d face backlash for saying they prefer Chinese tenants.

Their preference for renting to Chinese tenants boiled down to a handful of factors, including language, culture, and affordability. Liu and Chan say they’ve heard many of the same things.

“There is definitely a sense of comfort when you know the person reading the ad may speak the same language as you, and may have similar cultural and traditional values,” Liu says.

When landlords advertise through word of mouth, it also provides an all important “reference” or “connection” — called guanxi in Chinese. This is especially important when Chinatown landlords rent out apartments, rooms or even single beds in the same building where they and their family live, says Chan.

“In Chinatown there is an expectation you fix your own things and if you want [the landlord] to do it, then you are going to get fined, and nobody wants to do that so you might as well do it yourself,” Liu says.

But Chan acknowledges that this do-it-yourself expectation can go too far and even lead to landlords taking advantage of tenants and not making necessary repairs or ignoring real problems.

“In the past decades we have been talking about new initiatives to train people about the rights of the tenants and landlords,” Chan says. “We don’t want want to see a community where the owner has all the power or one where the renter creates difficulty for the owner.”

Although data from a major Chicago tenants’ rights organization shows few complaints from heavily Chinese wards, that may have a cultural component as well.

Chan adds, “But we are working to bring Chinatown in as part of the city and region and to conduct ourselves and our daily business as Americans following our obligations and rights.”

The Chinese want a neighborhood that represents them

For more than a hundred years, Chinatown has been a place where Chinese have been able to access social services and find housing without fear of discrimination. Chan says that the legacy of discrimination against Chinese immigrants has made it important for Chicago’s Chinese community to preserve a neighborhood that remains a safe and welcoming place for new immigrants and for Chinese Americans.

In recent years, the Chinese community has started to assert itself as a political presence in Chicago. Two years ago, the community helped elect Theresa Mah to the Illinois General Assembly. She became the first Chinese American to represent the community in Springfield. Chinatown has also recently procured some major neighborhood improvements. Chan and Liu say they know these changes will also make the area a prime target for displacement and gentrification, which is something they’d like to see Chinatown avoid.

“All Chinatowns were created on the outskirts of downtown where it was initially very slummy,” Liu says. “But when they built it up, suddenly it became good enough for other people. In the gentrification community we say that you know a neighborhood is getting gentrified when a Starbucks arrives and we got our first one [in September].”

So, is Chinatown open to outsiders?

Although Chan would like to see improvements in landlord tenant relationships, he says he doesn’t believe landlord preferences for Chinese tenants are likely to disappear.

So does any of this violate the Fair Housing Act, which is meant to protect renters and buyers from discrimination? The law prohibits, among other things, refusing to rent or sell, falsely denying availability, and setting different rules for potential tenants based on group affiliation.

“I don’t know if it violates the letter of the law,” says Allison Bethel, who directs the Fair Housing Clinic at the John Marshall Law School. “But it definitely violates the spirit of the law, which, after all, is to foster more open communities.”

Bethel says this is important because it’s about more than just an apartment.

“In essence, housing segregation robs people of access to quality jobs, education, transportation, health care, and safety, all of which are essential to the well being of our communities,” Bethel says.

But does preference for a certain type of tenant automatically translate to bias?

“I don’t necessarily think it’s a bias,” Liu says. “I think it’s about a sense of comfort that has allowed this community to survive, thrive, and thwart gentrification.”

Indeed, it was the loss of a residential presence — and movement to the suburbs — that led to the demise of other ethnic neighborhoods, like Chicago’s Koreatown. And from that, Chan says, he learned that a commercial strip isn’t enough.

“We saw that residents are the backbone of the community,” he said. “Otherwise it’s just a place to buy groceries and eat a meal. That’s not a community.”

And, finally, Liu says that there’s a real need to maintain a safe place for new immigrants.

“We want there to be a place to have their services met and have groceries and have a place to live and survive in a new busy world,” Liu says.

Still, Chan says he knows it’s going to be a tricky balancing act.

“So on one hand we want to preserve the community where we can continue to grow,” he says. “We have been recognized as the only thriving Chinatown in North America where Chinese Americans feel comfortable and feel they are able to stick around and live in the neighborhood. But, at the same time, we want to make sure the community is welcoming to non-Chinese.” 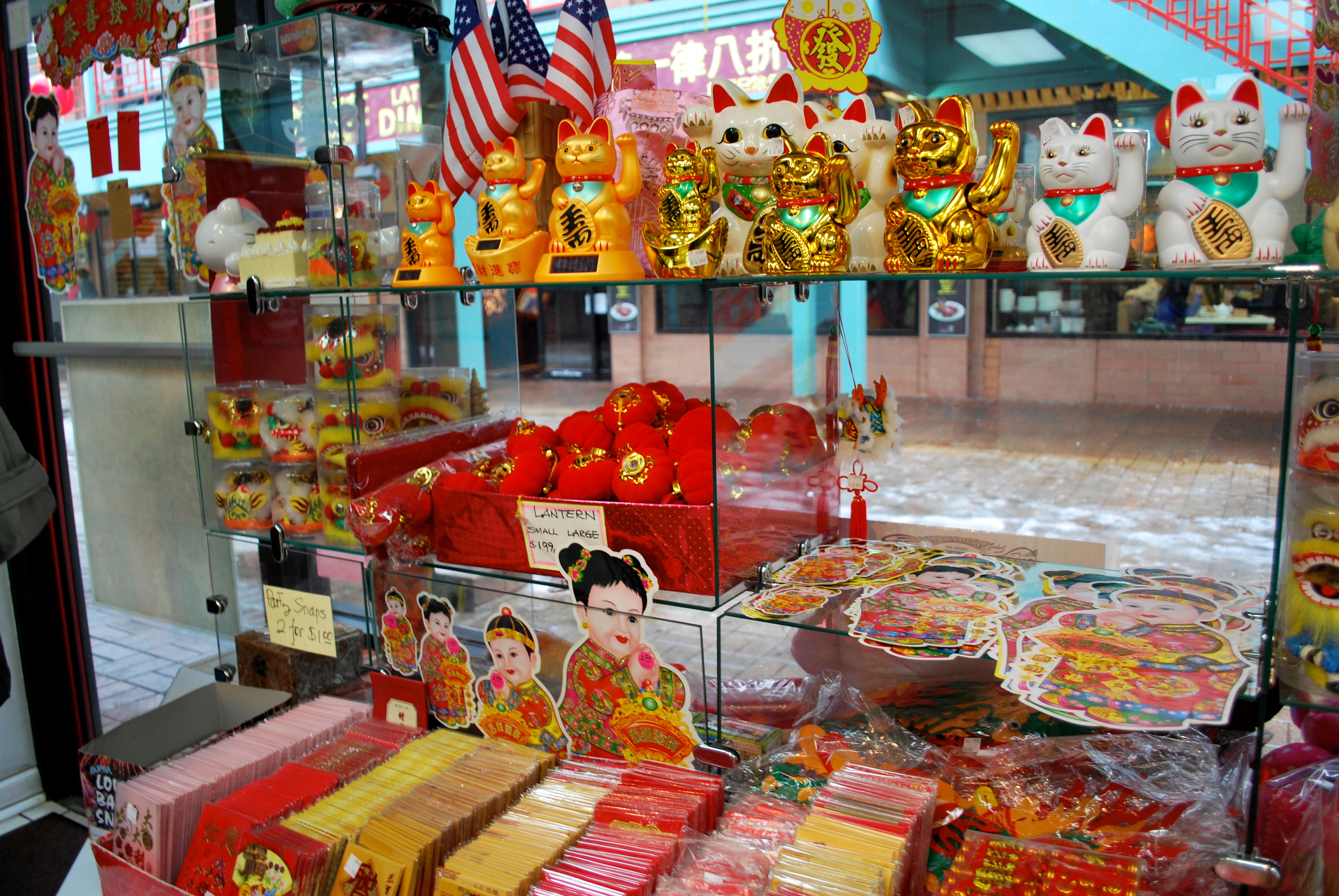 So does that mean someone might actually rent to Mallory?

But if current trends continue, it’s unlikely there would be additional vacancies. Curious City took all this back to Mallory and asked her if it offends her that landlords would prefer Chinese tenants over her.

“No, not really,” she says. “[Because they’re saying] we have this community we want to protect and we want to be welcoming to people coming into the country. And I think that’s beautiful. To me it’s a ten block radius that’s largely out of my reach, which is fine because I can get a place somewhere else.” 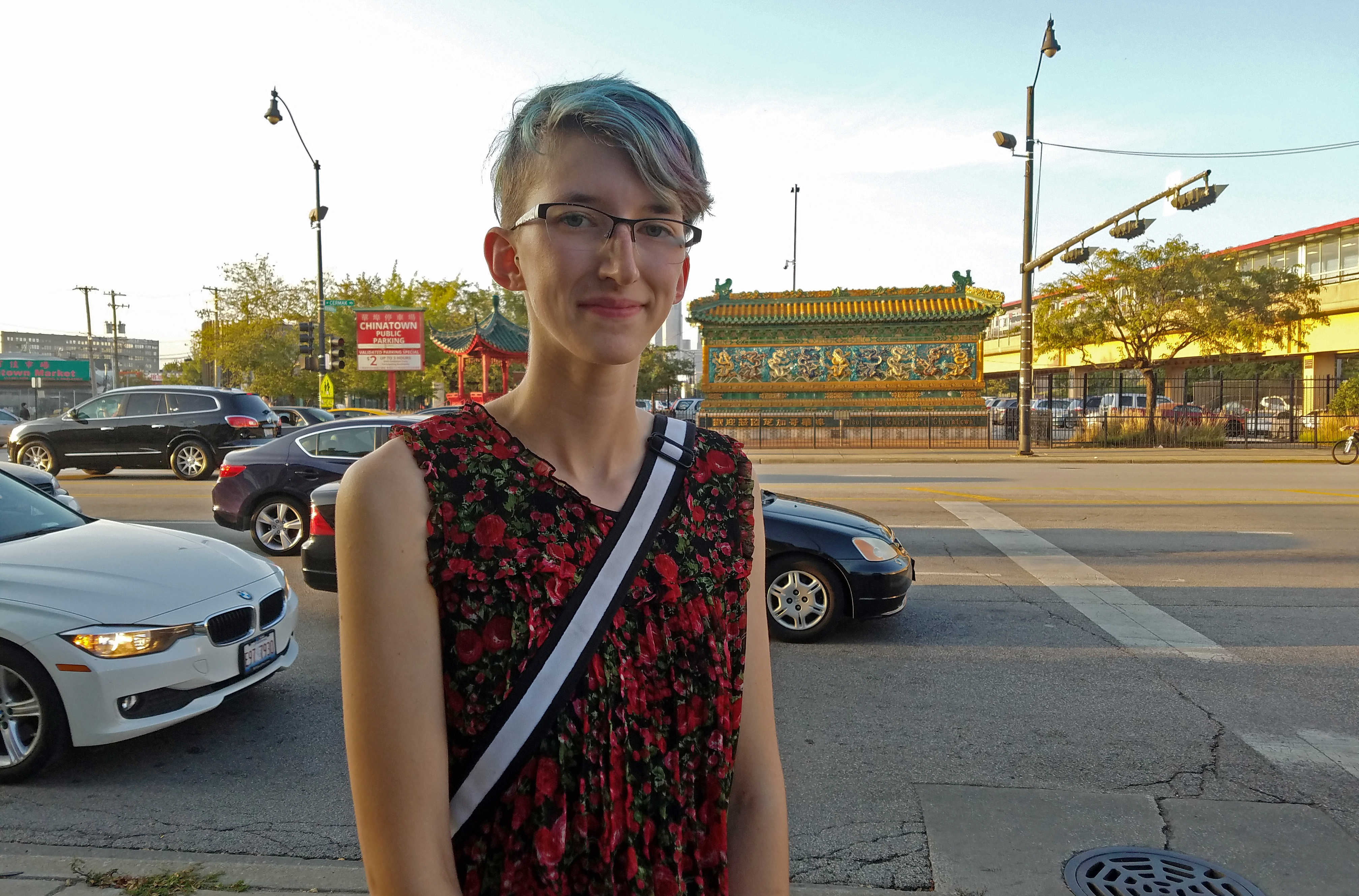 Mallory VanMeeter is an Indiana native who moved to Chicago to attend the University of Chicago. She majored in anthropology and gender and sexuality studies.

Today she works at the U of C’s Chapin Hall, a policy research groups that looks at issues around vulnerable children and families.

Mallory says she likes making art, playing video games and going hiking in the Indiana Dunes. But she also loves exploring Chicago neighborhoods, which is what led to her to curiosity about Chinatown apartments.

She said she initially assumed the lack of rental ads was because of language, and that many Chinese landlords would have preferred to have someone with whom they could communicate. But she was surprised to learn that Chinese tenants and landlords have  different expectations about the kinds of services landlords are expected to provide.

Mallory said the answer to the question also got her thinking about how Chicago’s Chinatown was founded — as a neighborhood for people who had been pushed out of downtown a century ago and were unwelcome in many other neighborhoods.  And she says she could see how that history might shape their desire to preserve the neighborhood.

“For the Chinese community, that was a neighborhood where they were cordoned off to begin with,” she says. “So the fact that it’s now a source of comfort for that to be an ethnic enclave does not seem problematic to me.”