At her big campaign kickoff rally back in June, Hillary Clinton delivered a line about the glass ceiling she hopes to break.

Over the weekend, both Bernie Sanders and Hillary Clinton brought their presidential campaigns to New Hampshire — a state where, in 2008, 56 percent of Democratic primary voters were women. You might think Clinton has the women's vote locked up— but in talking to women on the campaign trail, that doesn't seem to be the case.

"I think [Bernie Sanders] has a lot of good ideas. But at the same time I feel kind of guilty for not supporting Hillary because she is a woman." - Elizabeth Fiske

Reverend Jeanne Fournier said she's convinced now is Clinton's time. She said she's had a sign at her house for 20-some years that reads "A woman's place is in the House, the Senate and the Oval Office."

She gets excited thinking about the message a female president would send to young women and girls.

"You're not just a pretty face. You could lead our country," she said.

But Fournier might be an outlier — many of the women I've interviewed, even at Clinton's own events, don't seem quite so animated by the idea of making history. Identity politics, in this case, may not matter that much.

"Right now I am torn between Bernie and Hillary," said Elizabeth Fiske, a sophomore at the University of New Hampshire. She recently came out to see Clinton talk about college affordability. Fiske is a women's studies major and says her friends keep talking about Bernie Sanders, the Vermont independent. She likes what she hears — which is causing some angst.

"I think he has a lot of good ideas. But at the same time I feel kind of guilty for not supporting Hillary because she is a woman," she said. "Because I feel like I should be 'oh we could have a women in a position of power that's really good.' But at the same time, I feel like it shouldn't matter and I should support the politics of it and not the gender or the identity." 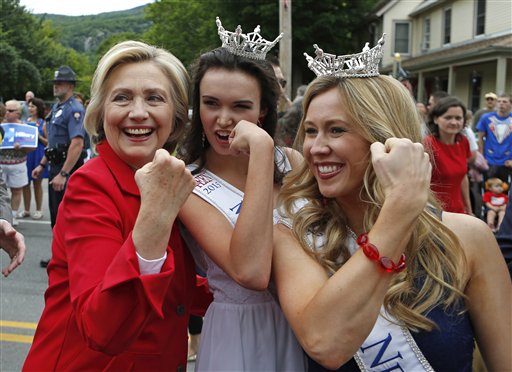 There's a sense especially among younger women that it doesn't have to be Clinton. If it doesn't happen now, they are sure it will happen in their lifetime. But it's not just the college set.

"I would like to see a woman president, but that doesn't mean I would want to see any woman as president," said Marjorie Smith, who serves in the New Hampshire House of Representatives.

Smith was sitting near the back at the Clinton event at the University of New Hampshire campus — still shopping around for a candidate to support in 2016.

"I would like to see a woman president, but that doesn't mean I would want to see any woman as president." - Marjorie Smith

"Would I decide to support a presidential candidate because she's a woman? No," she said. "Would I support a candidate who is a woman? Absolutely, if in fact in the end I think she's the best candidate. And I'm just not there yet."

When Clinton ran in 2008, she downplayed the potential historical significance of her candidacy. She aimed to exude strength, to prove her commander-in-chief credentials. But this time around, her stump speeches includes frequent references to being a grandmother and she has made so-called women's issues centerpieces of her campaign.

Most of the women I interviewed at campaign events said they were judging Clinton on the merits, her ideas, and in some cases her baggage.

Cassidy Davis, a high school senior who drove an hour to see Bernie Sanders speak in Virginia, said she doesn't "appreciate the dishonesty as far as the emails go" when it comes to Clinton. "I understand she had the right to delete them. But ... I'm not going to Hillary. I'm not feeling it

For mother of three Elizabeth Webber, who supports Clinton, the "woman thing" has very little to do with her feelings about the candidate.

"I think she honestly has the experience and the tenacity to get the job done," she said. "I love what she did when she was secretary of state and we need that."

And Webber's three adult daughters tell the story of this campaign right now. One supports Clinton. One supports Sanders. And one is still trying to decide.

— NPR's It's All Politics