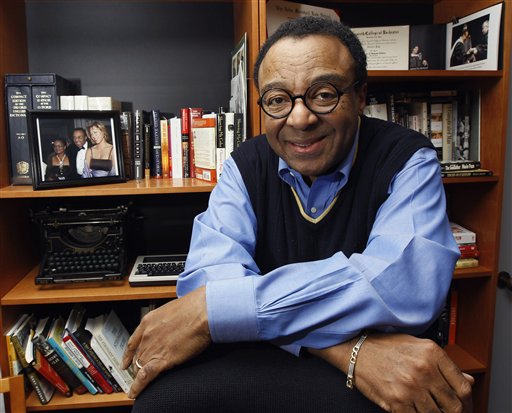 This morning, like thousands of other Chicagoans, I woke to the Chicago Tribune’s story essentially threatening to fire Pulitzer Prize winner Clarence Page, the paper’s most visible African-American writer and arguably one of its most popular staffers, both among the Trib’s readers and his colleagues.

Page’s crime? A breach of editorial policy. He failed to get advanced approval for a speaking gig, and the group he spoke for, MEK, makes the Tribune nervous. MEK is an organization of Iranian exiles opposed to the current government and is currently on the State Department’s list of international terrorist groups.

On face value, it seems like Page appeared before a terrorist group and gave ‘em his nod of approval. But my take? Absurd on both counts. (And, yes, in the interest of total disclosure: Page is a former colleague and a good friend of mine.)

The situation is more nuanced than the Tribune would have us believe. First, Page is not a reporter. He’s an opinion page columnist paid to give his personal take on things. He’s not paid to be equivocal or tepid, but to write about things that get people going. He’s paid to elaborate on issues even if his final conclusion contradicts the Tribune’s own editorial stand. That is his job.

Second, Page has an opinion about MEK that is not outside the mainstream: He thinks MEK should be removed from the U.S. terrorist list.

“I remember when Nelson Mandela’s ANC was viewed by political leaders in Washington as a terrorist group, based on information that seemed about as sketchy and outdated as the allegations made against MEK today,” Page told me.

The European Union took MEK, which renounced violence in 2001, off its list of terrorist groups in 2009.

In other words, Page’s opinion on MEK – whether we agree or disagree with it – couldn’t be more timely:

And what were Page’s talking points to this group (he talked for 3 to 5 minutes), besides his belief that they should no longer be considered a terrorist group?

* “Thanks for inviting me to speak up for values I believe we share: Freedom, democracy and respect for human rights for men and women across racial, ethnic and religious lines.
* “I believe we share a desire for regime change in Iran to a more fair and democratic society.
* “The historical record shows – and a variety of experts have told me – how the MEK has been America’s ally in our war against terrorists, but as former White House Chief of Staff Andrew Card has said, the State Department appears to have been left behind with outdated information. Now a federal court has said the State Department should check its relevance.
* “You have allies to whom you should reach out in common cause as long as you advocate the values all decent human beings share. As long as you work for freedom, equality, human rights and democracy, you are not working alone.”

Pretty straightforward, pretty mainstream and very much in keeping with both Page’s job and style.

Of course if the Tribune were to just hang its hat on the appearance itself as a breach of policy, it would look pretty foolish. Opinion writers give their opinion all the time in public appearances on TV, at conventions, graduations, panels, conferences, etc. And they promote their mothership – in Page’s case, the Tribune – every time they do so. (Irony: Besides being an incredibly decent human being, Page is probably one of the Tribune's most loyal foot soldiers. He unabashedly loves the place.)

This morning, Bruce Dold, the Editorial Board Chief at the Trib and Page’s supervisor, said that had Page asked for an OK for this speech, it would have been denied.

“A speaking fee must be approved in advance by a manager, and he did not seek approval on this, and you can't accept a speaking fee from any organization with a special interest group or a publicity interest,” said Dold.

Also in today’s story, Tribune editor in chief Gerould Kern says that Page will return the speaking fees – making it sound like the Tribune is putting its foot down.

But Page had returned the fee before anyone asked him to. “I never cashed the check. Pro-Publica (the first to break the story) called as I was about to instruct my agent to return the money and expenses to reduce suspicions of a conflict of interest,” he said.

The Tribune is crying foul because Page did not follow protocol in notifying Dold about a gig, regardless of what it was. But frankly, that’s just the Trib covering its own butt. Page says that he did, in fact, used to get approval for speaking gigs, then stopped about three years ago; the practice just fell by the wayside. In the last year alone, he’s had at least seven gigs.

Let me just say this: If Page has been that active a speaker recently and the Tribune just woke up to the fact that he hasn’t been getting approval for his engagements (and I’m betting he’s not the only one), the problem is not just Page’s. The idea that there might be further action against Page, as Kern suggests, would be a gross abuse of power and an ugly singling out of an exceptional employee.

In nearly 30 years as a professional journalist, Page has never, ever, been involved in any kind of questioning of his professionalism or ethics.

“Since I was first hired as a reporter in 1969 and rehired as a columnist and editorial writer in 1984 (after four years in TV), I’ve had a record of which I have been quite proud,” said Page, the sadness in his voice palpable. “I’m much more comfortable covering scandals than being in one.”

What the Tribune needs to do is re-evaluate its policy, and the enforcement of that policy, on outside employment, particularly as it pertains to speaking and public appearances.