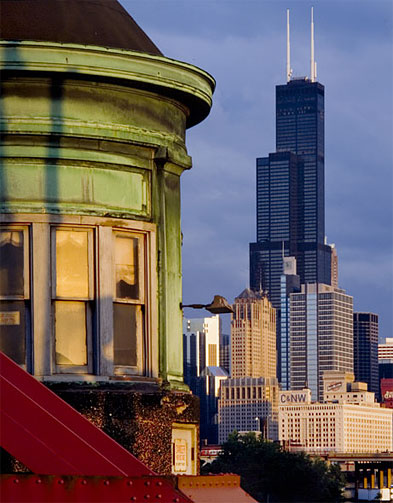 Willis Tower, downtown's 1,450 ft. stack of architecture, engineering, commerce and civic pride, turns 40 next year.
If you are of a certain age, that milestone might be as jarring as the fact that the Willis — the world's tallest building as recently as 1998 — is soon to be "only" the eighth tallest building on the planet. (It gets worse: In China, Korea and Saudi Arabia, there are 11 buildings under construction that are all taller than Willis.)
But reflection often comes at 40. The tower and its history and impact are likely to be re-examined and revisited in the years to come. One such look began this month: a free exhibition of 25 large-scale photographs of the tower, made by architectural photographer Mark Ballogg, that is now on display in the lobby of the Willis.
Called Willis Tower: Look Up, Look Down, Look Around, the exhibit not only documents the tower and its lobbies, but it shows how the building looms  — almost omnipresent — over the city's landscape. On the eve of the exhibit's opening reception Thursday evening at the tower, Ballogg answered a few questions about his work and the building.

For decades, this was the building that symbolized Chicago. Does the tower still capture our imaginations the way it used to? Why or why not?

By virtue of its height, history and long standing presence in the Chicago skyline, I think that Willis Tower still commands the world's attention as much today as it did in the past. Shortly after the World Trade Center was brought down, one of the the first buildings in the U.S. considered to be at risk was the Willis Tower. Thousands of worldwide tourists visit the Willis Skydeck for vistas that can’t be matched by any other building in Chicago. Obviously the rest of the world sees the Willis Tower as the building that represents Chicago.

The tower seems to have various personalities in your work. In many photos, it's the giant icon. In others, [such as in the photos above and below] it's in the background  — but very much there.

As I travel throughout the city and suburbs I am always surprised by the unexpected ways that the Willis Tower pops into view. Some of the images in the show are part of an ongoing personal project in which I shoot cityscapes that always feature the Willis Tower somewhere in the photo. It’s the juxtaposition of the Willis Tower as a secondary element within the urban context that fascinates me. This aspect adds to the iconographic importance of the Willis Tower. 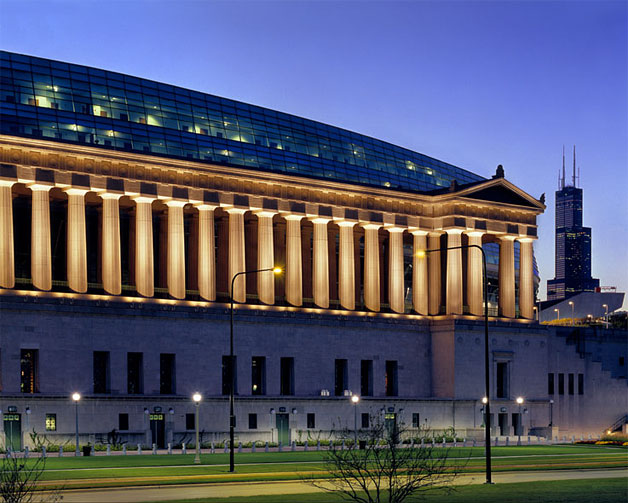 What's the hardest thing about making photographs of a building this size? And what kind of equipment did you use?

I switched from 4x5 film to 35mm digital about http://www.balloggphoto.com/show.html years ago. I shoot primarily with a full frame Canon DSLR and have worked my way through various camera bodies over the years, starting with a EOS-1Ds Mark II and presently with an EOS-1D X. Lenses range from 14mm-200mm fixed and zoom. Equipment is just a tool that allows me to capture the images that best suit my intent. The height of the building has its disadvantages and advantages. It’s nearly impossible to shoot from the street level within a block radius but it becomes a dominant structure as the distance from the building increases. 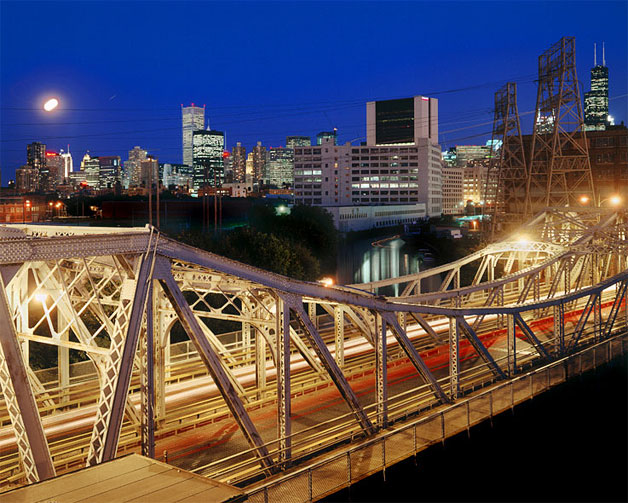 What do you hope people get out this exhibit? What will they discover?

Most importantly for all of my exhibitions, I hope that people are enthralled and surprised by my work and always discover something fresh with each viewing. For the work in this exhibition, I hope they get a sense of the Willis Tower’s commanding presence in the Chicago skyline and keep an eye out for it to pop into their view as they travel in and around the city.

What's a good story about the tower that you've either heard or experiences yourself?

I recently read that the naming rights to the building expire in 2024 and the building could be renamed again. "Sears Tower," anyone?

The opening reception begins at 5:30 p.m. in the Wacker Drive lobby of the tower.