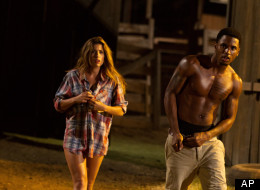 The winter movie season tends to be a dumping ground for movies that couldn’t hack it anywhere else—whether they’re risky business for a studio that feels they might be a tough sell to audiences (the re-cut, hyper-violent Gangster Squad) or a studio red-headed stepchild that has flop written all over it (the long-delayed Hansel and Gretel: Witch Hunters).The A.V. Club recently referred to January as the "least-wonderful time of the year." But this winter, we’re seeing an emerging trend on top of our yearly pile of holiday coal: a stinking heap of slut-shaming and sex negativity.
To be fair, this isn’t the first time that slut shaming has reared its sexist head in TV or film. The WB’s golden age programming had a marked tendency to punish its female characters for losing their virginity. Both Gilmore Girls and Felicity have their young leads engage in infidelity for their first times, which leads to retribution and (in the case of Rory Gilmore) being shipped off to Europe for the summer like Daisy Miller. In Buffy the Vampire Slayer, Buffy Summers’ undead boyfriend loses his soul and tries to kill all of her friends after they have sex. The premium is put on maintaining one’s virginity, and if any form of sexuality is shown, it’s harmful and dangerous.

Cinema sometimes subverts these norms—like The Devil Wears Prada—but the more common example is a film like What’s Your Number?, which tells women that having sex with too many people is bad. If you're a slut, no one will ever love you and you’ll be doomed to be alone. It’s like that scene in Mean Girls where a sex-ed counselor tells girls that if they have sex, they will get pregnant and die. This is not how Judy Blume said it would be.

Michael Tiddes’ A Haunted House (aka that movie starring a bunch of Wayanses) gives us a great example of Hollywood’s norm of sex negativity, as characters who overtly express their sexualities are lampooned for it. The Wayans’ brothers previous Scary Movie franchise engages in the same behavior, presenting female sexuality in broad caricatures and dichotomies. Women are either fake-breasted sluts or virgins. In A Haunted House, the character most defined by his sexuality is Nick Swardson’s gay psychic, and Swardson can’t get through fifteen seconds of screen time without the movie shaming him for his sexuality. They even pull out a nice lisp and some leather gear to do so. The Wayans oeuvre is not one for subtlety.

As a (terrible) send-up of horror films, A Haunted House both comments on and upholds the horror genre’s tortured relationship to sex—where the virgin lives and the slut dies first. (Joss Whedon’s recent The Cabin in the Woods parodies this trope brilliantly.) If you wanted an example of slut-shaming in horror films for your cinema class, the recent Texas Chainsaw 3D is practically a gift from God, a movie whose characterization of female sexuality is so over the top that you feel like it has to be a joke. Two of the film’s three screenwriters are female, so I sincerely hope this is the case, but Tina Fey assures me it might not be. Seriously, did Mean Girls teach us nothing?

Texas Chainsaw 3D introduces us to two female leads, whose sexual behaviors are diametrically opposed. Alexandra Daddario’s Heather is a classic horror movie good girl in the vein of Jamie Lee Curtis, who looks like Neve Campbell crossed with Tiffani Amber Thiessen. She’s shown to be somewhat sexually active, but far more conservative than her friend Nikki, whose dress and nomenclature suggest she’s auditioning for Showgirls II: Revenge of the Kibble. Almost every line of Nikki’s dialogue that graces our ears is about having sex, hooking up or boys—but Raymonde plays Nikki with enough winking irony that you know she understands what she’s dealing with here. During a panel discussion about the film, the Lost actress was a good sport about her character’s limitations: “That was another pleasure of mine, to fulfill the iconic stereotype role of the bimbo in the horror movie.”

Despite the brains behind the boobs, the movie treats Nikki with a strange amount of disdain and spends a great deal of screen time setting her up for a slut takedown. Throughout the film, Nikki goes after Heather’s boyfriend (played by rapper Trey Songz, obviously) like a drunken, heat-seeking missile, and finally lands him in a barn by getting him liquored up. She all but has to force him to get him to have sex with her, which the movie is then able to punish her for by brutally slaughtering her. Whereas Mr. Songz’s death gets to take place off camera, the film revels in watching her pay.

The same behaviors take place in Jack Reacher, a movie that’s been steamrolled at the box office by Django Unchained and Les Miz ever since it was released. Buried in the pre-Christmas onslaught, the film portrays Tom Cruise as a loner vigilante working with and against the police to track down a serial killer, played with reliable surreal gusto by the mad German auteur Werner Herzog. While hunting down the bad guys, the film serves as a love letter to Tom Cruise’s apparently irresistible sex appeal, as almost every woman he encounters throws themselves in front of him to have sex with him. In an uncomfortable scene, even an old lady cashier gives him the sex-me-now eye. He declines, because he's too good for sex. Jack Reacher is above that sort of thing.

One of the women dying to be with him is the scantily clad Sandy, who approaches the much older Cruise in a bar and offers to go to bed with him. For reasons that the plot will attempt to explain later, Cruise turns down her offer, at first mistaking her for a hooker, and then repeatedly calls her a “slut”—until the men she’s with try to beat him up. (Because it’s a Tom Cruise movie, he’s able to fight all of them off.) However, the movie is not done with Sandy, and Cruise will track her down again later to give her a bizarre speech about her life choices and why she needs to change her filthy, whorish ways. Sandy doesn’t turn her life around, so someone punches her in the head and she dies. No more Sandy.

What’s interesting here is that the movie finds the idea of Tom Cruise being an insatiable lothario so permissible that it’s able to ram it down our throats—but if a woman expresses herself sexually, she gets killed for it. What is this, the Taliban?

Even the movies that do a better job on issues of female sexuality have an odd relationship with the secular flesh. Take the Oscar-nominated Zero Dark Thirty, which is a landmark in rewriting the rules of women in film. Jessica Chastain’s Maya lives for her job, so much so that she views the idea of having sex with her co-workers “unbecoming.” When another female employee, played by Meryl Streep look-alike Jennifer Ehle, suggests that she relax and let her hair down, Maya insists, “I’m not the girl who f**ks.” In order for Maya to be respected at what she does, she’s not allowed to be sexually active at all, and Maya looks down on those without her brand of sexual ethics. All this does is replace one set of sexual standards for another, rather than just allowing women to make their own choices.

Although the film is meant to be a statement about the hyper-sexualization of women in cinema and a cry against patriarchy, this only upholds the overarching sex negativity in Hollywood, where sex is a four letter word. Last year’s public slut-shaming of Kristen Stewart and the industry’s complicity in dumping her career only showed how much progress needs to be made on the issue. We need to change a culture where women are thrown under the bus for cheating, and men get to keep their jobs and careers. The slut shaming we see in such films as Texas Chainsaw 3D is a reflection of that puritanical mindset, one that we reinforce by throwing money at it.

If there’s any hope for sluts at the cinema, you’ll find it in films like Will Gluck’s Easy A or David O. Russell’s Silver Linings Playbook, which aren’t perfect but are a huge step in the right direction. In Silver Linings’, Jennifer Lawrence’s Tiffany plays a widow who went through a promiscuous period after her husband’s death, about which her romantic interest, Bradley Cooper’s Pat, gives her a hard time. Rather than apologizing for her past, Lawrence owns her sexual history. When Pat calls her a “big slut,” she retorts, “There's always going to be a part of me that's sloppy and dirty, but I like that, just like all the other parts of myself.”

Sure, Tiffany has to reinforce the idea that she’s not a slut anymore to assuage Pat’s fears, but a mainstream movie that even flirts with sex positivity is a revelation. Although outspoken young actresses like Jennifer Lawrence and Olivia Thirlby—who mentioned in a recent interview that she self-identifies as a “slut”—are ready and able to break the boundaries of how Hollywood portrays women, they need directors, producers and writers who are willing to go on that journey with them. Rather than continuing to perpetuate damaging norms and then cheekily playing along, we need to stop teaching young women that their bodies are bodies are disposable and they deserve to die for having sex. If we want to empower women, we have to stop being ironic about sexism and start actually doing something about it.