For the most part, the protests didn't really resonate on an international scale. President Obama stole the headlines yesterday and this morning with his NATO plan for withdrawal from the war in Afghanistan. But the bigger story is that this protest didn't go viral. There was a lot of talk about how many people showed up downtown (fewer than expected), but really, the protests always play out online. In this case, there wasn't a huge story to share.

Reddit had no stories of NATO and the protests on the first two pages. Digg (less relevant) has nothing. The live-blog/tweet/stream media was robust, but the stories died shortly after. NATO did not go viral.

So let's recap the weekend with winners/losers: 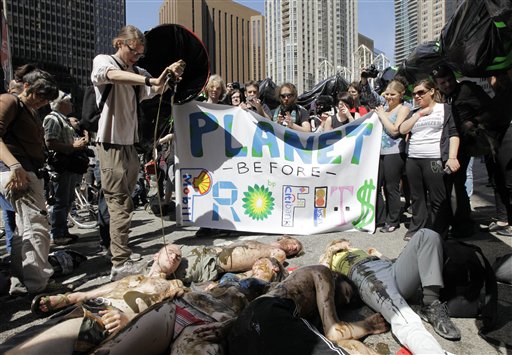 Winner: Phil Rogers. Rogers is a longtime reporter for NBC 5 Chicago. He and a cameraman positioned themselves right on the front line of the protest at Cermak and Michigan Sunday night. NBC 5 went live with the coverage for an hour and a half, pretty much leaning on the intel and descriptions Rogers provided. He spoke on the phone and set the scene, even when the police marched forward and didn't heed the advice of the anchors to get to safety when it got rough. In fact, most of his reporting was done while one shoulder touched a riot shield and the other a bloody protester. Must-watch TV finally returned to NBC 5.

Winner: Ustream. The revolution will not be televised. Yes, you are right. It will be streamed. Chicagoan Tim Pool and his popular live stream "Timcast" took hits away from mainstream media as hundreds of thousands of viewers flocked to his stream and others to get an unanchored, unvetted look at the protests. It was a much more reliable source of info. Funny sidenote (not funny to Tim Pool), but he and his crew were pulled over by 12 police cars on Friday or Saturday night. They came up on them with guns drawn. How do I know? It was live-streamed. It seemed like Tim got someone's attention. Yikes.

Loser: Objectivity. The anchored coverage of the big protest on Sunday gave local TV plenty to talk about. Wait, scratch that, plenty to opine on. WGN 9 seemed to have it out for the protesters, with John Kass and company really laying into the protesters, siding with police. And on the other side, cable news took a long view and watched footage (particularly CNN) and chided the police in the live TV moment (although there were some reports the blood on a protester's face was fake, for the purposes of getting a media reaction). At any rate, anchors had a hard time holding back their disdain for either side.

Winner: Chicago Tribune. If you were out of town avoiding NATO or you were like the 99 percent of Chicago that avoided the protest area, have no fear. The Chicago Tribune and their photography department put their best foot forward with a tremendous collection from the full NATO weekend. It really is striking to view these photos. Not only that, but they did a great live blog with constant updates and really utilized their fully-staffed newsroom to cover the hell out of this summit. Kudos. I think this goes for most new outlets.