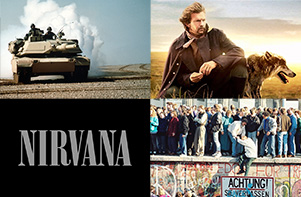 Where were you in 1990? The United States launched Operation Desert Storm, Aerosmith appeared on Wayne’s World, East and West Germany reunited, Kevin Costner danced with wolves, Nelson Mandela was released from prison, internet pioneers wrote the first web page, and “grunge” music exploded as Milli Vanilli imploded. Even if you weren’t yet born, the events of 1990 have influenced you.

Six WBEZ personalities, along with six cutting-edge storytellers and poets, will work through the year – month-by-month, one compelling tale at a time – to bring that pivotal year alive again.

WBEZ91.5 presents this program as part of their celebration: Chicago Amplified: 25 Years of Independent Media.

This program is presented in partnership with Chicago Humanities Festival.