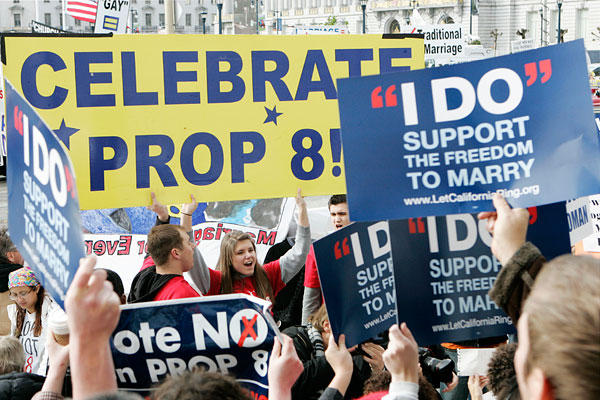 F. Scott Fitzgerald once wrote that intelligence is the “ability to hold two opposed ideas in the mind at the same time, and still retain the ability to function.”

I thought of Fitzgerald today as SCOTUS deliberated on Prop 8 and God was flooded with prayers from queer people to strike Scalia dead and friends flooded my Facebook feed with equal signs to show their support for marriage equality. It should have been an easy decision, right? I click a button, make a red mathematical mark my profile pic and then go back to watching Bob’s Burgers instead of being productive.

But I didn’t do it. I couldn’t do it. I support marriage equality, but my support deserves more explanation than a simple photograph can explain, and I saw a number of fights break out on Facebook as people struggled to articulate their mixed emotions on marriage to friends and family. Our politics are complicated. A picture might speak a thousand words, but in this case, those would be the wrong ones. These are my thousand words. They are my own.

As a queer person and a human person who respects the dignity of all people, I support everyone’s right to love and to have that love recognized, if they so choose. I support my friends who have waited for years and decades to do something that Britney Spears can do when she’s drunk.

I support everyone’s right to have whatever beautifully imperfect love they want, to strive to do better than their parents and fail sometimes and post pictures of it on Facebook. One day, I spent an hour and a half looking through Facebook photos of my favorite professor and her partner’s preposterously adorable twins, which they dress in matching baby jumpers. They even dressed them up like chickens for Halloween. Motherflipping chickens. How can I not support baby poultry? I’m not a monster.

However, supporting and affirming their marriages doesn't mean I have to support marriage as a concept or believe it should be the issue sweeping our social media. I want to see people coming together to think critically about assimilation and what marriage, as a value, means for us. Same-sex marriage isn't a shortcut to queer liberation, and it's not just society's views on who can get married that need to evolve. It's marriage.

Of all people, I feel that Rufus Wainwright put it best. Wainwright is a libertarian (like our good friend Ron Swanson) and doesn’t believe in marriage in general. When asked about it his feelings on marriage equality back in 2008, Mr. Wainwright quipped:

“Oddly enough, I’m actually not a huge gay marriage supporter. I personally don’t want to get married but I think that any law or amendment to the constitution that deals with sex and love should just be banned in general. I don’t think any government should encroach on what goes on in the bedroom at all. Frankly, if you want to marry a dog, why don’t you go ahead and marry a dog, I don’t care.”

But despite his opposition to marriage in general, Wainwright affirmed his belief in the individual’s right to decide for themselves: “A girl likes options," he said. "Maybe someday I will want to marry.”

I agree with Wainwright (who later did get married to his partner). I believe in a person’s right to choose the relationship that’s right for them, whether that’s a beautiful lesbian family with heartbreakingly photogenic children or no family at all. I also want to celebrate the unattached people and everyone who resists our culture of Singleism and doesn’t confer rights to healthcare and visitation just because they’re in a relationship the state approves of. 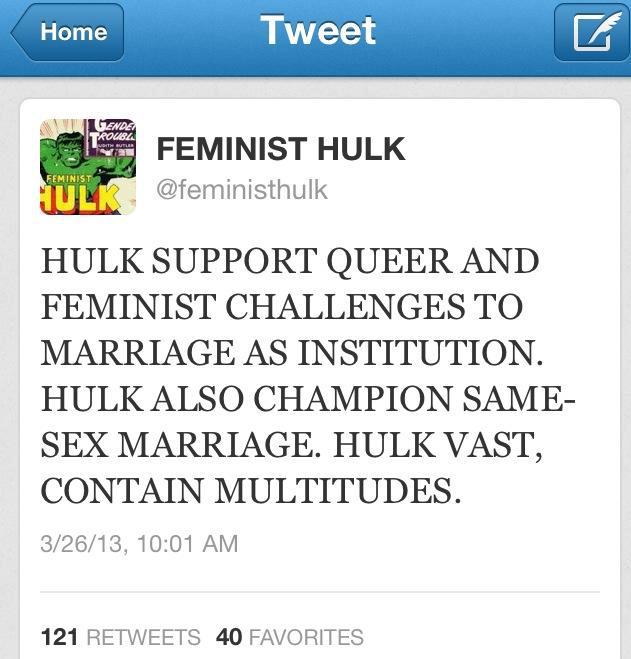 Instead, I think that we need to do more work to give the benefits of marriage to everyone. Single folks deserve healthcare, just like poly folks shouldn’t have to decide which of their partners gets to have rights and which do not. While we figure out what the Affordable Healthcare Act means for queer and trans* folks, we must continue to fight for our community health, including the people that marriage leaves out.

The problem is that marriage, as an ideology, speaks to a homonormative subset of the community, where our worth is predicated on our ability to fit into a straight-approved archetype of "gay identity." It asks us to be a part of the new normal, rather than critiquing the idea of a normal existing at all. Instead, we need to fight for the people outside of the box and their right to critique the box and tear down the box. We need to recognize the institutions that created the box, ask whose agenda the box really serves and question why we need a box at all. Screw the box.

We can support our friends who want to get married while realizing that marriage doesn’t speak to all of our experiences, reflecting on those whose systemic issues marriage can’t fix. What about the queer and trans* youth who don’t need a ring to fix their problems? We need to put a roof on it, providing shelter for all those who need solace and refuge. All of us deserve love, whether that love is a piece of paper that speaks to decades of struggle for recognition or having a community that supports you and gives you the safe spaces you need.

Our love needs to be bigger, greater and more inclusive. Our love needs to stop asking trans* people to wait their turn, to start recognize bisexuals as even existing and to work to create a culture that isn’t just marriage positive: it’s body positive, fat positive, single positive, sex positive and intersectional. While we fight for marriage equality, we must remember to simply fight for equality.

I know they don’t have a Facebook photo for that, but that’s what I want to see my Facebook feed light up with. I don't want it just to celebrate some of the luminous people I know. I want it to celebrate all of you.