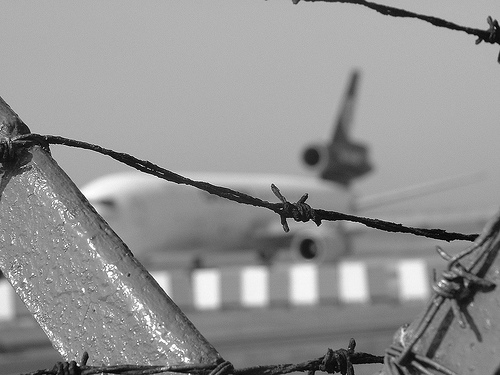 Okay folks, let’s go over something. We all hate flying, unless of course you’re flying first class, in which case, will you marry me? Anyway, it stinks, especially if you’re on a flight that lasts more than a few hours: those impossibly-tiny seats, the zen koan of hell that is the seat-reclining-in-your-face-but-you-also-want-to-recline-YOUR-seat-situation, the movie you don’t really want to watch but will since it’s on but you can’t see it anyway since it looks like it’s in black in white and is two miles ahead of you in the cabin, the snack you’ve resigned yourself to buying but discover that you can’t anyway since somebody ten rows ahead of you ordered the last one. It’s all the worst.

But we live in a society and there are still rules, even if airplane travel seems like the jungle. Listen to me closely: There is no first-come first-serve when it comes to getting off the plane. The people in the front deplane first, and then all us little people in the back exit in order. You don’t get to exit first just because you ran up the aisle the moment the “ding” of mercy went off. You don’t want to get off the plane more than the rest of us do, trust me. Actually, thanks to the exiting bottleneck of everyone frantically trying to unload their suitcases (Hurry! Hurry! Before someone has to wait an extra thirty seconds!), you running up front out of order makes the rest of us who decided to obey the laws of society suffer as a consequence.

Additionally, if people in front of you are sitting as people ahead stand up, they’re not sitting because they don’t want to get off the plane. They’re not thinking “Why did this flight have to end? I really want to finish this issue of Hemispheres!” It’s just that they just don’t feel like standing up for 15 minutes, banging their heads on the overhead compartment, waiting for their turn to exit. So don’t think that you can scoot past them because they are too slow. Imagine their seat as an invisible barrier. You shall not pass.

There is of course the exception wherein you actually have a connection to catch that you need to hurry for, and there are rules for this.

A) Prior to landing, you let a flight attendant know you need to leave the plane quickly

B) An announcement is made to alert everyone that someone from the back will be hurrying off, but not to panic--they have a reason for doing so.

C) You make an apologetic face to everyone as you do so and mutter “Hope I make that connection!” so everyone knows you’re not cheating.

Anyway, just wanted to remind you, we’re all stuck in this hell together and the only thing keeping us between sanity and thinking we see a gremlin on the wing and trying to break the glass are these few rules, and you must obey them. Otherwise, some crabby lady is going to blog about you.