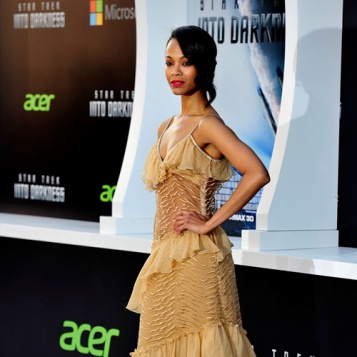 Allure magazine is feeling the backlash after printing the weight of Star Trek Into Darkness star Zoe Saldana on the cover of their June issue.

"115 lbs of grit and heartache" reads the headline. And many people did not like it.
News outlets from Yahoo to The Cut have called out the headline as "bizarre and unnecessary," saying that "everytime we seem to be making progress in the way women are portrayed in magazines, somehow we take a step back."
But Saldana had no qualms about stripping down for Allure, both in posing for semi-nude photos inside the magazine and in unabashedly revealing her digits on the cover:

"I think it would have been wrong if they were lying about my weight," Saldana told the Today show Thursday, "This is how much I weigh, it's something I can't control, it's who I am. I've always been a very thin frame, I was a ballet dancer. I don't think it was to make an issue of my weight. I think it was to say for a lightweight person, I seem to be really strong-minded."

Ah, so what Allure meant to say was that powerhouses often come in small packages. It's a message that tries to be girl-power positive (don't underestimate the gorgeous 5'7'' knockout just because she's thin!) but unfortunately sounds much more like the glorification of an ideal body type than anything else.
Would Allure print the weight of a plus-size actress (say, "215 lbs of grit and heartache") on the cover of their magazine? I highly doubt it.
Saldana may just be small-boned and naturally thin; however, nobody should aspire to be 115 lbs, or any other number that a fashion magazine splashes across its front page as beauty personified.
On the whole, men tend to be more comfortable discussing weight with each other, especially in regards to how much they can bench, eat or drink under the table in a given night. Women, on the other hand, usually approach the subject with an unspoken vow of secrecy and a sting of self-evaluation that's sometimes hot to the touch.
For example, one woman may coyly mention, "I weigh ___ pounds" to her girfriends, and their internal reactions could vary wildly: from sighs of relief ("Phew, I weigh less") to surges of panic ("I weigh so much more than she does") to eye rolls of annoyance ("Ugh, why is she telling us her weight? I don't want to hear it.")
Perhaps the responses we should have to such a disclosure are "Who cares?" and "As long as she's healthy, why should it matter?" After all, most of us feel comfortable talking about sexual preferences and how much our apartments cost with people we barely know; so why is weight still considered a "do not discuss" topic outside of trusted confidantes?
Do these numbers really have such a powerful hold on us that we can't bring ourselves to speak them aloud?
Ultimately, the decision to share your weight or keep it to yourself is a personal one, and should be free of shame on both sides. If Saldana is fine with telling people her weight, and feels no shame in it, then good for her. If other women want to shout their numbers from the rooftops, then they should feel free to do so.
As long as we don't define ourselves by how much we weigh, or determine our self-worth by something so arbitrary as an ever-fluctuating number on a scale, then we can just be and let societal pressures fall by the wayside.
Or as Jennifer Lawrence and I tend to do, deflect all weirdly body-focused questions with "I love french fries" and call it a day.
Leah Pickett writes about popular culture for WBEZ. Follow her on Twitter, Facebook or Tumblr.