Speaking out about a traumatic incident can sometimes be more traumatic than the incident itself.

That was the case for one reporter after she documented the stories of 54 women who said they were sexually harassed while attending this year’s Coachella music festival in Southern California.

That reporter, Vera Papisova, who is the wellness editor for Teen Vogue and runs the magazine’s sexual assault awareness campaign, said she was groped 22 times during the festival while on assignment.

OMG thanks so much for providing the kind of response that explains exactly why most women don’t come forward with their stories. @x52Sky pic.twitter.com/ieS74uY4Y1

“People usually say, ‘Ignore the trolls,’ and ‘Don’t read the comments,’” Papisova told Nerdette’s Greta Johnsen. “I went against both of those. I broke both of those rules.”

Instead of ignoring her cyberbullies, Papisova retweeted them and responded to them to illustrate how difficult it can be to speak out.

“I really just wanted to highlight that what happens after you come forward with a story like this is sometimes just as traumatizing as the initial experience,” Papisova said.

Some of the Twitter posts questioned her reporting. Others threatened Papisova with violence. Some are too graphic to share.

Papisova spoke with us about her experience at the festival, how she responded to the threats against her, and how she’s maintaining her sanity in the face of online harassment. Below are highlights from the conversation.

‘What did you expect? Men will be men.’ 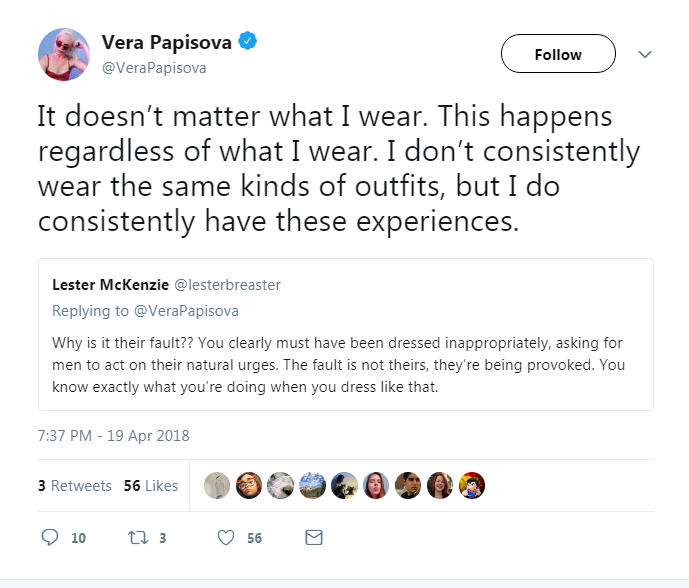 Vera Papisova: It really bothers me because I know a lot of men who have much higher standards for themselves, and I think it’s really insulting to have such a low bar for an entire gender.

And I don’t think that that’s true. I don’t think that men will be men and boys will be boys and we should expect men to be horrible people. And actually some of the people I interviewed talked about how when they were harassed at a music festival like Coachella, what really changed the entire experience and what made them feel safer is when another man would step in. So I think we need to be highlighting more of those stories.

‘Her story is false’ 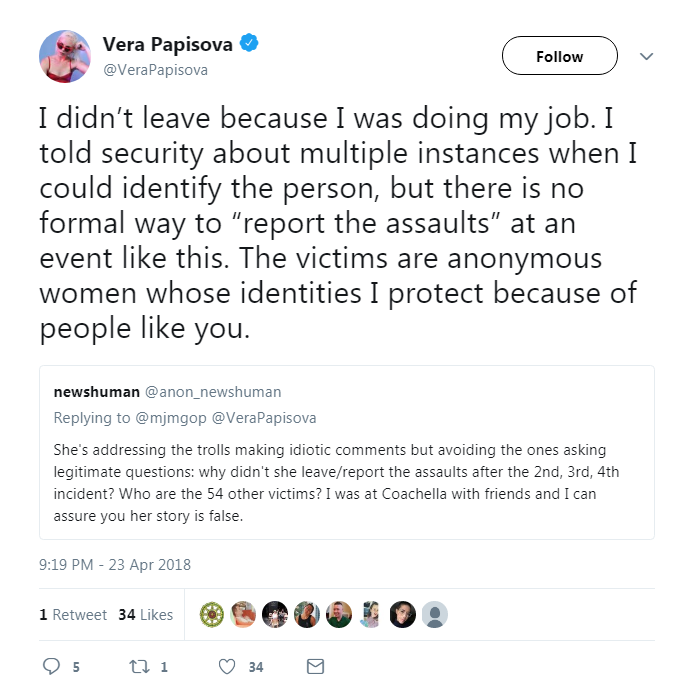 Papisova: I think that anyone who doesn’t want to believe that this happens or that this happened — I mean, I just think it’s more about them than about me. I think something about this story is making that person uncomfortable, right? So what is it about something that they’ve experienced or maybe something that they’ve done where, if this story were true, how would that be hurting their version of reality?

Papisova: Imagine getting a text from a phone number that you don’t know. So you don’t really know who’s saying it and you don’t know how serious it is.

And I mean, it sucks. It really does. It’s really scary. It makes you feel unsafe. And I don’t wish it on anyone, but also at the same time there are a lot of people who do deal with this all the time and they don’t even have the platform I have. Like anyone who’s an outspoken LGBTQ advocate, women of color. Whether they’re politically active or not, if they’re generally marginalized people, then the internet is kind of a horrible place. 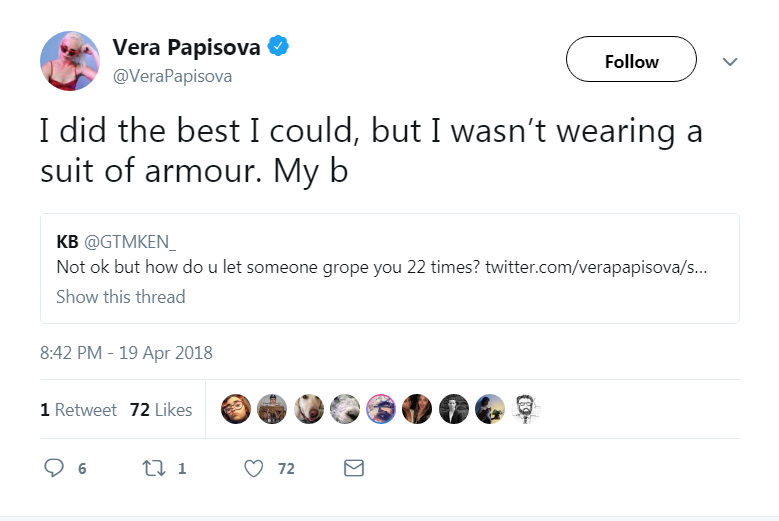 Has it been worth it?

Papisova: It was worth it from the first person who reached out to me and said, “Thank you. This has happened to me. And I feel so much better now that I realize this is a real issue that happens to people every day.”

How she’s been powering up

Papisova: I do cover the majority of trauma-related stories, so I end up absorbing a lot of people’s trauma. Sometimes it’s really difficult. Other times it’s really healing if it’s something that I’ve experienced. My executive editor, Samhita Mukhopadhyay, she was like, “I like feeling like I’m not the only one who just went through this.” And I actually agree with that.

But in terms of what I do take care of myself in general, and when you’re talking about recharging your battery, I think it’s important to look at what’s draining your battery. I always think about when your phone battery’s going out really quickly everyone’s like, “Just make sure you know how many apps are running in the background and close all of those apps.”

And I just think about what apps are running in the background that you don’t even realize are draining you. That might be a relationship. That might be a certain path that you walk when you’re commuting to work — maybe there’s a specific street or block that stresses you out. So I think it’s important to at least identify what’s draining you, because it’s not just work. It can be things that you didn’t even realize. I definitely check in with myself.

Sharing a sexual assault story (or stories) is often met with harassment and shame (see my timeline.)

We asked sexual assault survivors to write the messages they wish they’d received after their assaults.