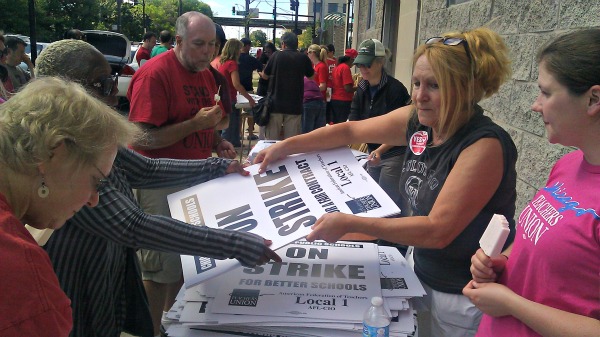 Lead Story: It was a weekend full of long, heated negotiations late into the night. Then, CTU president Karen Lewis announced at a 10 p.m. press conference Sunday that the strike was on, the first teachers strike in the city in 25 years. The issues between the two sides are legion: a school-year calendar, longer school days, class size, etc. Yet during Lewis' conference last night, many reporters kept pushing the question about pay and compensation, something Lewis even chastized reporters for. Rest assured, over the coming hours and days, we'll hear much, much more about the smaller nuances of the disputed talks as well as the bigger picture issues. While the sides are close to a deal in some regards, the general feeling is that this could be a while.

Also: The NFL is back in full swing! The Colts’ Andrew Luck had a tough slog as the Bears overcame some early gaffes en route to a 41-21 clubbing of Indy at Soldier Field on Sunday. The Colts struck first on an early Jay Cutler interception deep in Bears territory, the Bears rattled off 17 straight points to take a lead they wouldn’t relent, driven by Cutler’s 333 passing yards which included two touchdowns. New receiver Brandon Marshall was Cutler’s favorite target, hauling in nine receptions for 119 yards and a touchdown. It was a solid game after a disastrous start, but things don’t get easier: Next up is a trip to Lambeau Field Thursday night to take on the rival Packers on short rest.

And then: After a summer of mystery, Illinois U.S. Rep. Jesse Jackson, Jr. left the Mayo Clinic, where he received treatment for bipolar depression, and returned to his Washington, D.C. home with his family. Chief-of-staff Rick Bryant said he’s “hopeful” Jackson will be back in Congress when it opens its fall session today, but there's no official word and his official return date is unknown. Among those encouraging Jackson to take a slow path back to work is his father, Rev. Jesse Jackson, who denied the report about him being back Monday. Still, the question remains: What of Jackson, Jr.’s future?

Finally
In honor of yesterday’s start to the NFL season (with two more games to go Monday night!), here’s every NFL fan in 90 seconds.