Phillip Cantor got called into an emergency meeting last week at the school where he teaches—North-Grand High School on Chicago’s West Side. The district’s central office had just sent over the budget for the coming school year.

“We had some cuts at our school, but seemed to be doing better than other schools in our area,” Cantor, who's chair of the Science Department, said. “And then we realized when we got further into the budget, we were losing $318,000 specifically for special ed services.”

It would mean the school would have to cut about three special education teachers or six full-time aides.

Cantor said there’s no way it would work.

Earlier this month, Jesse Ruiz, the vice president of the School Board who at the time was leading the district interim CPS CEO, announced that more than 500 special education teachers would be laid off districtwide. Chicago Mayor Rahm Emanuel called the cuts, which included special ed, “unconscionable and intolerable.”

The move, he said, came after Chicago Public Schools conducted an 18-month review of services and staffing for students with special needs and found that even as enrollment in special ed was declining, the number of staff was increasing.

“The long-term goal is for more students with unique learning needs to be able to receive services at their neighborhood schools,” he said.

But the district has kept pretty quiet about how it’s going about making changes to how special education is delivered.

“When we looked more closely, there was a line in the budget that said All Means All pilot,” Cantorsaid.

If you haven’t heard of All Means All, you’re not alone. The district made no formal announcement about it and some of the 102 schools now in the pilot didn’t know they would be part of it until their budgets came. Last year, about two dozen schools were part of the program.

Internal district documents provided to WBEZ outline how the All Means All program is designed, and it’s complicated, but boils down to what some call “student-based budgeting for special education.”

The internal document about All Means All did not list the actual per pupil amounts for students with special needs. CPS spokeswoman Emily Bittner provided the following chart to WBEZ. 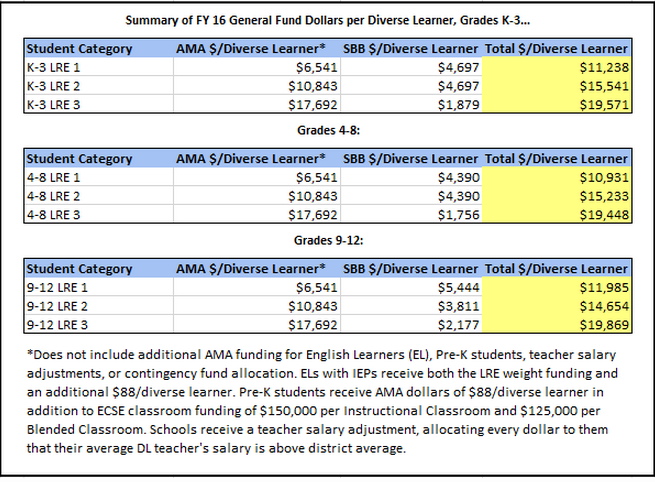 *CPS refers to students with special needs as “diverse learners”. They get a base amount under the main student-based budgeting formula, reflected in the Column 2. Column 1 includes the flat amounts per student for additional special education services under “All Means All.” Added together, in Column 3, is the total amount a school will get for a student with special needs in each category. These amounts are being used at just 102 schools this year. The remaining 500-plus schools will continue to be staffed under the old formula, where the Board provides positions based on enrollment and need.

The system is meant to give principals more flexibility and bring the funding formula for special education in line with the formula for all students in CPS. Student-based budgeting is something many urban districts are using now. In theory, money follows students, creating a more equitable formula.

But its roll out in Chicago was not well-received, in part because it came at a time of financial crisis and at many schools, the total amount of funding has not been enough to cover existing programs and staff.

But having money follow students gets more complicated with special education, Cantor points out. That’s because you can’t easily change a student’s schedule. It’s dictated by a legal document called an Individualized Education Plan (IEP).

“There’s a process for changing IEPs, you can’t just change it,” Cantor said. “It has to be done at a meeting with the parents with parent’s permission.”

Rod Estvan, education policy analyst with the disability-rights group Access Living, said there’s a reason special education is expensive. Those IEPs outline, down to the minute, when students should be working with trained adults, like social workers, speech therapists, and certified teachers. The students may be deaf or dyslexic or have one of many conditions that make it harder for them to learn.

Federal law dictates students in special education must also be spending as much time as possible in regular classrooms. Creating schedules that fulfill both requirements can be a nightmare for principals.

“These are not easy choices that are being thrown down on principals to make,” Estvan said, noting that many principals do not have any background in special education.

“CPS will, over the course of the school year, be forced to reallocate additional staff to schools and open positions,” Estvan predicts. “Whether or not they can fill them or not is another question that late in the year.”

District spokeswoman Emily Bittner said the district is working closely with principals at these 102 schools on scheduling special needs students most efficiently. She said an 18-month review of special education found that the number of students with special needs in district-run schools declined 3.4 percent over the last five years, but staff serving them increased 13 percent.

Earlier this month, in announcing the cuts, then CEO Ruiz said the changes coming with All Means All would save $42.3 million.

Bittner said CPS would make sure schools have enough staff to work with special needs students and will absolutely meet all students’ IEP requirements, as outlined by law. She said the overall funding for special education is decreasing by five percent and still remains 14 percent of the district’s total budget.

But some still are worried that the shift in the formula could still give principals and staff mostly bad choices.

“I think that’s going to lead to a lot of pressure on principals and teachers to do the wrong thing in order to get services for their kids,” said Kristine Mayle, financial secretary for the Chicago Teachers Union and a former special education teacher. “We’re already hearing they’re trying to take kids out of self-contained classrooms and put them into regular ed classrooms. I fear that across the district, kids are going to be moved into placements that are not appropriate.”

The All Means All program also includes a financial bonus for schools who successfully transition students out of special education or move more kids into mainstream classrooms. Bittner said the intent is to better prepare special needs students for life beyond school, when the same services aren’t guaranteed.

CPS is in a financial crisis and it’s looking everywhere to cut costs. Nothing is off-limits. Not even special education.

But Cantor, the teacher at North-Grand, thinks that’s a big legal risk that could cost the district in the long run.