Submitted for your examination:

•  On my bookshelf, I have an original printing of Watchmen - dog-eared and worn.
•  On my iPad, I have the DC Comics app, the Marvel app, and the Comixology app
•  I've seen Avengers four times (so far)
•  When the Batmobile and Bat Pod came to Navy Pier, I was as excited as a sugared up four-year old on Christmas morning... 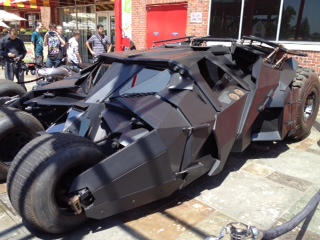 Yes.  I'm a bit of a comic book geek.  I learned to read by following the heroics of Batman, The Fantastic Four, The Amazing Spiderman, Iron Fist and Power Man, The Incredible Hulk, and The Uncanny X-Men.  I collected comic books until I was in high school and now read them on both of my Apple devices.  And the moment I saw Christopher Reeve as Superman in 1978, I believed that Hollywood could translate these iconic figures of my childhood to the silver screen.

And then there was the Richard Lester treatment of the Richard Donner Superman II.  In 1989, Tim Burton re-invented Batman and my hope was revived.  Then in 1995 there was Batman Forever and I was sickened.  Then Judge Dredd and my hopes dimmed.  Then Mystery Men and I was thrilled.  Back and forth between GOOD (X-Men, Hellboy) and EVIL (Daredevil, The League of Extraordinary Gentlemen) left every possible film adaptation up for grabs.

It made no sense.  These movies had already been written AND storyboards were available.  How could Hollywood not just knock it out of the park every single time?

I wanted Brett Ratner banned from the country when X-Men: Last Stand came out as he butchered the Dark Phoenix storyline but was conflicted by Matthew Vaughn's X-Men: First Class - he completely re-wrote the entire origin of the characters but it was a really good movie.

This Friday, my geek complex gets a bit of WBEZ Off-Air love as host Dan Weissmann talks with Tim Seeley, Mike Norton, Jenny Frison, and Sal Abbinanti about Hollywood's hit or miss record translating the heroes of the comics to the heroes of the screen.  Complete with film clips that exemplify the delimma, hopefully the event will shed some light on why Sin City was awesome and The Spirit was a mess.

Hope to see you there.