It was late afternoon at Richard J. Daley College in Chicago’s West Lawn neighborhood, and Ahmmad Khalil was scouring the halls looking for students. He found a small group in a study alcove and approached a young woman wearing headphones.

“My name is Ahmmad. I’m going around with a petition,” he told the woman. “Basically the petition is for a school name change.”

Khalil is president of the student government association at the City Colleges of Chicago campus and he’s leading a push to rename the school after a woman of color.

The top pick among students? Chicago’s own Michelle Obama.

“A lot of people there actually didn't feel represented by City Colleges,” Khalil said. “There was a lot of concerns over lack of female representation or different gendered representation.” 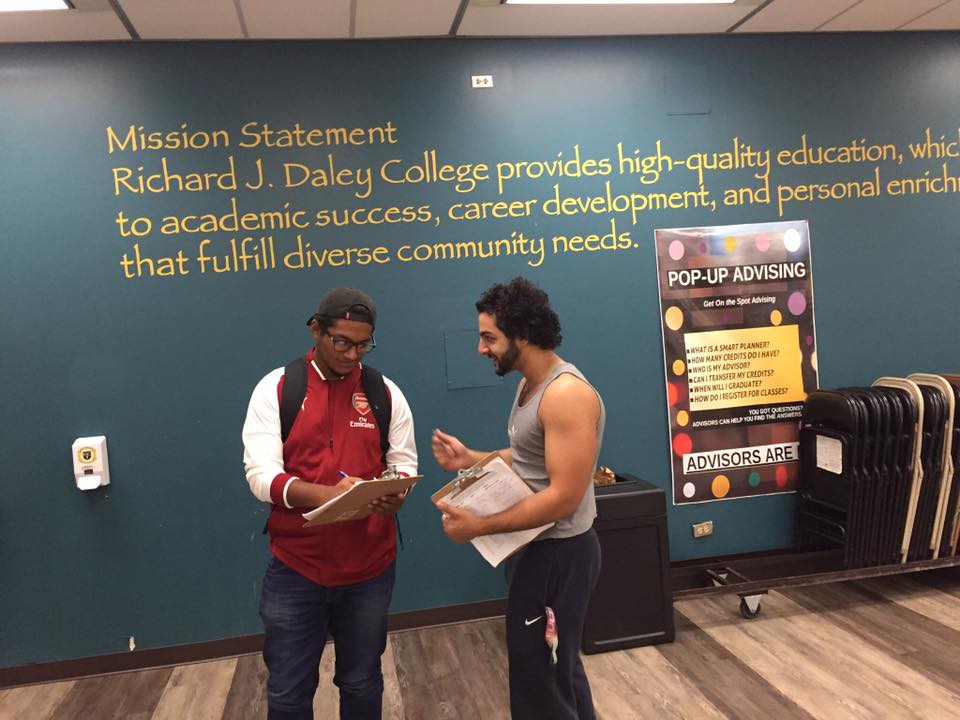 He conducted two informal surveys of students at Daley College to get a feel for his classmates’ views. A majority supported the name change, he said. When offered options for women of color to rename the school, about half chose Michelle Obama. The next two choices were Ellen Ochoa, the first Hispanic female astronaut, and Ida B Wells, journalist and early leader of the civil rights movement.

One student who signed the petition, Deazshy Perez, said she prefers Obama.

“She’s strong,” Perez said. “She came from a strong family. She’s always been about her education.”

Michelle Obama’s staff did not return a request for comment.

This school already has seen one name change. It was renamed Richard J. Daley College the week after the former mayor died in 1976. Before that, it was William J. Bogan Junior College.

Students don’t have a problem with the former mayor, Khalil said.

“They want to feel they belong in the City Colleges,” he said. And one way for students to feel they belong is to have their voices heard through a democratic process, not unlike the one that elected Mayor Daley. “What better platform to symbolize growth and development and to encourage the idea of civic engagement?”

Chancellor Juan Salgado met with the students in October. Khalil says he encouraged them to develop a plan for what they want to see happen over the next year.

But City Colleges did not respond to multiple requests for details on this issue, including how much it would cost and the process for a potential name change.

Khalil says he hopes they listen to students who are asking for a more inclusive system.

“We live in a stigmatized time [where] being gender fluid or just being a woman itself is looked at as being less than its counterpart, which is unfortunate because I like to think we’re out of those times,” he said. “But given our certain political state and climate … we are not past those times”

Students hope the City Colleges Board of Trustees will respond to their request at Thursday’s meeting.