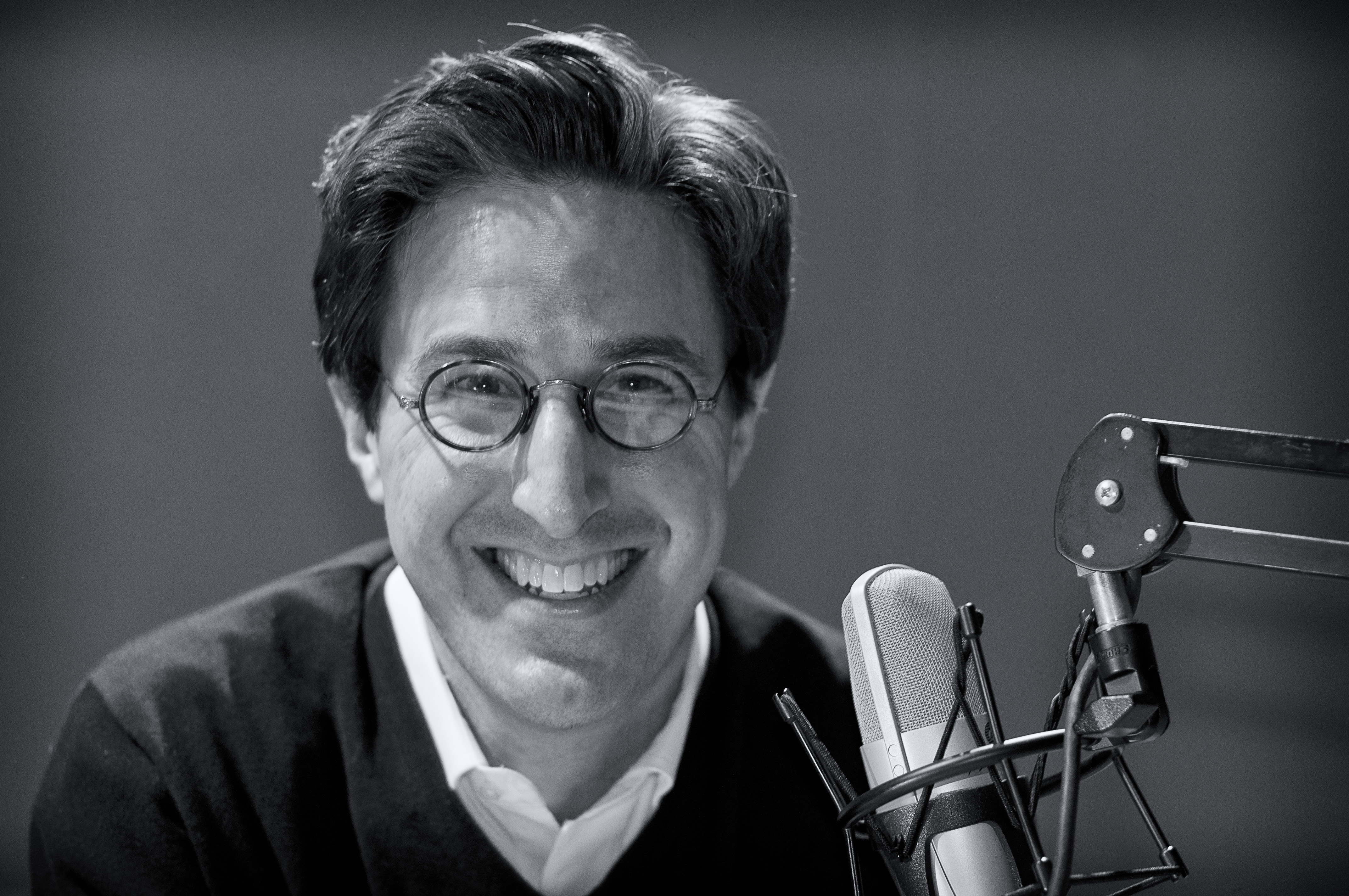 I was very sad to learn that today's interviewee would be leaving WBEZ. Steve Edwards was the first person to ever interview me at the station. His good nature and professionalism made me, and I'm sure many others, feel comfortable on-air. After over a dozen years with the station and a stint as the host of The Afternoon Shift, last week Edwards took his leave to work at the University of Chicago's new Institute of Politics.

Edwards’ reports and interviews have been honored by the Society of Professional Journalists, the Chicago Headline Club, the RTNDA, the Associated Press, UPI and Public Radio News Directors, Inc., and he earned a National Headliner Club's Grand Award for radio.

I got a little help from Steve's former colleagues, who will miss him, for some of the "deep cut" questions.

Your new job sounds very professional but a little confusing to the sleep-deprived. What will you be doing there, in layman’s terms?
Well, the University of Chicago’s Institute of Politics is modeled after a similar institute at Harvard, which was established in honor of President John F. Kennedy to “promote greater understanding and cooperation between the academic world and the worlds of politics and public affairs.” As Deputy Director, Programming, I’ll help create public programming across multiple platforms; opportunities for students to become engaged in politics and public service; and a program for visiting fellows – elected officials, journalists, policy-makers, and the like – to come to Chicago for an academic term to interact with students, faculty and the public around the important issues of our time.

As a listener and a guest I’ve always enjoyed how professional and prepared you are on-air. That said, can you describe a moment or two when you found yourself completely caught off-guard on-air?
There are too many to count, but the one that comes most immediately to mind happened on my very last episode of The Afternoon Shift. Usually, my colleague, Melba Lara, tosses back to me between the 2 p.m. and 3 p.m. hours by saying “Hour two of The Afternoon Shift is just ahead. Steve, what’s coming up?” And then I tell her.  At least that’s the idea. And the thing is, because we’re in separate studios, Melba and I can’t see each other. So, you have to trust that the other person is actually there – and paying attention – which I wasn’t on this day. I’d absent-mindedly stepped out of the studio to introduce myself to filmmaker Andy Wachowski before our upcoming interview, so when Melba asked me what’s coming up next…there was dead silence on-air. Our director/producer Jason Marck then jumped in to save the day, joking that I’d had enough and decided to quit on the spot. And I came racing back, out of breath, and blurted something incomprehensible.

What accomplishments are you proudest of as a journalist?
Most of all, I hope I’ve been able to share a few stories and conversations that have deepened our understanding of the world around us, and, as poet Sonia Sanchez put it so well during a recent interview, our understanding of what it means to be human. Then again, a longtime colleague did tell me recently that she thought the single best moment in my career was the WBEZ pledge drive video where I jumped in the lake, fully clothed.

What tips do you have for other hosts and journalists on how to quickly prepare for an interview?
Ask short, focused questions. And listen relentlessly.

As a journalist, what do you like best about Chicago politics?
The fact that it closely resembles a dastardly family melodrama.

As a resident, what do you like least about it?
The fact that it too often serves self-interests rather than the public interest.

Aside from NPR, what radio stations/podcasts do you most enjoy listening to?
I’m an omnivore when it comes to audio. I listen to all the AM talk stations, sports radio, WFMT, WDCB, XRT, B96 and V103. I’m a huge fan of the shows Tonic and The Signal on CBC Radio 2 and podcasts like WTF and Love & Radio, among others. I also love late night college radio, where you can often find some great extended DJ sets.

What do you listen to with your kids in the car?
Most of the above – plus lots of our own music. I’m not big on the “kids music” thing, per se. I think great music is great music, regardless of genre or life stage.

Speaking of your kids, we had fun chatting about American Idol this summer, which we both watched. What else do you watch with your kids?
Well, I have younger kids, so Idol was in a class by itself in terms of family watching, though followed closely at times by The Voice and So You Think You Can Dance? (I do, but I can’t). My kids are also waaaaayyy into PBS, not just PBS kids, but real PBS – you know, like, America’s Test Kitchen and Chicago Tonight. In fact, he’ll hate that I’m telling you this, but my son, William, used to stand in front of a mirror at the age of 3 pretending he was Phil Ponce. I’ve since tried to introduce him to the Real Housewives franchise as well, but without success.

I’ve been asked by NPR listeners whether you look like your voice (I said yes). Have you received any weird comments over the years from listeners who met you in real life who commented on the face/voice correlation?
Thankfully, no. I think they save those for behind my back.

What was your favorite pledge drive giveaway?
Hmmm. That’s a good one. That Tivoli radio really is amazing, though it’s a bit pricey for some. And I’m always a sucker for the magazine combos. Oh – and that free Chipotle burrito coupon they used to give out on certain days? That rocked.

What celebrity gossip magazines do you read? If one were to set up a celebrity gossip fantasy league, how would that work?
Ha! You’ve done your research, Zulkey. Nice. US Weekly, of course, is the gold standard. And as a former player in such a league, I can safely say that I definitely don’t read it enough. We "drafted" celebs and received points based on where and how often the members of your "team" appeared in the magazine. My wife, Andrea, and I played for one year and got spanked. It wasn’t even funny. People were trading for celebrities we hadn’t even heard of. To give you an idea of how outclassed we were, I gambled big that 2007 was going to be Whitney Houston’s comeback year.

Tell me about the time you got into a fight on a party boat whilst in college. Did you win?
Damn, you’re good! Who is your source on this stuff? Short answer: No. Long answer, I escaped by a TKO. The story is too long to recount here, but for the record, I simply stepped in – quite chivalrously, I might add – to defend a good friend of mine who was being harassed repeatedly by a group of drunken party-goers. And  you know what I learned? I learned never to do that again. I also learned that one should never wear loafers on a boat deck in the rain when 300 lb. men are trying to beat you up.

How does it feel to be the 328th person interviewed for Zulkey.com/WBEZ?
Vivifying.