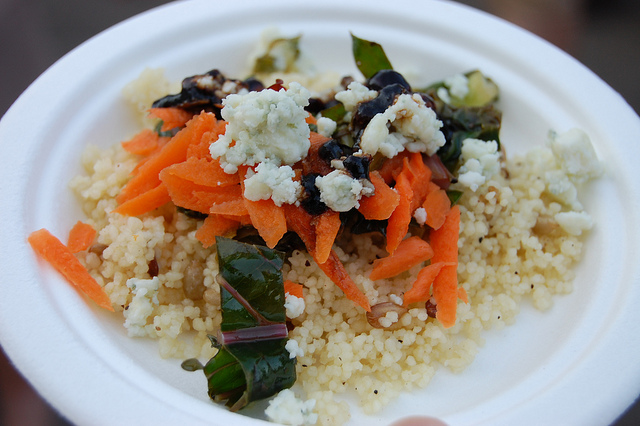 Miss this year's Green City Market Locavore Challenge? Yeah, me too. But it's not over yet at the Locavore Seasonal Potluck Celebration featuring Terra Brockman at the Jane Addams Hull-House Museum. Brockman is the author of The Seasons on Henry's Farm: A Year of Food and Life on a Sustainable Farm, based on her brother's vegetable farm in central Illinois. She's also the founder of The Land Connection, an educational nonprofit working to ensure that more Illinois farmland will grow local foods for our tables. And if you've never been to the historic Hull-House for an event, it's a treat in and of itself. Admission FREE but RSVP and dish required.

And speaking of the Hull-House, Re-Thinking soup is back! This week's Topic of the Day centers around a screening of the award-winning documentary film Cooking History telling the stories of army cooks and their battlefield food through six wars, 11 recipes, and 60,361,024 dead. As always, lunch will be served: a seasonal soup made with produce from the Hull-House Museum Heirloom Farm and bread from Nicole's Divine Crackers. Admission FREE.

It's the second to last Veggie Bingo of the season at The Hideout hosted by the one and only Martha Bayne! As you should know by now, Veggie Bingo is much more that just bingo for veggies, it's a fundraiser for community gardens co-sponsored by NeighborSpace that's raised thousands of dollars to date, this week benefitting Riverbank Neighbors, at Berteau and the Chicago River. But yes, there is a sweet grand prize of fresh produce from Irv & Shelly's Fresh Picks and other prizes from local artisanal food producers, farmers, and gardeners — plus free hot dogs donated by Hot Doug's grilled out front. Admission FREE, $2 for each bingo card or $5 for three.

Eat and drink from Bottles & Jars at Bar Toma benefitting the Greater Chicago Food Depository — plus learn how to make the house giardiniera, as well as the Capriole goat cheese and treviso marmalade, then jar them to take home. The event is hosted by chef/partner Tony Mantuano, his wife and wine expert/author Cathy Mantuano, and restaurant publicist Amanda Puck. Admission $40.