The ebb and flow of summer in the Chicago is predictable, as are at least a few of the questions raised between Memorial and Labor Days. That being said, the answers can still surprise you. Below we list a few of the summer-related queries posed to us. None is all that long, so you can take all of them in and still have plenty of time to hit the beach or catch some rays.

First up: Regan Burke from Chicago's Gold Coast, asked: How do firemen keep cool in those fire outfits in 100-degree weather?

We talked to Larry Langford of the Chicago Fire Department, and he gave us the honest truth: “They don’t keep cool. You can’t keep cool in [the outfit]. The outfit is very hot - it’s called bunker gear - and it’s supposed to isolate you from the dangers of the fire but in doing so, it is very warm inside. What [the firefighters] do is not work as hard as long, because the body will overheat. So in a fire situation we have to bring them out and cycle them through more often,” Langford said. 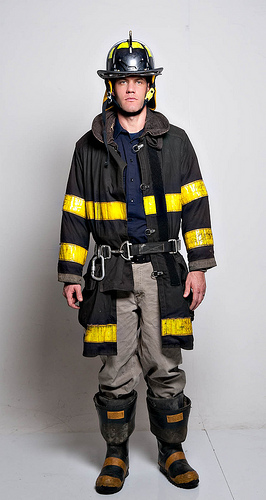 So on really hot days, the fire department will actually elevate the alarm of the fire - a first-alarm fire becomes a second-alarm fire just to get more manpower and resources on the scene so firefighters can cycle through more rapidly. Langford said this technique has been working really well along with keeping firefighters hydrated at all times--not just when they’re in the middle of a blaze.

“The hard part is getting them to come out, because Chicago firefighters want to go in there and do the work,” Langford added. “The thing is our medical people understand sometimes, this [heatstroke] can sneak up on you and you can’t really feel it. So sometimes you just have to order them [firefighters] out, check their vitals, and they’re amazed to see how elevated their vitals are. And they’re glad, in the end, that we brought them out.”

Langford says rotating firefighters like this doesn’t lengthen the time it takes to fight fires. To hear more from Langford, listen to our full interview.

Next is a question from Cherelyn Riesmeyer, from Lincoln Park, who asked: Why is surfing not allowed in Lake Michigan?

Turns out, surfing is allowed in Lake Michigan, but it wasn’t always, and it’s not everywhere. In 2009, the board of the Chicago Park District lifted the total ban on surfing and all “self-propelled, wave-riding board sports,” which included body surfing, boogie boarding, stand-up paddling and skim boarding, after a bunch of local surfers and activists took a stand against the restrictions.

After a number of negotiations, the surfers, the city of Chicago and the Park District reached a temporary agreement: In-season (Memorial Day to Labor Day) surfing is permitted at Montrose and 57th Street beaches. During the off-season (Labor Day to Memorial Day), surfing permission expands to Osterman and Rainbow beaches, too. 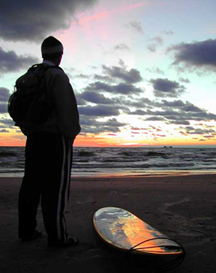 It may seem like a small list, but for surfers, those were the only beaches “worth fighting for.” When we spoke to Mitch McNeil, vice president of Chicago’s Surfrider Foundation chapter, he told us the designated surfing beaches were picked because they have the best waves (which can get up to 30 feet high!).

“Each beach has its own kind of wave,” McNeil said. “Each wave is created by the way the bottom is shaped and how the shoreline is lined up according to the wind. So, we had our hit list.”

Also, it’s no bummer there are more beaches to choose from in the winter.

“That’s actually when the best waves happen,” McNeil said. “You get your best waves in the fall and definitely in the winter.”

But when one Chicago surfer, Rex Flodstrom, took advantage of those waves on an unauthorized beach last January, he was arrested and sentenced to community service. As a result, the newly-formed Chicago Surfrider Foundation began another round of negotiations with  the city of Chicago and the Park District to expand surfing permissions along the coast.

For specifics on Chicago’s surfing and flotation device regulations, you can also read this 2009 memo from the Park District.

But some folks may want to wear a wetsuit in the lake even if they’re not surfing.

Our next question comes from Kari Carlson of Rogers Park, who asked: “How did Chicagoans survive extreme heat before AC units were common?”

“We suffered,” laughed Evelyn Klauber, a resident at The Hallmark, a senior living center on Lake Shore Drive.

We joined Evelyn and other residents for breakfast at The Hallmark last week in search of answers. Most people we talked to laughed, remembering the days of ice vendors, beach nights, and the novelty of electric fans in the 1930s. Some people remembered temperatures over 100 degrees -- a number we can relate to as this record-breaking summer comes to an end.

Yet, as the comfort and convenience of flicking on the AC replaces having to call over the iceman, the older generation seemed to spend their summers together. When it’s hot, we go inside and turn on the AC or fan. Back then, people went outside. In fact, they slept there. 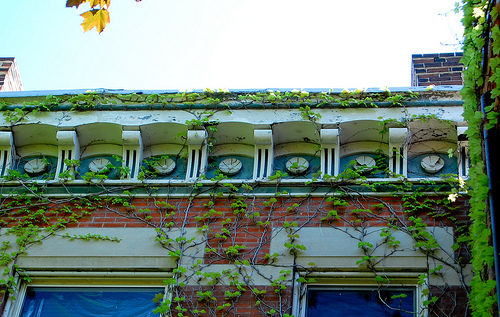 Before air conditioning was commercialized, many Chicagoans found themselves heading to city beaches or parks for the night, the outside breeze providing a cooler sleep than the hot stillness indoors.

“Nobody was worried about muggers in those days,” said James Alter, 90, who actually jumped into the air-conditioning business as soon as it became popular. “Families would take blankets down and lay in the sand. That was fun!”

Bobbie Katman, 74, remembers her father installing a huge exhaust fan in the first-floor living room. The fan would suck up the hot air from the second floor and channel it through the downstairs windows.

One reader said she even remembered her mother telling her she slept out on the fire escape.

Architecturally, buildings and homes were built a little differently, too. Jack Spicer, vice president of Preservation Chicago, told us nearly all skyscrapers had rows and rows of awnings on the west and south sides--where most of the sun was absorbed. Another addition were cornices, which are big, horizontal moldings across the tops of homes and buildings, that often helped keep the indoor temperature cool.

The Auditorium Theatre had its own way of keeping cool in the 1930s, too. Sam Guard, who studies Chicago historic architecture, told us the theater dedicated an entire room in its basement to store massive amounts of ice.

The insulation? Saw dust. Two feet of it between the walls. A ventilation system drew that cold air into the theater. You can still see that system on either side of the stage today.

So, there were ways Chicagoans dealt with the heat in the days before air conditioning.

Clay from Lincoln Park asked us: Why do we have temporary bacteria warnings that prevent us from swimming in Lake Michigan?

The short answer is that the U.S. Environmental Protection Agency doesn’t want you to get sick and die.

After that, it gets a bit more complex.

The EPA requires that public beach water be tested for E. coli levels at least once a week. Lake Michigan water is tested at least five times a week, according to the Chicago Park District. Park District officials emphasized that the type of E. coli tested is not itself harmful but is used as an indicator bacteria for other potentially harmful germs or viruses, but E. coli can become harmful at higher levels. And if those E. coli samples reach above 235 colony forming units (CFU), then officials will issue an advisory letting people know that it’s unsafe to swim. 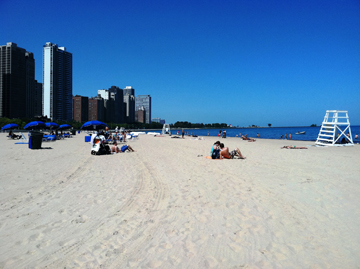 That simply means an advisory at one beach may not be an issue at another. Which is why the Park District is encouraging Chicagoans to check for swim warnings before they hit the sands. They said swim warnings and restrictions at one beach may not even exist at other beaches. The district also said city policy has shifted to provide those warnings on its website, via a call-in phone hotline, text message, or social media in real-time. Before that, they could only test and provide swim advisories up to one day in advance. And they used to close beaches.

The Park District says the warnings are cautionary, not outright bans. So the decision to get in the water is up to each individual swimmer - the Park District will typically only ban people from swimming in water, due to bacteria, in the event of a sewage spill or leak.

But the Natural Resources Defense Council said stormwater runoff, wildlife poop, sewage spills and leaks and other contaminants pollute Illinois beachwater. And that can make swimmers sick. An NRDC report released earlier this year ranked Illinois 28th out of 30 states for beachwater quality - 30 being the most polluted. That report noted that beachwater pollution can lead to illnesses such as stomach flu, skin rashes, pink eye, and ear, nose and throat problems. It can even be fatal to those with weak immune systems. 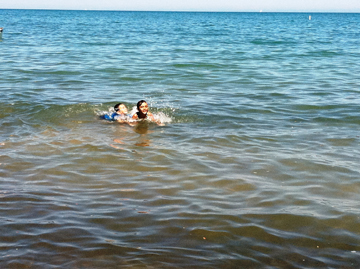 Henry Henderson directs the NRDC’s Midwest program. He said it’s commendable that the city’s Park District provides real-time contamination results, but that it should continue to view beachwater pollution as a very serious matter.

“I think the critical thing is explaining what these things mean to people because they don’t see it,” Henderson said. “They may not think it’s a real problem.”

Chicago’s Oak Street Beach was under a swim advisory on Monday and most swimmers had no idea. Most of them didn’t notice the yellow flag. No wonder, because it was near a bike path--not on the beach itself. They also seemed a bit frustrated. They said lifeguards weren’t communicating the bacteria warnings to swimmers. But ultimately they said that is probably because most Chicagoans realize that Illinois beach water is, well, dirty.

But can it become cleaner?

Chicago Park District officials said they’ve seen improvements in bacteria levels as they learn more about where it comes from.

“I don’t think you’ll ever see zero because what we’re measuring is something that occurs naturally in the environment,” said Cathy Breitenbach, the district’s director of lakefront operations, “So as long as we have wildlife there will be some bacteria because it’s an ecosystem.”

Chicagoans can deal with anything, so it seems: fighting fires to fighting surfing regulations; beach bacteria to beach sleepovers. And that’s just in the summer.