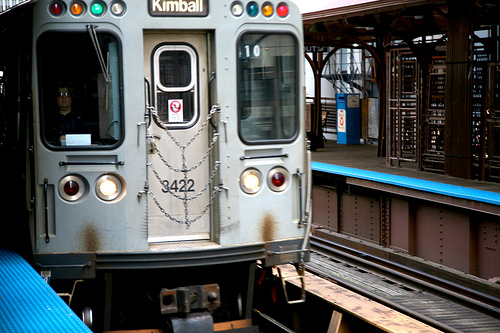 'THIS IS NO MORE THAN A DOG AND PONY SHOW.' That's one CTA rider's protest, as quoted in the Tribune, at last night's hearing on a new fare payment system set to take effect this summer, if the CTA board OKs it in a vote Wednesday.
-- DNAinfo.com Chicago: Chicago considers using red-light cams to spot parking violators.

GOOD AND WET. Yes, Chicago's winter has become wetter than usual. Yes, that's good news for farmers. No, it's not good for people who live near rivers, as the Sun-Times explains.

HISTORIC DECISION. In what could be a break for Senate Democrats, Dick Durbin's decided to run for another term, which could make him the first Illinois Democrat to win four terms.
* "Ward Room" blog: "Durbin is so popular he’ll win even if he’s caught robbing Lincoln’s Tomb."

Get this blog by email, free. Sign up here.

VATICAM. Watch live video from the Vatican for a sign the new pope has been chosen.
* Eric Zorn: "Who might be the next Pope? I don't care!"

'MY 9-YEAR-OLD SAID: "WHERE, BACK TO THE SLAMMER?"' Ex-Cub Mark Grace says that, when he has to leave early to return to his work-release sentence at an Arizona jail, his son gets it.

ARE YOU WHAT YOU LIKE? A new report in the Proceedings of the National Academy of Sciences concludes your Facebook "likes" reveal a lot about your personality.
* Simpler test on Web diagnoses personality with a single click. (Approach with caution: It found this blogger "shy and reserved." Also -- snicker if you will -- "well organized.")

ANNOUNCEMENTS.
* Suggestions for this blog? Email anytime.
* Follow us on Twitter: @WBEZ and @Meyerson.
* Looking for the most recent WBEZ Meyerson News Quiz? Here you go.