Chicago Public Schools is planning to take on more than 100 construction projects in the next year. On that lengthy list is a curious project: “New Southside High School Construction.”

The cost? $75 million. The location? To be determined.

But several sources familiar with the district’s capital planning confirmed to WBEZ that officials want the school in Englewood and are considering consolidating several existing neighborhood high schools due to low enrollment.

The possible Englewood high school is one of 16 unnamed projects on the recently updated and approved capital budget. When asked for details, CPS spokeswoman Emily Bittner declined to offer more information about the potential new school.

“For several of the building projects in the supplemental capital agenda, we will continue to listen to the community’s feedback before moving forward or making specific recommendations about project details,” Bittner said in a statement.

Bittner has said the internal list was only preliminary and the final number of projects is dependent on financing. On Friday, CPS sold $729 million in bonds to finance capital improvements.

Englewood is under consideration for a new high school even though it has some of the most under-enrolled high schools in the city. When a five-year moratorium on school closings ends in 2018, the neighborhood could face school consolidations and closures.

Four high schools in Englewood have among the smallest freshmen classes in the city. At TEAM Englewood, 15 freshmen were enrolled when CPS took it’s official count in October. At Robeson and Harper, there were 23 and 36, respectively. At Hope College Prep, the school formerly led by Board of Education member Mahalia Hines, just 28 freshman showed up.

Collectively, these four public high schools have just 614 students. It’s a stark drop from 2010, when more than 2,500 students attended these schools.

“These schools are hanging by a thread,” said Sarah Rothschild Hainds, a researcher with the Chicago Teachers Union and a member of the state task force that oversees the district’s facility planning process. “They barely can offer programming. They have such tiny budgets. They have such tiny enrollment.”

Englewood is not alone. After spending more than a decade expanding the number of public school choices in the city while the city’s student population was declining, Chicago now has more than two dozen high schools with fewer than 100 freshmen. WBEZ first reported on withering enrollment in neighborhood high schools in 2013 and again in 2015. 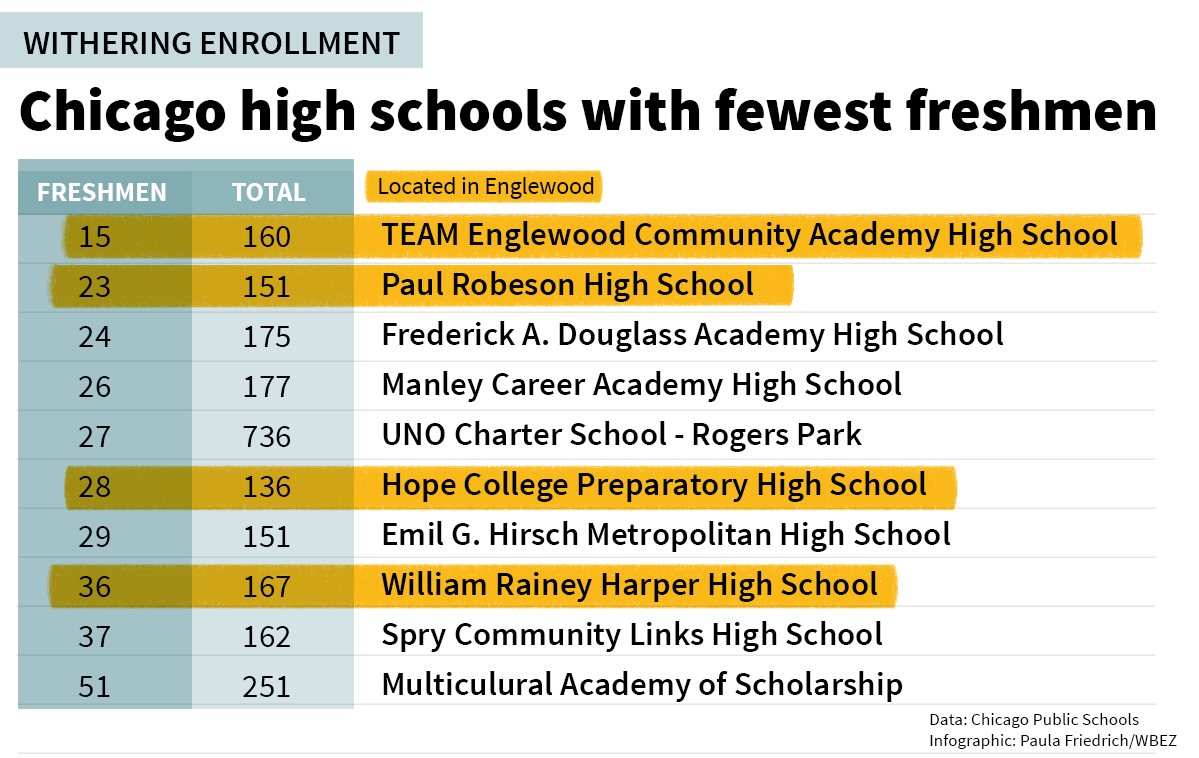 But closing severely under-enrolled schools is not easy. Sources who spoke on a condition of anonymity said officials do not want to close schools without making some kind of new investment because they are keenly aware that people have deep connections to schools as community institutions. In Englewood’s case, the trade-off would be a new high-school building. In 2013, when CPS closed 50 schools in a single year, they spent millions fixing up designated receiving schools.

Rothschild Hainds said the district needs to be more transparent about the possible new school construction plans, noting there could be more support if people were included in the decision making.

There once was an Englewood High School, but the district decided to close it in 2005 for poor performance. The last class graduated in 2008, and now the building is shared between TEAM Englewood and a public charter school called Urban Prep Academy. 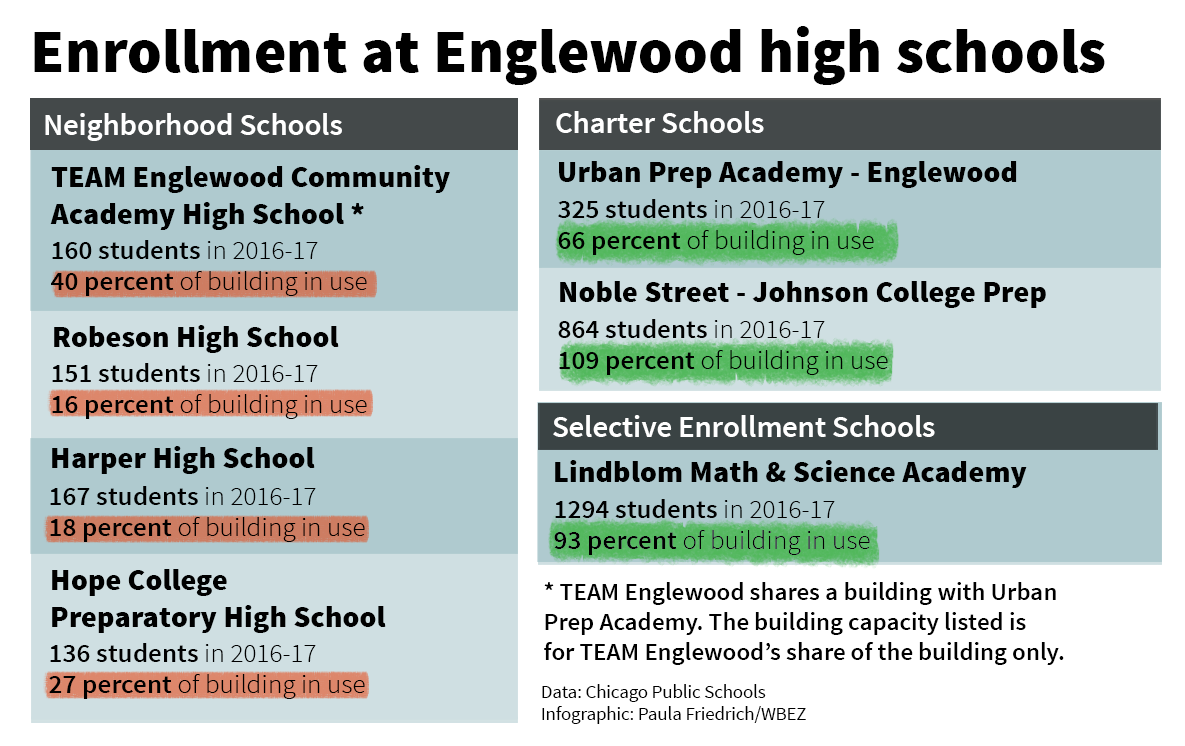 “We’re not just -- and I’m using air quotes here -- competing for students with schools within our community, but we’re really competing across the city,” said Tim King, the founder and president of Urban Prep, which also has campuses in Bronzeville and on the Near West Side.

King said schools in neighborhoods with high poverty and violence are at a disadvantage because of their location.

“We still, to this day, get parents who will not apply to Urban Prep-West, simply because they think, ‘Oh West, West Side equals bad. I don’t want my child to go to school on the West Side of the city,’” he said.

There are a lot of unanswered questions about a possible new Englewood high school. What programs might be offered to attract students? Who will go to the new school? Is the idea to have one strong neighborhood school instead of many under-enrolled ones?

There is also the possibility that district officials could change their mind. At a recent hearing on the capital budget, several leaders in Chinatown advocated for a high school in their neighborhood. But sources said Englewood is still a frontrunner.

Whatever the thinking, the district should reach out to the communities under consideration now.  Said Beatriz Ponce de León, executive director of the Generation All Initiative, a group focused on bringing back neighborhood high schools as community anchors.

“These moments with this kind of decision, these are good opportunities to do that and make it publicly known that you are working with the people who are going to be impacted to make some of these decisions together,” Ponce de León said.

It’s not clear if the district is reaching out to anyone in Englewood or other communities. Calls to several schools were unanswered or referred to the district’s communications office.

Becky Vevea is an education reporter for WBEZ. You can follow her at @WBEZeducation.