Editor's note: This piece was produced in partnership with the Chicago Architecture Foundation, which provided research, expertise and other assistance during its development.

Curious Citizen Tom Koehl grew up in Western Springs and Chicago, but he spent a few years living in New York. That’s where he first got into the habit of spotting mysterious buildings like the thirty-two story, mostly windowless one at 375 Pearl Street in Manhattan. The building is familiar to most New Yorkers because of the way it looms into sight from the Brooklyn Bridge.

So when he moved back to the Chicago area in 2006, he was primed to spot windowless buildings everywhere. And that’s why he asked Curious City this question:

There are a handful of buildings in the Loop that have no doors and no windows. They’re very mysterious and I’m wondering what’s inside?

Tom wrote to Curious City with three specific buildings in mind, and while each looks different, he suspects they have something in common. His best guess is they contain some kind of utility or machinery, like telephone or electrical systems. Tom’s hunch is correct.

And his question speaks to the dilemma that architects face when they have to design these structures called “infrastructure buildings” or “utility buildings.” Utility buildings need to be near the clients they serve, whether that’s downtown or in a neighborhood. Chicago’s Loop has retail, offices, hotels, theaters, tourist attractions; places that are supposed to attract visitors and be aesthetically pleasing. Building owners and occupants typically don’t necessarily want to see, hear, or smell pipes, compressors, wires, or heavy machinery right next to their attractive buildings. So the architects charged with designing infrastructure buildings have a real challenge: How do they house the potentially unsightly nitty gritty, without interfering with the neighbors’ needs? To put it another way, how do you fit infrastructure into a city that values beauty?

Architects have faced this problem for a long time and experimented with many different ways to address this design challenge. It turns out each of Tom’s buildings represent a different solution, all from different eras. The solutions range from dressing the infrastructure up in the glamorous architecture of the time to making it non-descript and unnoteworthy. 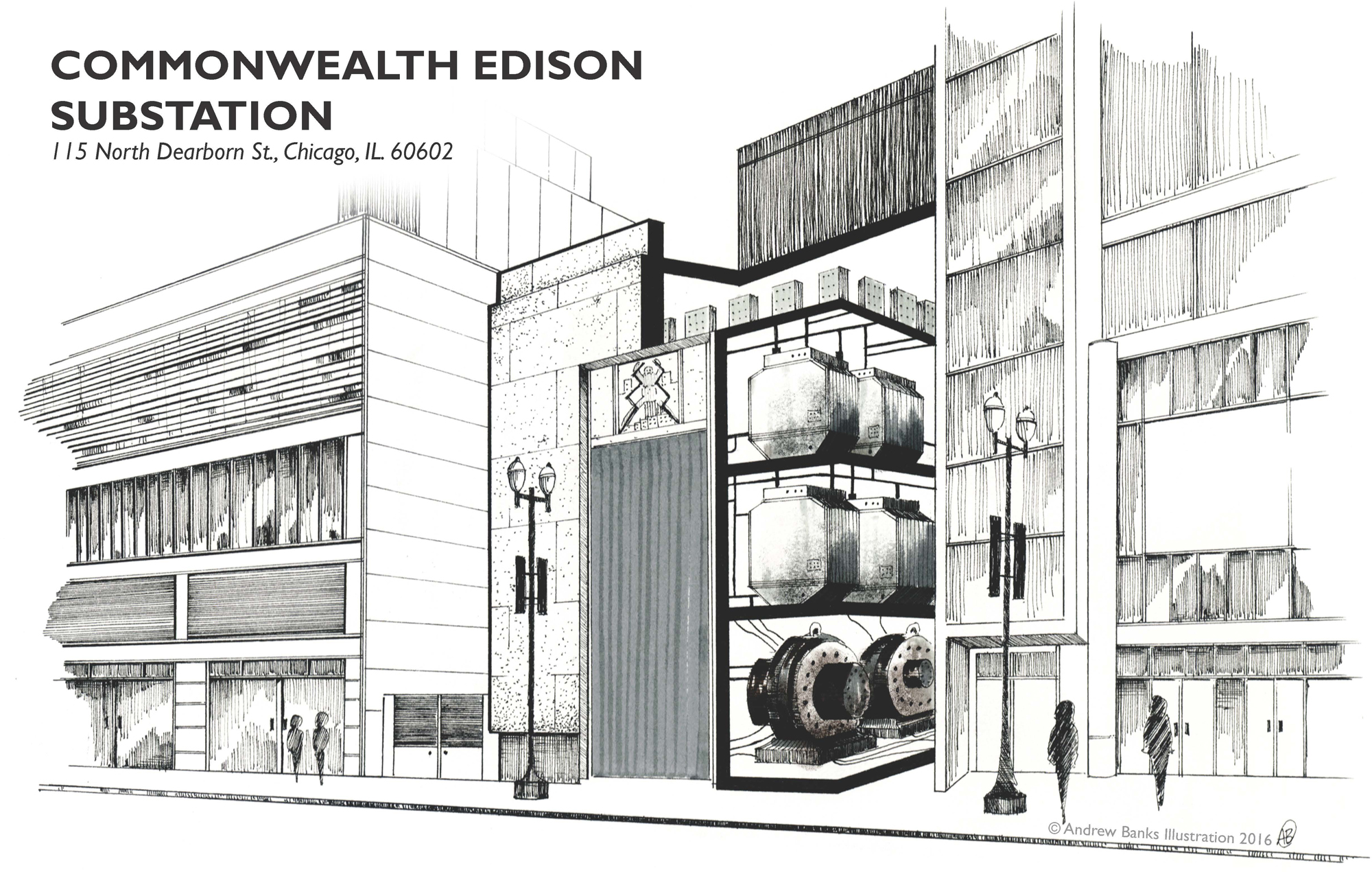 Architects' strategy: Hide the infrastructure in a beautiful, ornate disguise

This tiny, cream-colored limestone and black granite building may seem out of place amidst the larger steel, glass, and concrete buildings of Block 37, just across Dearborn Street from the Daley Center. Commonwealth Edison, which owns the building,  will not formally comment on what’s inside, but several documents from the 1930s, as well as more recent articles, reveal the building houses a power substation. It takes high voltage electricity from power plants (or other substations) and lowers the voltage to a level that can be used by nearby buildings. You find substations wherever people use electricity, and sometimes, the transformers, voltage regulators, circuit breakers and other equipment that make up a substation are simply exposed out in the open for anybody to see.

In 1931, ComEd decided they wanted to take a different approach.Their new substation was located in the fancy theater district at Dearborn and Adams. So ComEd chose to “dress up” their infrastructure. They commissioned the architectural firm of Holabird and Root, known for designing the iconic Art Deco Board of Trade and Palmolive buildings during the late 1920s. Holabird and Root’s design hides the gritty equipment in an elegant shell, but includes a bas-relief depiction of a demigod like figure, holding lightning bolts as a way of both hinting at and celebrating the vitality of the production and transmission of electricity to the city. The building may seem out of place now, but at the time it fit right in. In 1930, the Journal of Commerce reviewed ComEd’s new building glowingly, noting “It is the policy of the Commonwealth Edison Company to erect its many buildings to conform to the appearance of their environs. In fact, in many cases these structures with their carefully landscaped surroundings are beauty spots of the communities in which they are situated.” 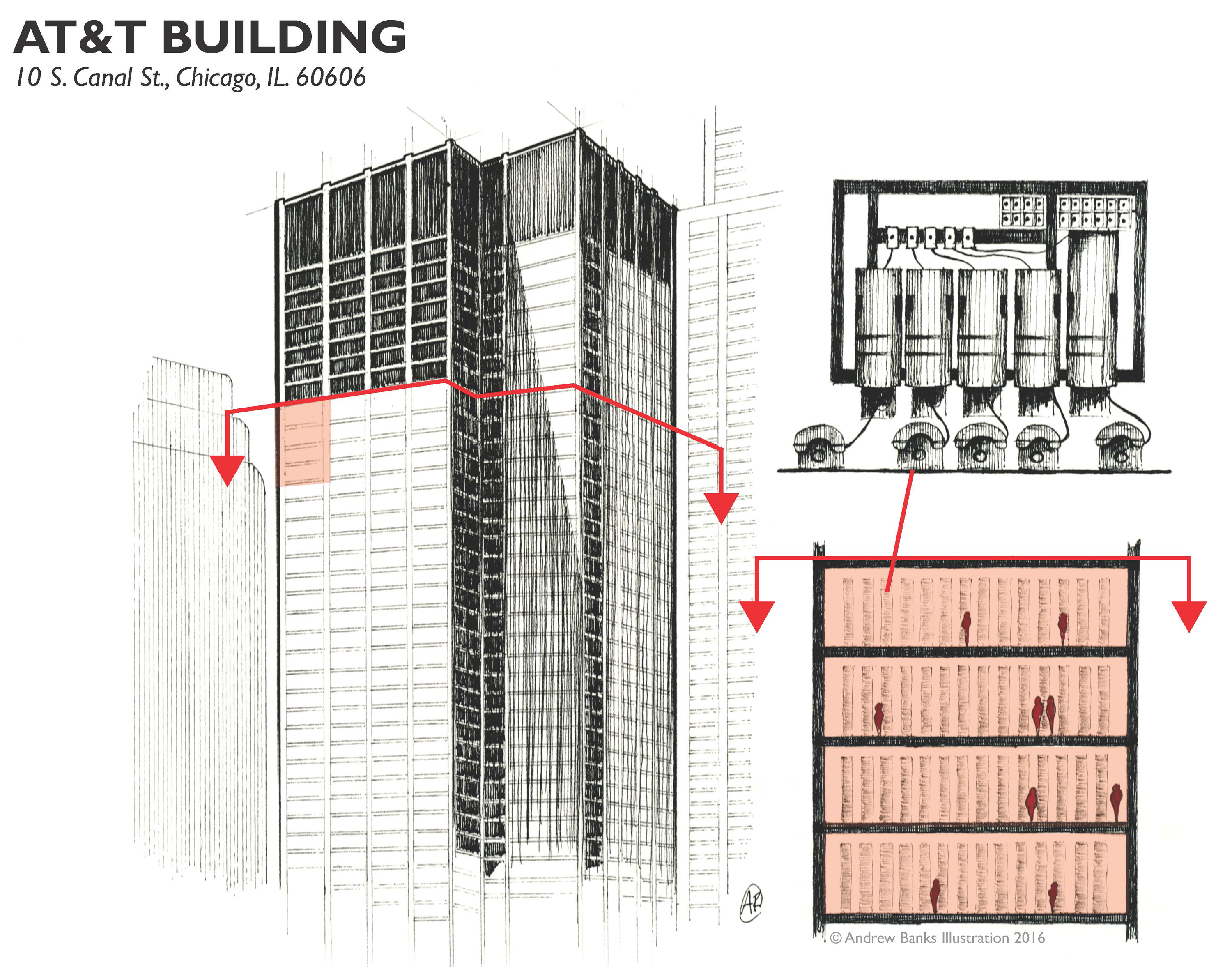 As questioner Tom Koehl notices, the 23-story cream-colored concrete AT&T Building has some features that help it hide in plain sight. His eyes tend to easily slide across it, settling on the nearby City Group Center or Daily News Building instead. While the building has doors at the bottom and seven floors of windows at the top, all 18 floors in the middle are windowless. In between a grid of vertical columns and horizontal beams, a textured grooved concrete pattern fills in the spaces where you’d typically find windows.

Built in 1970 by the telephone utility Illinois Bell, the building’s location at 10 S. Canal Street was very different from the trendy West Loop we see today. Fifty years ago, the building sat at what was the edge of downtown, bordered by warehouses and railyards. Its height allows it to house 18 floors of telephone equipment and still maintain seven floors of offices at the top.

While current owners AT&T will not confirm what’s inside, presumably for security reasons, Curious City was able to speak to Nick Bilandic, the younger brother of former Mayor Michael Bilandic. As the original structural engineer from Holabird and Root, Bilandic has fond memories of working on this building. He explains the windowless floors house telephone switching equipment, which is essential for connecting phone calls. Bilandic heard through the engineering grapevine that the equipment has been upgraded to a new generation, but the building still has the same essential function.

Bilandic says that in the late 1960s, when the building was designed, “the mood of the country was such that everybody was worried about nuclear attacks. This building won’t survive a direct hit, but if the  bomb were dropped a  short distance away, and radiation occurred, the building walls would protect the equipment and the people inside.” Illinois Bell considered its telephone services an essential part of emergency preparedness, and wanted to be able to keep the phone lines working in the event of nuclear war, he says.

The building originally had a million-gallon oil tank, turbine generators, and a water well, so Illinois Bell could continue to operate for two weeks or longer without electricity or water from the city. Unlike many tall buildings in Chicago, the foundation is anchored in bedrock, which helps support the weight of the equipment inside, and gives it extra resistance to bomb blasts or earthquakes.

At first glance, it may not seem that the architects were not too concerned with beauty.  But the building’s aesthetics reflect its purpose: the concrete is strong and very resistant to nuclear radiation.  The architects didn’t want the building to attract too much attention so while the majority of the building lacks windows, the architects chose to disguise this with rough-grooved concrete texture. As Curious Citizen Tom Koehl observes: “If that didn’t have that, it would just be like this concrete monolith which would really stand out. I think it feels like it’s intentionally being anonymous.” 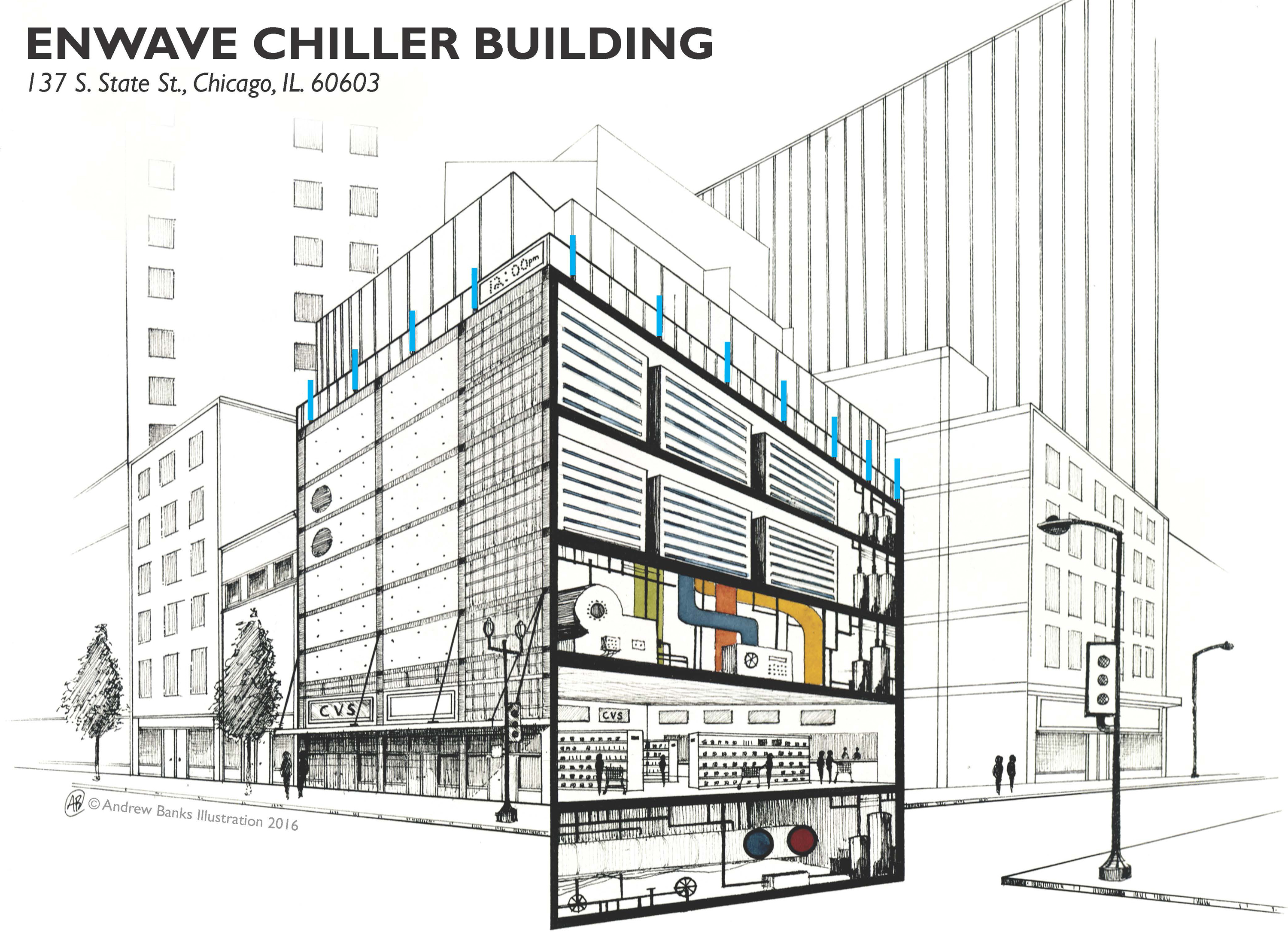 Architects' strategy: Blend in with the street but inspire curiosity about what's inside

At the corner of State and Adams, a CVS pharmacy sits below four nearly-windowless floors of concrete. Millions of pedestrians who walk past the building or visit the CVS may never look up to notice this unusual building. Round industrial vents and a few glass block windows create a sense that something industrial is happening inside.

The building is currently owned by Enwave and Curious City got a chance to take a tour inside with Jim Rylowicz, Enwave’s Manager of Business Development, and Bill Dolan, the Operations Manager.  Directly above the CVS lies an ice water “factory” on four vertically stacked floors. Two floors contain nothing but floor to ceiling ice and water tanks. Another story houses pumps and compressors and a series of color coded pipes with coolant, condenser water, chilled water, and water to be chilled. On the roof, massive fans and cooling towers - mechanical equipment to remove heat - are hidden from street view.

Enwave uses the compressors to make ice at night, when electrical rates are cheap (and power sources tend to be wind and nuclear). During the day, the ice melts to make very cold water, which it pumps around the loop. Client buildings have heat exchangers that allow them to cool their buildings by “giving” their heat back to Enwave.

Some of their clients are older buildings, built before air conditioning was widespread. Others are newer buildings that choose to let Enwave save them the hassle of buying and maintaining their own air conditioning systems. Rylowicz says he would prefer it if people could see what Enwave is doing. He’s proud of their operation, because he says it has environmental and cost benefits. However, the building’s opaque walls hide what Enwave is up to.

Architect Walt Eckenhoff from the firm Eckenhoff Saunders explains the original design included transparent glass walls, which would allow passersby to see the brightly colored pipes and compressors of the plant. However, State Street is a retail district and “the merchants didn’t want an industrial building on their retail street. So we sheathed the building in an opaque material, glass block and pre-cast concrete. And created a little mystery so it’s difficult to find out what happens inside,” he says.

The building features obvious round vents, as well as a ring of lights around the roof that glow blue at night to suggest that the building is engaged in making ice. These hints are an architectural compromise between hiding infrastructure, and making it visible through transparency.

Our relationship with our infrastructure evolves 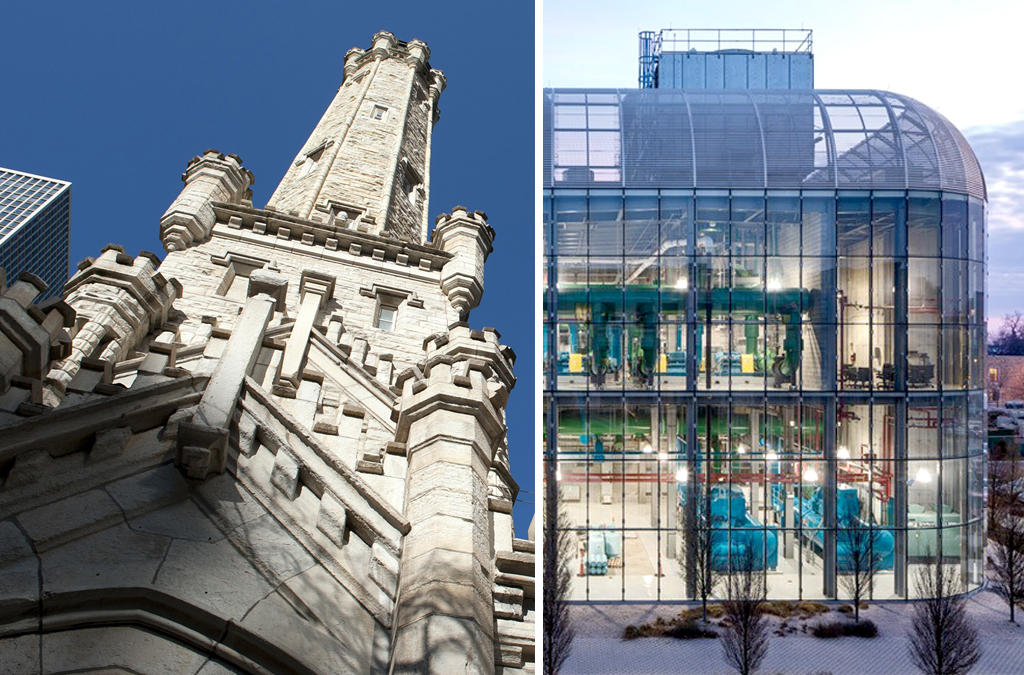 Chicago architects have wrestled with the infrastructure dilemma for more than a century. And their design strategies have changed over time as our own relationship with our city’s infrastructure has shifted. Take the Chicago Water Tower located at Michigan and Chicago avenues. The structure’s only purpose is to hold up a 63 foot tall standpipe, a component of the nearby pumping station. But in the late 1860s, architect W.W. Boyington chose to hide this simple pipe inside a castellated Gothic tower, reminiscent of a chess piece.

Boyington’s choice of such a decorative “cloak” for this functional utility building signals how much the public valued its new infrastructure. It drew attention to the building but at the same time, covered up what was inside because the public didn’t want to see a bare pipe out in the open.

A lot has changed since the 1860s, and even since the 1990s. Designers and clients are recognizing that infrastructure can be beautiful and by making the building more transparent, the public also has a better understanding of how the utility system works. One of the most recent dramatic examples of this can be found at the University of Chicago. The South Campus Chiller Plant, completed in 2010 and designed by architect Helmut Jahn, works like the Enwave building. But instead of hiding everything inside concrete, the color-coded pipes and pumps are housed within a curved glass and mesh box. At night, with the interior lit, the building’s inner workings can be seen as the clouds of mist rise from the top. 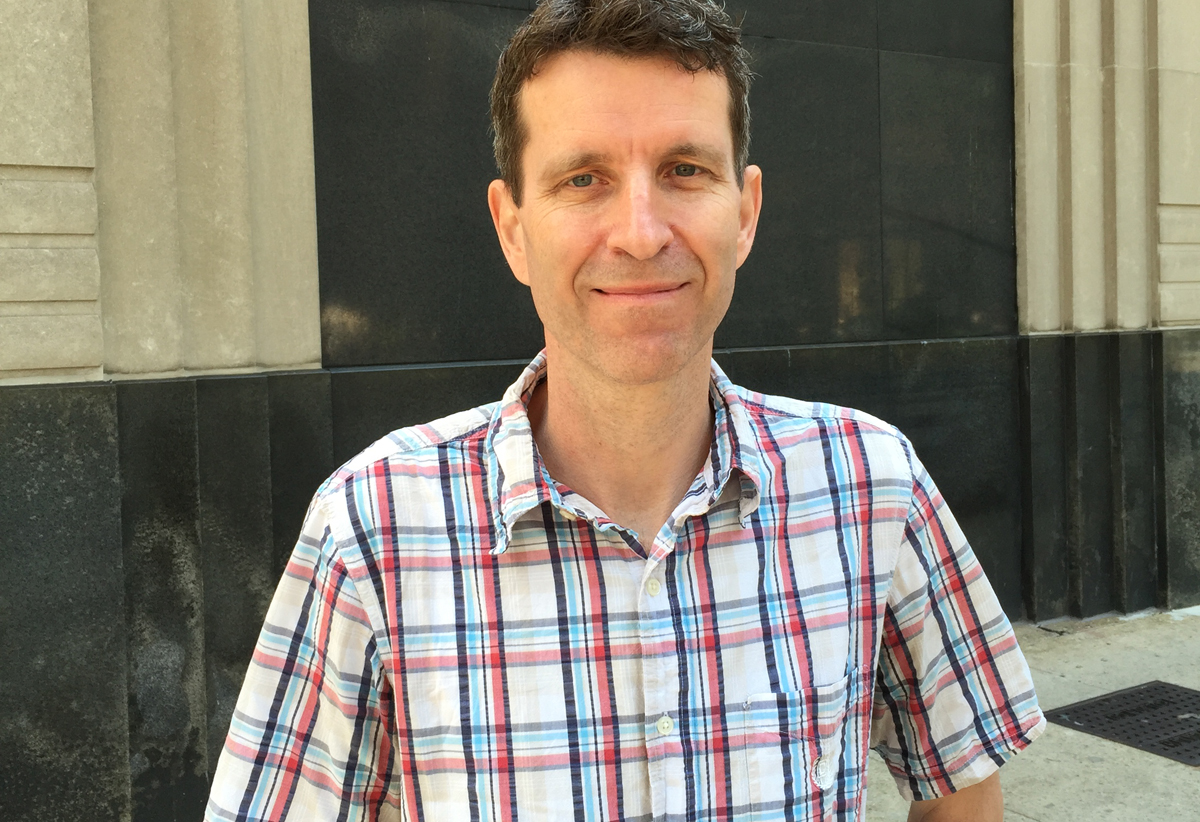 Tom Koehl is Walgreen’s Director of Consumer Experience. He lives in the Southwestern suburb, La Grange, and takes the train downtown most days for work. Whenever he has free time, he likes to go on urban “hikes” where he spots mysterious or out of place buildings. He remembers noticing the windowless design and what looked like steam billowing from the roof of the Enwave building on State and Adams. One day, he even heard somebody tell a friend there was a nuclear reactor inside. “I was like, ‘there’s no way that’s true,’ and that’s what got me thinking ‘I’ve got to figure out what’s in that building.’”

Jesse Dukes is Curious City’s Audio Producer. Jen Masengarb is Director of Interpretation and Research at the Chicago Architecture Foundation. Follow her @jmasengarb.