Chicago is famous for its ethnic neighborhoods. And there’s a funny thing about them. A neighborhood’s identity can seem like it has been in place forever, even when big ethnic shifts took place just one or two generations ago. This is how many Chicagoans see Pilsen and Little Village, a corridor with the biggest concentration of Latinos in the Midwest. These neighborhoods have so much vitality — dense housing, bustling commercial strips, packed playgrounds — that it seems like Latinos must have been there for ages. A curious citizen named CM! Winters-Palacio was wondering how long, so she asked us:

Why are Latinos concentrated in the Pilsen and Little Village neighborhoods? When did it happen? 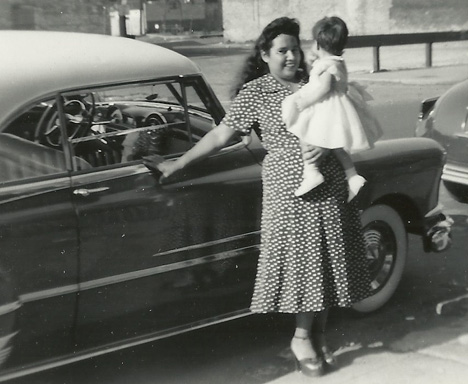 We answered the when part of the question just by looking at census numbers: Pilsen did not become mostly Latino until the 1960s; Little Village didn’t until the 1970s. Answering why those changes happened took a little more work. We interviewed experts, searched newspaper archives, pounded Pilsen’s pavement and tracked down some of the neighborhood’s first Latino residents. In our audio story (above), Lucy Gutiérrez, 87, tells us about bringing her family to Pilsen when the place was still populated mainly by Central and Eastern European descendants — including the Bohemians whose forebears named it after Plzeň, a city in what is now the Czech Republic. Our research also led to some text snapshots from the history. The snapshots begin on Chicago’s Near West Side, which included the city’s largest Latino enclave just a few decades ago.

In old neighborhood, the beginning of the end

FEBRUARY 15, 1949: A Chicago housing official complains about residents refusing to leave a 14-block stretch from Desplaines to Paulina streets to make way for a new superhighway along Chicago’s Congress Street. The official, Detlef E. Mackelmann, says some would not go “until the buildings next door were being torn down.” The highway’s first section, completed in 1955, will displace thousands of people. It will be among several massive construction projects that will raze much of the Near West Side, including a Mexican neighborhood that dates back to the 1920s. The projects will include three expressways, a university campus and public-housing developments. Some of those Mexicans will move to Pilsen, a neighborhood just south. They will form the nucleus of what will become a much bigger Latino community. The Congress highway, for its part, will eventually be named the Eisenhower Expressway. 1 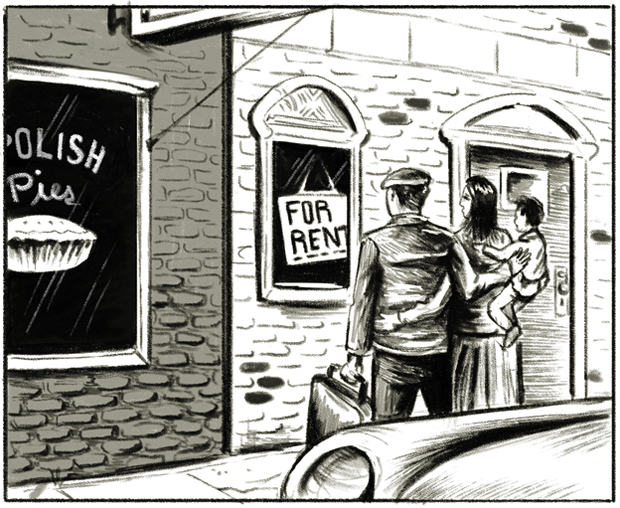 OCTOBER 18, 1953: St. Procopius, a 72-year-old Czech parish in Pilsen, rededicates its school with a Sunday dinner. The meal includes turkey, dumplings, sauerkraut, rye bread and kolacky. The music includes the Czech anthem "Kde domov můj?" and an Antonín Dvořák composition. Although the school has begun to enroll some of Pilsen’s first Latino children, today’s program includes no hint of their cultures. And Rev. Peter Mizera, the St. Procopius priest, has been complaining to the archdiocese about “the recent infiltration of the Mexicans.” But Pilsen’s white population is declining and growing older as young families head to suburbs. St. Procopius and other parishes will have to open their doors to Latinos. By 1955, six Pilsen parochial schools will be enrolling Mexican children. Over the next two decades, several Pilsen parishes will retool themselves, sending priests to learn Spanish in Mexico, building altars and shrines to the Virgin of Guadalupe, even bringing mariachi music into masses. Some other parishes, slow to adapt, will close. 2

MARCH 19, 1961: Led by a mariachi band, hundreds of Mexican protesters march from St. Francis of Assisi Church and tie up Near West Side traffic. The protesters slam a City Hall plan to replace their neighborhood with a University of Illinois campus. They blame Mayor Richard J. Daley and shout, “Down with Daley,” “Daley sold us out” and “Respeten nuestros hogares” (Respect our homes). The protest is part of a much larger effort to derail the university plan. Italians, the area’s biggest ethnic group, are leading the resistance but Mexicans are also visible. Roughly 4,800 of them live in the census tracts the city wants the university to take over. The resistance will fail. On May 10, the City Council will designate 106 acres for the campus. Some of the Mexicans will move a few blocks west, but campus expansions will displace them again. Many will end up in Pilsen. The University of Illinois Chicago Circle Campus, meanwhile, will open in 1965. 3

APRIL 24, 1969: More than 100 residents of Chicago’s Pilsen neighborhood gather for a public meeting of the Latin American Alliance for Social Advancement, known by its Spanish acronym, ALAS. The meeting occurs at Howell House, a community center focused for decades on Czech immigrants. At the meeting, ALAS endorses Arthur Vázquez to lead Howell House; he will be its first Mexican-American director. The meeting also develops strategies to improve Pilsen schools, expose police brutality and publicize a national grape boycott. The organizing reflects two major changes in Pilsen. First, Mexicans have been pouring into the neighborhood for two decades. Along with the arrivals from the Near West Side, many have come from South Texas or various parts of Mexico. A smaller Latino group in Pilsen has roots in Puerto Rico. The 1970 census will record the neighborhood’s first Latino majority. The other big change is the rise of the Chicano civil-rights movement. Reflecting that change, Howell House will get a new name: Casa Aztlán. 4 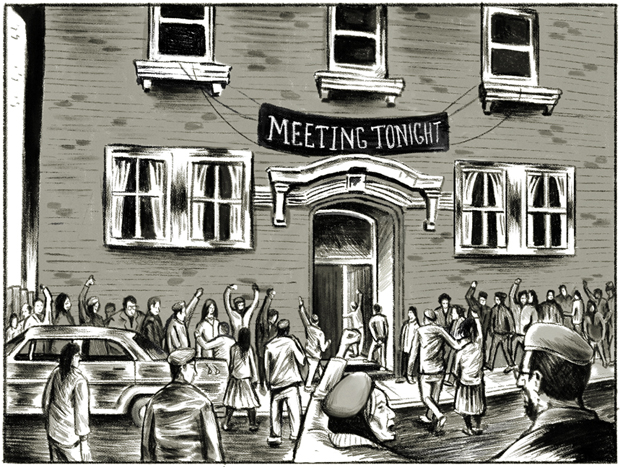 OCTOBER 30, 1979: At the urging of Latinos and veterans, the Chicago Park District board agrees to a proposed memorial plaza honoring Manuel Pérez Jr., a World War II hero killed by enemy fire at age 22 and posthumously awarded the Congressional Medal of Honor. Pérez grew up on the city’s Near West Side long before his neighborhood was razed and before many of its Mexican residents moved to Pilsen. The city will build the plaza in 1980 in Little Village, a Southwest Side neighborhood known as the “Mexican suburb” because of its proximity to Pilsen, its larger homes, and its fast-growing Latino population. Next year’s census will show that Latinos constitute the majority of Little Village residents. The Pilsen and Little Village corridor now has the largest concentration of Latinos in the Midwest. 5 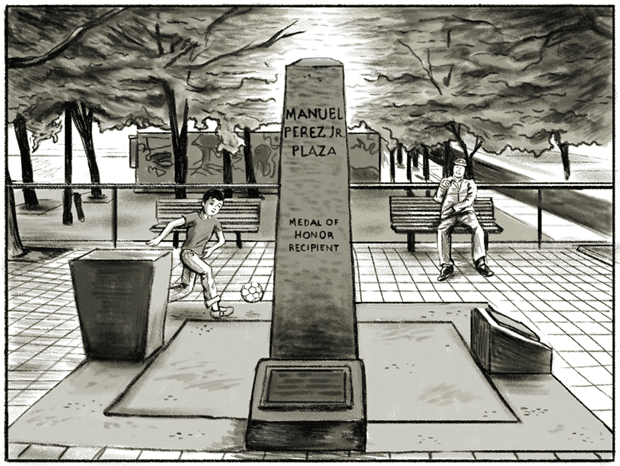 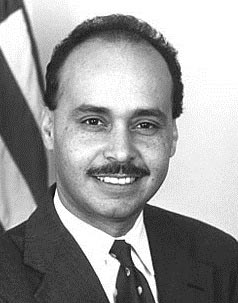 MARCH 17, 1992: In a Democratic primary election for U.S. House, Chicago Ald. Luis V. Gutiérrez (26th Ward) easily defeats his strongest challenger, Juan Soliz. A 1990 court order required a Chicago district with a Latino majority. Shaped like an earmuff, the district covers the Pilsen-Little Village corridor and Puerto Rican neighborhoods on the Northwest Side. Gutiérrez, who was an ally of the late Mayor Harold Washington, has Mayor Richard M. Daley’s backing in the Congressional race. After the general election, Gutiérrez will become the first Midwest Latino in the House. Although his family is from Puerto Rico, whose residents are born with U.S. citizenship, Gutiérrez will champion immigrant political causes and maintain strong support in Pilsen and Little Village. 6

Pilsen remains Latino, but for how long?

MAY 20, 1997: In the name of job creation, Ald. Danny Solis (25th) leads a rally for a plan that would extend the University of Illinois at Chicago southward to the edge of Pilsen. The Daley administration, meanwhile, is planning a tax-increment financing district to boost industry in Pilsen. Some residents are linking those efforts to gentrification on the neighborhood’s east end. Those residents say the changes are threatening Pilsen’s Mexican-American character and pushing rents and property taxes too high. This summer, artists led by Hector Duarte (7) will transform an outdoor wall at 1805 S. Bishop St. into a colorful mural called “Stop Gentrification in Pilsen.” The mural will depict United Farm Workers co-founder César Chávez and Mexican revolutionary leader Emiliano Zapata flanking a multigenerational Pilsen family, a pushcart vendor and anti-gentrification protesters. Such efforts will not stop affluent newcomers from moving into Pilsen but, for years to come, the neighborhood will remain the cultural heart of the Chicago area’s Mexican-American community. 8 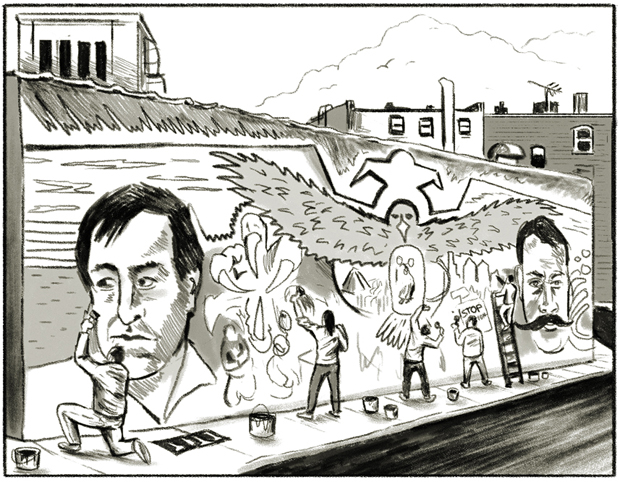 Our question comes from: CM! Winters-Palacio 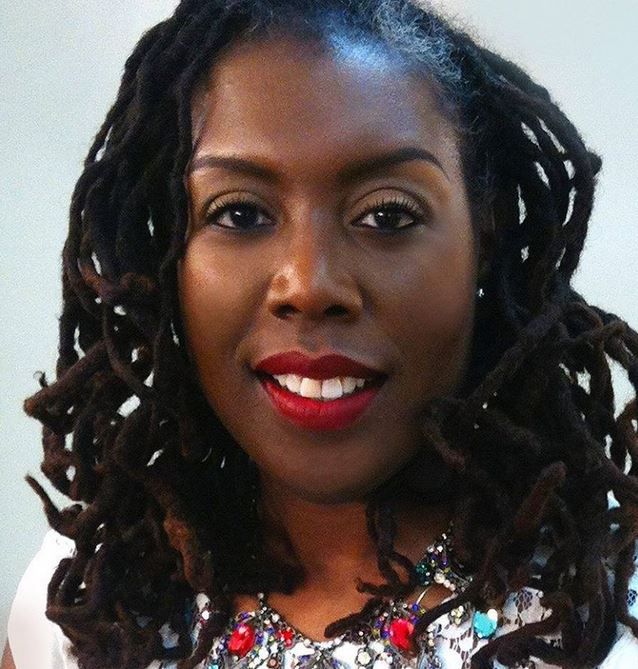 African-Americans in Chicago cannot help but look at the city’s most heavily Latino neighborhoods with some envy, according to WBEZ listener CM! Winters-Palacio, who lives in Auburn Gresham, a South Side neighborhood. “If you drive through Little Village or Pilsen, they’re thriving with little local stores,” she says. “When you go on the South Side, it’s a totally different experience.”

Winters-Palacio chairs Malcolm X College’s library department and tells us her interests include community development and racial segregation. So what does she think of our answer to her question? Pilsen’s Latino identity is “relatively new,” Winters-Palacio says. “It helps dispel one of the myths.” Namely, that a strong community must have long historical roots. Winters-Palacio says Pilsen and Little Village provide hope for her part of town.

Chip Mitchell is WBEZ’s West Side bureau reporter. Follow him @ChipMitchell1 and @WBEZoutloud. Erik Nelson Rodriguez is an illustrator and graphic designer in Chicago.