This week Chicago celebrates the 120th birthday of our beloved "L." The first trains began running on June 6, 1892.

In 1888 a group of private investors secured a franchise for the Chicago & South Side Rapid Transit. New York was already operating elevated trains over its avenues, but the Chicago group proposed to build their line along the property paralleling alleys. They figured that would be cheaper. The project was soon nicknamed The Alley "L." 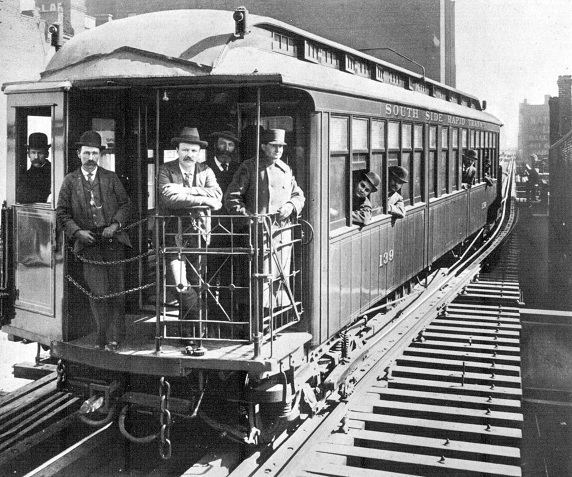 Construction began in February 1890. The initial line was to run from Congress Street to 39th Street (Pershing Road), along the alley between State and Wabash. But when Chicago won the right to host the 1893 Columbian Exposition, the franchise was revised to extend the line to the fair site in Jackson Park.

There were a few major differences in how the "L" operated in 1892. For one thing, the trains were pulled by steam locomotives. Patrons bought a ¢5 ticket from an agent in the ground-floor station, then climbed the forty feet to the platform, where the ticket was surrendered to the gatekeeper. The platforms themselves had iron railings trackside, to prevent passengers from falling onto the tracks.

The original segment of the South Side line was ready in the spring of 1892. After a few test runs, revenue service started at 7 a.m. June 6th, when the first northbound train left 39th Street. On board the four coaches were 30 passengers. After stopping at eight intermediate stations, Chicago’s first Monday rush hour train pulled into Congress terminal at 7:14—right on time.

It took a while for some people to get used to the "L." A teacher at Haven School complained that the noise of the trains made it difficult to conduct class. Others didn’t like the smoke from the coal-burning locomotives. Apartment-dwellers now had to keep their shades down in they wanted any privacy—young women were warned to be careful of roving Peeping Toms. 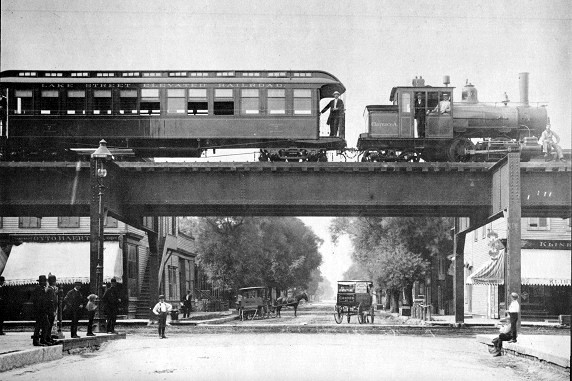 But it sure was exciting for the city to have this new kind of rapid transit! The Tribune reported that “servant girls, cooks, and chambermaids left their work to watch from back porches the fast-flying trains as they went by.” Within weeks of the first run, Chicagoans were already debating about where to put new "L" lines.