When the Clarence Buckingham Memorial Fountain opened in Grant Park in 1927, the Chicago Tribune sang its praises this way: “It’s an expression of the lake, by which it is fed and which it extols. It is the lyric of the lake.” 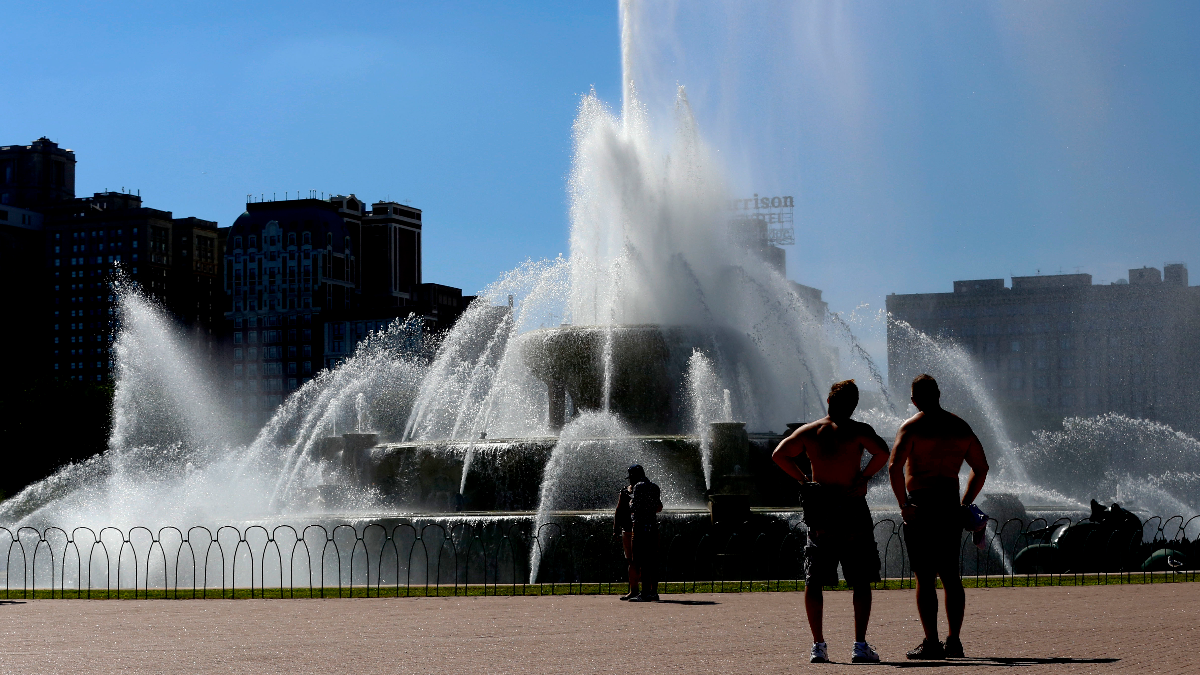 People are silhouetted as they look at the Buckingham Fountain Monday, Sept. 12, 2016, in Chicago. (AP Photo/Tae-Gyun Kim)

Buckingham Fountain, which started its 90th season on Saturday, was built as part of a 1920s effort to instill industrial Chicago with some of the grandeur of Chicago, which is one reason it's ironic that the fountain is best known as an icon of mind-numbing suburban life, thanks to being featured in the opening credits of the old Fox TV series Married With Children.

The fountain opened May 26, 1927 -- 90 years ago this month. The idea and money to build it came from one of Chicago's first great woman philanthropists, Kate Buckingham, whose family had helped make Chicago a headquarters of the nation's grain industries and had built the elevated rail lines that remain today as the South Side portion of the Green Line and the North Side portion of the Red Line, up to Wilson. The design was by Edward Bennett, whose Parisian-inspired designs for Chicago include the DuSable/Michigan Avenue Bridge and the columned peristyle in Grant Park that was rebuilt for the opening of Millennium Park. Bennett co-authored the plan of Chicago with Daniel Burnham in 1909.

The 1.5-million-gallon fountain is the centerpiece of Grant Park and the Crown Fountain of its day. Like the Crown Fountain as a focal point of Millennium Park, Buckingham Fountain is the visual heart of the grand formal gardens laid out around in, including the allees of trees along the streets, panels of lawn and formal hedges, and smaller, satellite fountains just off the edges of Buckingham's vast plaza.

The immensity of the fountain was supposed to evoke the magnitude of Lake Michigan, and the four seahorses in its pool represent the four states that border the lake: Illinois, Indiana, Michigan and Wisconsin. But the size of the fountain was also part of Chicago's self-confident swagger when it was the nation's industrial powerhouse. The enormous city also built the world's largest post office in that decade (in 1921), and the world's largest hotel, the 3,000-room Stevens, in 1927. (It's now the Hilton.)

As some know, the fountain was the gift of Kate Buckingham in memory of her brother Clarence. You can probably guess that the Buckinghams were rich, but do you know the role they played in Chicago history?

It was the Buckingham family, two generations before Kate and Clarence, who essentially made Chicago the stacker of wheat in Carl Sandburg's 'Chicago' poem. The family was based in Ohio until the 1850s, and owned large numbers of grain storage buildings in Ohio and Indiana. They came out to Chicago in the early 1850s, when the Illinois Central Railroad was being built, and foresaw Chicago becoming the transfer point for grain raised in the middle of America and headed to the East Coast. They built two large grain elevators near the mouth of the Chicago River, and launched a family fortune on them. The empire grew to include a fleet of tugboats on Lake Michigan and grain ships that sailed the Great Lakes.

Clarence and Kate were born in Zainesville, Ohio but moved here as children. Their sister Lucy was born here in 1870. The next year, after the Great Chicago Fire destroyed their home north of the Chicago River, the Buckingham family built a home on Prairie Avenue near Cullerton. They lived in the house for five decades. None of the three siblings ever married, and eventually, when her parents and her brother and sister had all died, Kate came to control a very large fortune. She gave large sums and collections of art to the Art Institute and became such a generous philanthropist that when she died, the Tribune's obituary described her as the "godmother" to the Art Institute, the "godmother" to the opera, and the "godmother" to 200 or more music and art students, and a heavy donor to the Field Museum.

When the architect Howard van Doren Shaw told her he could put his hands on two intact rooms from a centuries-old European castle, she bought both, one for her home in a new building on Lakeview, where she moved in the 1920s — and tore down the old Prairie Avenue mansion — and one for the Art Institute.

In January 1924, Kate Buckingham announced the first cash gift of what would become about $1 million to design, build and endow the fountain. 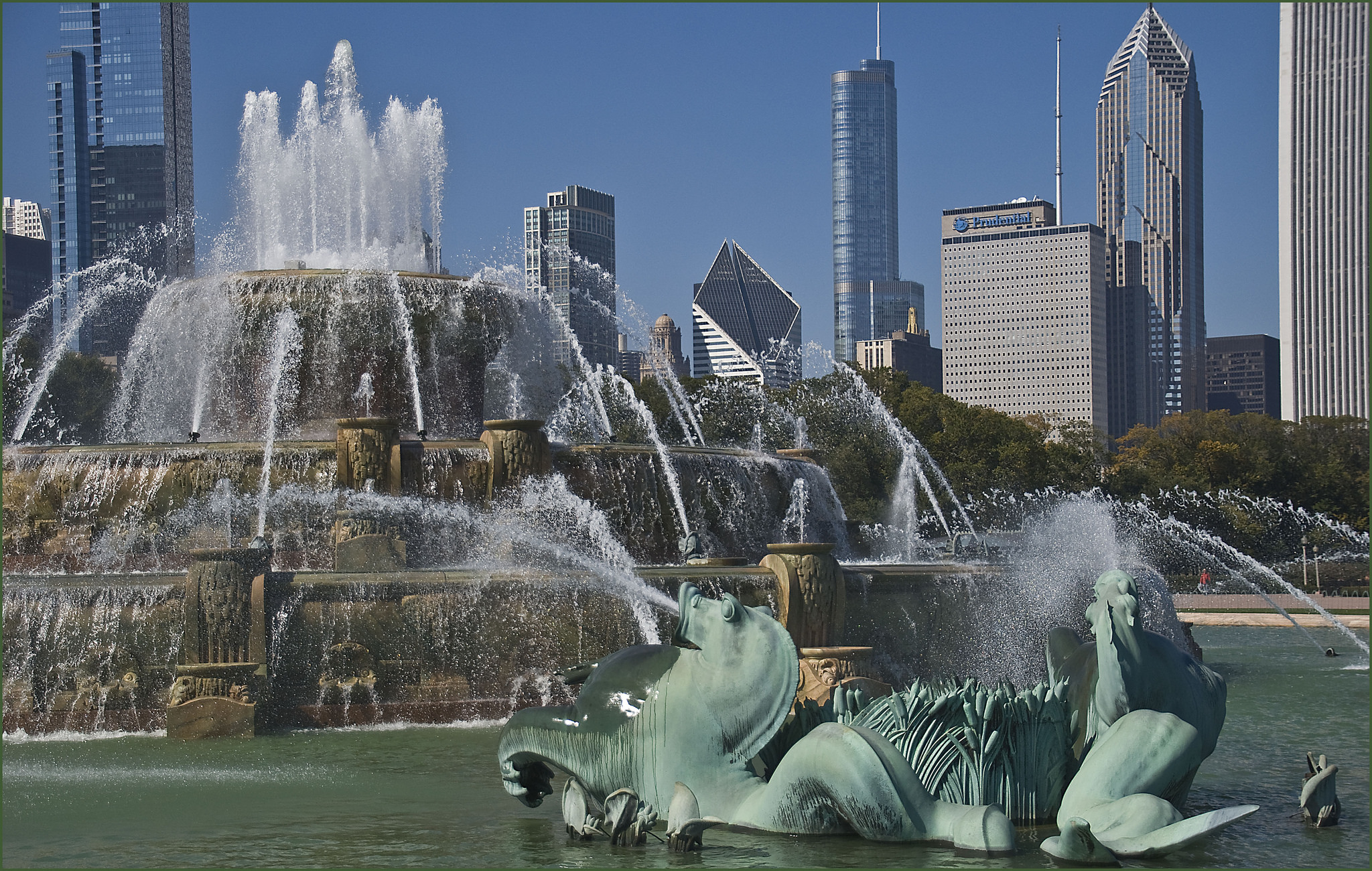 A 150' water jet shoots from the center of the Clarence F. Buckingham Memorial Fountain in Grant Park, Thursday, Oct. 16, 2014, in Chicago. The iconic fountain_one of the largest in the world_was dedicated and opened to the public in 1927. While in operation, every hour on the hour for 20 minutes, the Fountain produces a major water display which at dusk, is accompanied by a major light display. Buckingham Fountain will be closing for the on Sunday for the season. (Ron Cogswell/Flickr)

Edward Bennett, the architect who was overseeing the design of Grant Park as sort of an homage to the two great Parisian gardens, the Luxembourg Gardens and the Tuileries. He designed the fountain and tapped French sculptor Marcel Loyau to create the seahorses.

Kate Buckingham is reported to have wanted the lights on the fountain at night to simulate 'soft moonlight,' and personally worked with the lighting designers to create the light she wanted. The fountain opened in May 1927, a little more than three years after the plan was first announced, and had a grand opening in August, where the lights and music performed to accompaniment by John Philip Sousa's band.

The next year, Kate Buckingham started planning her next outdoor installation, a monument to Alexander Hamilton, a hero of hers. It didn't go as well as the fountain. Wrangling over design and site meant that the statue didn't get mounted on a public site for 24 years. By the time the Hamilton memorial opened in 1952, Kate Buckingham had been dead for 15 years.

Clarence died in 1913, the year after the siblings's father, Ebenezer Buckingham. After Ebenezer's death, Clarence was briefly in charge of the family's assets before he died, too.

Most write-ups say that Bennett's inspiration for the look of the Buckingham Fountain is the Latona Fountain at Versailles. Which is fine, but it's hard to find the similarity other than the stacked basins, which isn't all that uncommon. The Latona fountain is ringed at each level with sculptures of frogs or turtles and capped with a statue of Latona, who appears in Ovid's Metamorphoses as the mother of the twins Apollo and Diana. She's prevented from drinking out of a pond by local villagers, and turns them into frogs. It's hard to find a parallel to the Chicago fountain, which depicts the four border states as seahorses.

Although it's not named for Buckingham Palace, the fountain does have a connection of sorts to British royalty. In July 1959, England's Queen Elizabeth and Prince Philip arrived in Chicago on the Royal Yacht Brittania at the end of a voyage down the St. Lawrence Seaway. They disembarked (actually from a smaller shuttle boat) at the water's edge immediately across Lake Shore Drive from the fountain. They were met by Mayor Richard J. Daley and Gov. William Stratton. 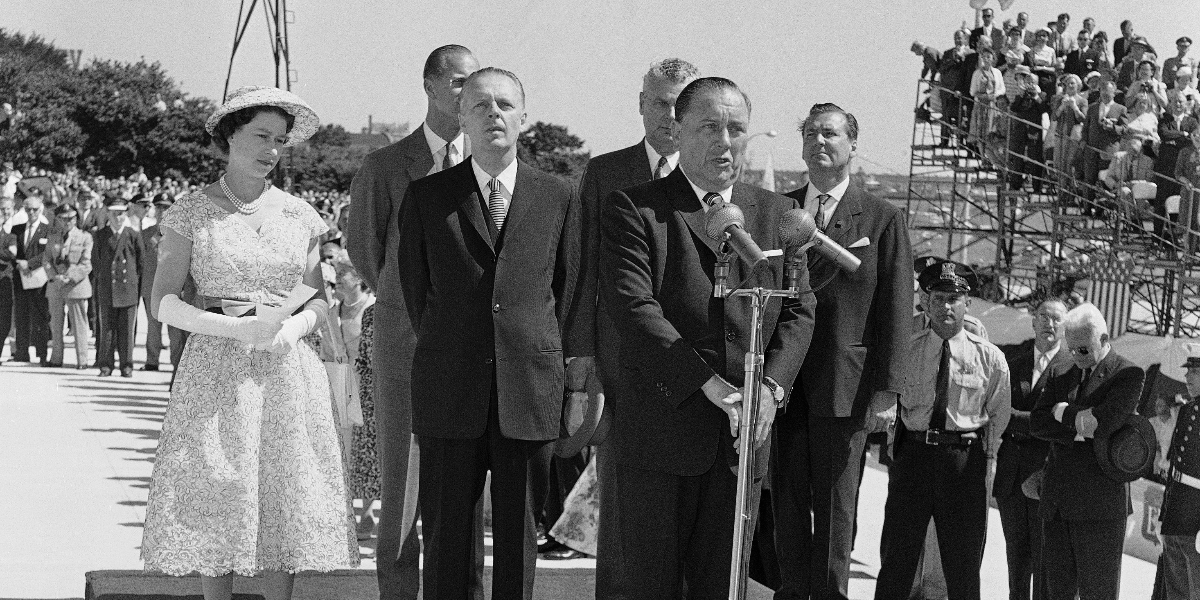 Queen Elizabeth II stands waiting for her escorts to welcome her to Chicago, before taking the limelight again with a greeting to the city, text of which she holds, July 6, 1959. Mayor Richard Daley speaks. Others, left to right, background, Prince Phillip, Gov. William G. Stratton, Canada's Prime Minister John G. Diefenbaker, and Wiley Buchanan Jr., of the State Department. (AP Photo/Harry Hall) 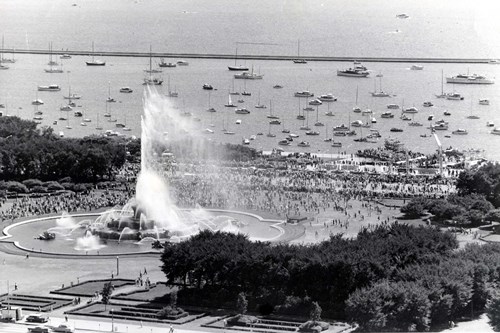 - When Queen Elizabeth II visited Chicago during a trip to the United States in the late 1950s, she ceremoniously crossed a red carpet from Lake Michigan to the Buckingham Fountain, CPD Special Collections, 1959. (Courtesy of Chicago Park District)