San Francisco has the Golden Gate Bridge. For New York City, it’s the Statue of Liberty. Chicago? It’s got Buckingham Fountain, an icon that mingles water, multi-colored lights, and granite, as well as bronze and pink georgia marble. Not to mention a jet that sprays water to seemingly impossible heights.

The fountain’s wow factor has entranced questioner Alan Ireland, an HVAC contractor and a self-described “pump guy.” While growing up in Chicago, he wondered how the fountain works and heard lore of a hidden engineer who kept the displays going. Combined, those led him to ask Curious City:

I hear that Buckingham Fountain is run off of one individual pump and that there is one employee whose responsibility it is to keep the fountain running. Is that true?

Well, we got enough special access to answer Alan’s question about the fountain’s inner-workings, but as we learned more about the history, we also encountered a fascinating backstory about how Chicago came to have this grand landmark in the first place. Here’s a hint: The fountain was a compromise — a way to establish a public lakefront without creating too much clutter.

What does it take to make Buckingham Fountain tick?

When I ask Alan to describe the childhood legends he’d heard, he says, “This might come out really wrong, but like the troll under the bridge that keeps the bridge going or whatever. That sounds terrible. ... Let’s call it the lighthouse keeper!”

Instead of the proverbial troll under the bridge, we find tall, blue-eyed Eric Kelmar, an assistant chief engineer for the Chicago Park District. He manages the team of about five engineers who tend to Buckingham Fountain. Kelmar explains that due to the high priority of site, “We try to keep it to a small family of people who operate it daily.”

Every morning, from April 1 through mid-October, one of Kelmar’s team throws on a pair of waders and pulls out any debris that birds may have lodged in the fountain’s screens and baskets overnight.

Then, at 8:00 a.m., the engineer manually starts up the fountain. An hour later, the first water-show begins. Kelmar says the fountain’s center jet can shoot water as high as 150 feet in the air, depending on wind conditions. That’s 15 stories.

How many pumps does it take to pull that off?

Kelmar takes me down into Buckingham Fountain’s underground pump room, which has three big pumps, each one being original 1927 DeLaval hardware. Their combined power totals 575 horsepower. (For context, a car in 1927 ran on 25 horsepower. Today, the average Toyota Corolla has approximately 140 horsepower.)

Kelmar says these old pumps require TLC, but they are built to last. “Five years ago, we had them completely pulled out of the pump house and rewound, and they said there's no reason to replace [them],” he says. “They were well-built and, with the new upgrades, they could last another 100 years.”

No planned obsolescence here. In fact, Kelmar says that if they were to replace the original pumps, they would need about 24 modern pumps to do the same job.

In the past, the fountain’s pumps were operated manually. Two engineers would alternate 12 hour shifts: 10 a.m. to 10 p.m. You can still see the original bronze levers they used to control those pumps upstairs in the fountain’s control room.

The fountain’s light-show was also analog. The engineer would improvise each show on a complicated light board, littered with dozens of dimmers and switches. Chicago Park District historian Julia Bachrach explains that the engineer’s creative decisions were not well-received.

“In 1932, there were complaints that the engineer had garish taste and that he didn't know how to mix the colors properly to make a beautiful light show,” Bachrach says. “So they brought in a theatrical lighting designer to help kind of create a program.”

The light system went automatic in 1968 and, according to Bachrach, the fountain was computerized in 1980. The fountain’s first computer was a Honeywell system which, from 1983 to 1994, was run out of a Honeywell office in Atlanta, Georgia. Later, the computer was moved to the Chicago suburb of Arlington Heights, before operations came full circle to the fountain’s own control room. Today the fountain runs on an Allen-Bradley Programmable Logic Controller.

But, you can still override the system with the flip of a switch. Kelmar shows me the control panel, which sports an array of labeled switches: “SEA HORSES,” “MUSHROOMS,” “ISOLATED JETS,” and “INNER TOP BOWL."

Opting for the seahorses, of course, I throw the switch from “auto” to “off” and, after a 13-second delay, the valves in the fountain’s seahorses close. A loud sound emanates from the pump room below our feet and (voila!) the seahorses stop spitting. After a moment, the computer catches up, and the seahorses on the system’s display change from green to red.

I quickly flip the switch back before any tourists get agitated. I wouldn’t want to ruin any selfies.

The backstory on why the fountain’s so grand

The fountain’s pumps were built to last, but they were also built to impress. But ... impress whom? And why? Bachrach says it’s important to understand what was in Grant Park before 1927, when Buckingham Fountain was completed. To set the scene, she explains that the area was mostly ash, trash and debris. “For years and years, there was this raw, kind of landfill, just flat dirt terrain,” she says.

The public debated what to do with this eyesore. Some people wanted to erect a massive building that celebrated everything splendid and grand. Inspired by the extravagant French Palace of Versailles, this faction craved a building that would truly establish Grant Park as the seat of architectural excellence.

Mail-order magnate Montgomery Ward opposed such a building. Ward was a major entrepreneur and, like Chicago’s founding fathers, he felt the city’s lakefront should remain “Forever Open, Clear, & Free.” Plus, his office had a great view of the lake.

In 1909 Ward got his way, and architect Edward Bennett began building a compromise. Bachrach says Bennett must have asked himself, “If you couldn't have the palace of Versailles as the visual focal point for the park, what would you do?” According to Bachrach, Bennett “created what was then believed to be the world's largest fountain ... inspired by a beautiful fountain at Versailles.” (That fountain is the Latona Basin, to be precise. And Buckingham Fountain is about twice its size.) 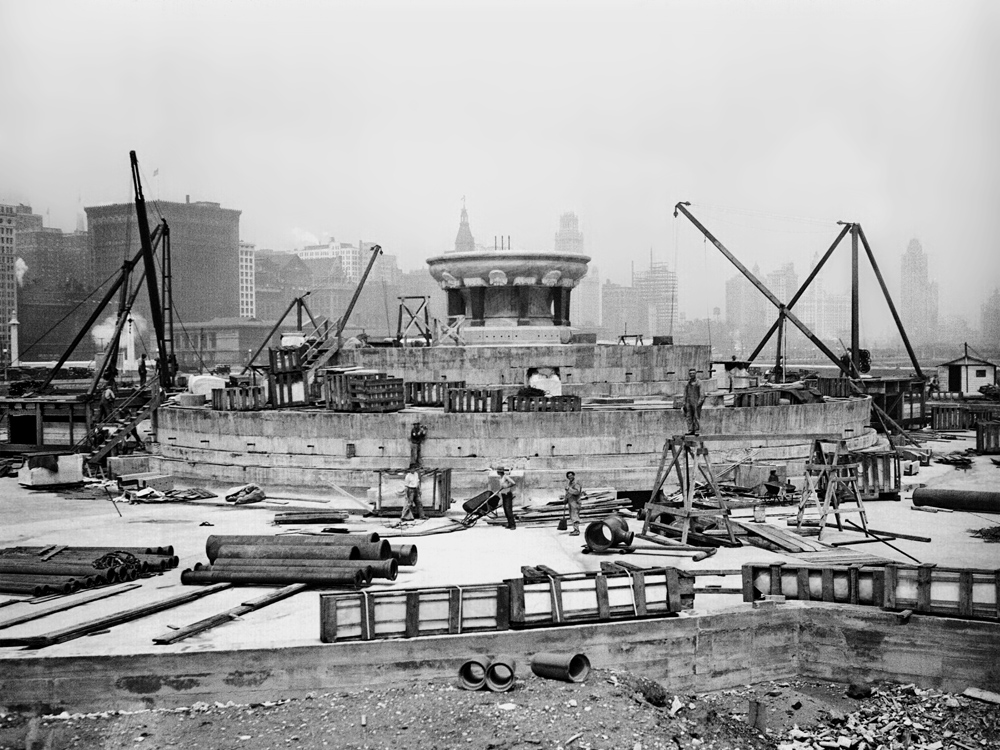 Bennett had found the perfect balance; his fountain would celebrate the architectural grandeur that was in vogue at the time, without obstructing the view of the lakefront. But he had a problem: Taxpayers would not fund such an opulent project, no matter how unobtrusive its design. So Bennett approached philanthropist Kate Buckingham, whom Bachrach describes as a real character.

“She was known for being very sort of cavalier,” Bachrach says. “She was a woman who would speak her mind. I've heard she didn't mind using bad language occasionally.” 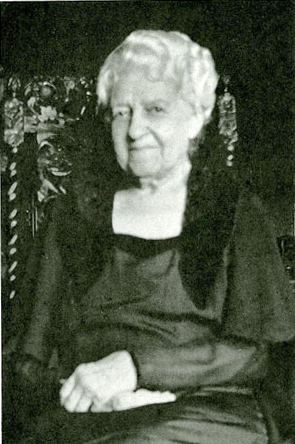 Buckingham’s family had made a fortune in grain elevators and she was the last remaining heir. Bachrach says that Buckingham asked Bennett and his team how much the fountain would cost. According to Bachrach, Bennett gave an estimate of about $300,000.

Ever the generous woman, Buckingham decided to fund the fountain and to name it in memory of her late brother, Clarence. She liked the idea of building a beautiful, democratic space where everyone from secretaries to executives could come eat their lunches, chitchat and enjoy the lake.

Bennett’s final design was meant to celebrate Lake Michigan, with one bronze seahorse for each of the four states bordering the lake. All of the bronze work was done by an up-and-coming French sculptor named Marcel Loyau, who was later awarded the Prix National, a prestigious French art award, for designing the fountain’s sculptural elements.

Clearly, construction wasn’t cheap. “By the time all was said and done, she donated slightly over a million dollars,” Bachrach says. “Which included $750,000 to build the fountain and a $300,000 endowment.” (All told, this adds up to more than $13 million in today’s figures.)

Finally, on August 26, 1927, The Clarence Buckingham Memorial Fountain was ready for the public.

“At the time that it was dedicated, they had a lot of hoopla, they knew this was a big deal,” Bachrach says. “John Philip Sousa's orchestra played Pomp and Circumstance. ... Tens of thousands of Chicagoans gathered, they say 50,000. ... And, of course, Kate Buckingham was in attendance.”

Does the fountain still captivate?

Buckingham Fountain made quite the impression on the citizens of Chicago. A week after the dedication, a Chicago Tribune columnist waxed poetic:

“In a week the Buckingham fountain has captured the imagination of the town, enlarged its aesthetic sense, and done it spiritual good.  … It is the lyric of the lake. It will never grow old or commonplace.”

But, almost 100 years later, does Buckingham Fountain still capture the city’s imagination? It’s certainly Chicago’s calling card. If there’s an establishing shot of the Windy City in a film or a television series, chances are it depicts Buckingham Fountain in the foreground, juxtaposed with Chicago’s modern skyline just behind. Pick up a tourist brochure of Chicago, and it’s likely that Buckingham Fountain is one of the first images you’ll see inside. In 2008, President-elect Barack Obama gave his victory speech in Grant Park as throngs of people encircled the fountain to listen to him speak. And, there are more than a few videos floating around the Internet of different flash mobs dancing in front of the fountain before someone inevitably gets down on one knee and pops the question. (She says yes).

For an informal survey, I talk to tourists zipping around on segways, a model posing for the camera in a long, white dress, and people cooling off in the fountain’s spray. Everyone I talk to is impressed with this place, including Kevin Doerksen, a native Chicagoan who runs a professional tour company. He says that when people visit the city, Buckingham Fountain is on the top of his itinerary, but not necessarily for the site’s historical merits. With a shrug, he explains that people want to see the fountain from the opening credits of the nineties sitcom, ‘Married With Children.’ Inevitably, he says, “We always want to come down and see the Al Bundy Memorial Fountain.”

Barabas Shane from Atlanta, Georgia, beams as he snaps a picture of the fountain. “We love ‘Married With Children,’” he says. “I finally got to see it and it's real,” he gushes. “I was like, this couldn't be real. But this is beautiful.”

As the Tribune writer predicted, it seems Buckingham Fountain has grown neither old nor commonplace, after all. 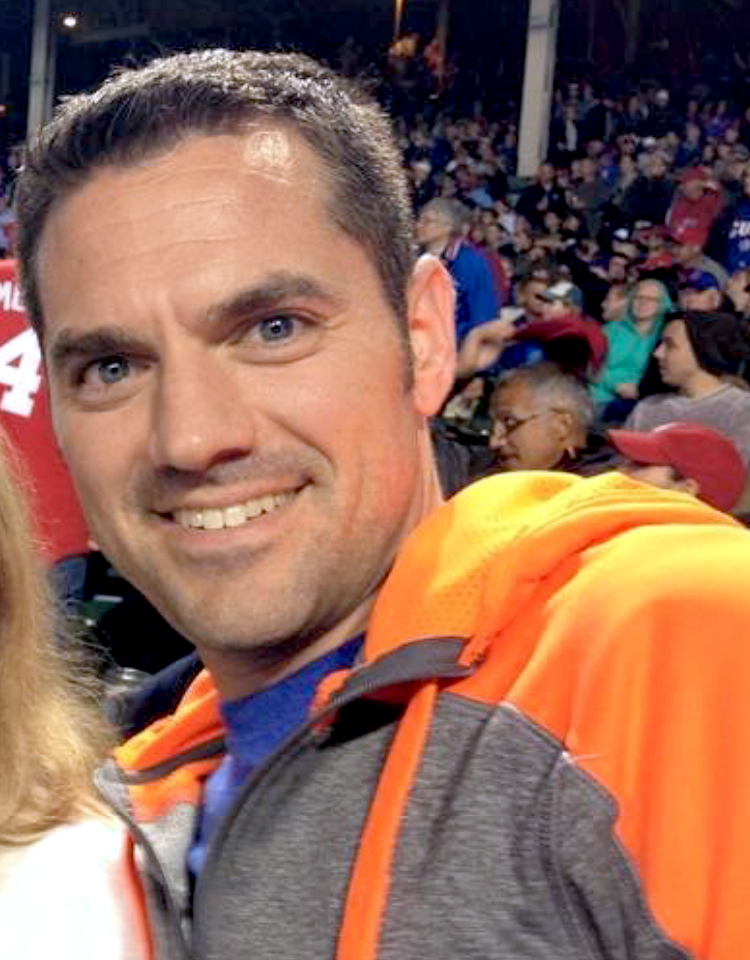 Alan Ireland, 35, grew up in north suburban Libertyville. When Ireland was a kid, his family would frequently take trips into the city. “We always made it a point to walk down towards Buckingham Fountain, just to watch all the pumps go,” Ireland explains. “So it was always just kind of a really cool, neat fountain, cause you don't see a lot of those in America and the magnitude of it is pretty awesome.”

Ireland’s interest in pumps runs in the family. In fact, he oversees operations and sales for the family business, Ireland Heating and Air Conditioning. Ireland explains that his work entails everything from “forced air and hot water pumps, water pumps, and things of that nature for both residential and commercial facilities in the northern suburbs.”

But Ireland’s curiosity about Buckingham Fountain isn’t purely technical. “I think the inner workings of the city of Chicago and the backbone and the tunnel systems and everything else that keeps the city running ...  It's just really curious to see the marvels that nobody really looks at or even thinks about on a daily basis.”

Ireland now lives in Chicago’s Andersonville neighborhood. In his spare time, he is a member of the Chicago Metropolitan Sports Association.

Chloe Prasinos is an independent reporter and producer based in Chicago. Follow her @chloeprasinos. 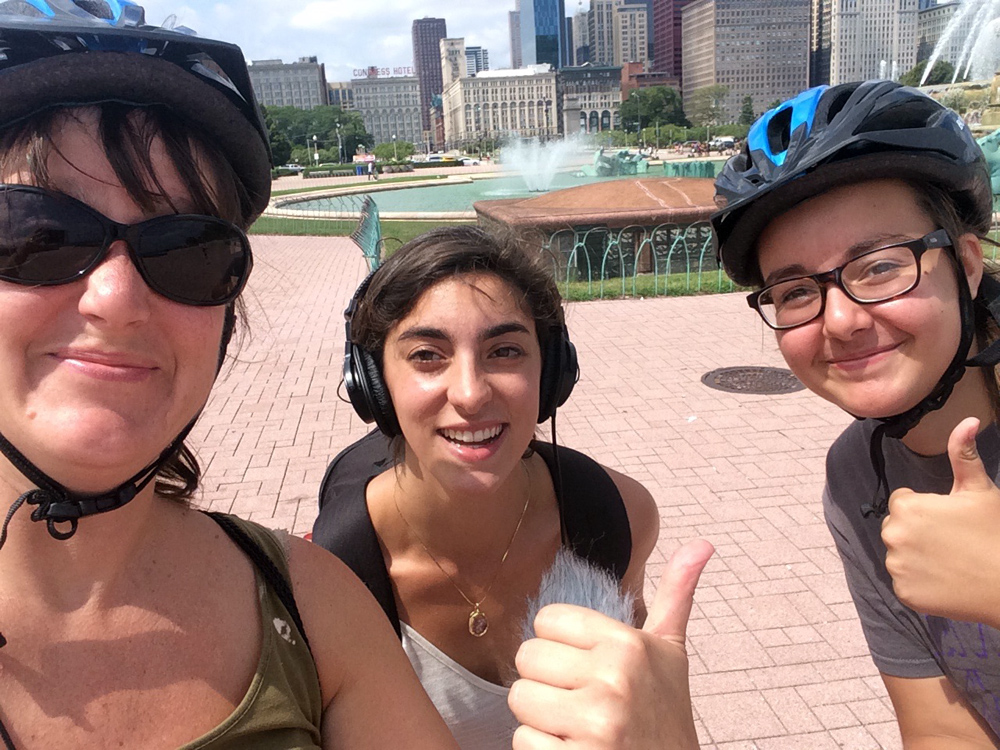