Federal Judge Ann Donnelly in Brooklyn, N.Y. granted a request by the American Civil Liberties Union and issued a stay late Saturday on the deportations of valid visa holders after they have landed at a U.S. airport. The ruling by Donnelly temporarily blocks President Donald Trump’s executive order on immigration signed Friday.

According to NPR’s Hansi Lo Wang:

“In her order, Judge Ann Donnelly cited “substantial and irreparable injury to refugees, visa-holders, and other individuals” from Iraq, Syria, Iran, Sudan, Libya, Somalia and Yemen, as well as a strong likelihood that deporting these individuals would violate “their rights to Due Process and Equal Protection guaranteed by the United States Constitution.”

The stay will last until a court hearing is held on the merits of this case brought by the ACLU and other legal organizations. It applies to “all people stranded in U.S. airports,” according to a statement by the ACLU. They say the stay will affect 100 to 200 people detained at U.S. airports or in transit.

The Department of Homeland Security issued a statement a few hours later, saying it “will continue to enforce all of the president’s Executive Orders in a manner that ensures the safety and security of the American people.” The department continued:

“The president’s Executive Orders remain in place—prohibited travel will remain prohibited, and the U.S. government retains its right to revoke visas at any time if required for national security or public safety. The president’s Executive Order affects a minor portion of international travelers, and is a first step towards reestablishing control over America’s borders and national security.” 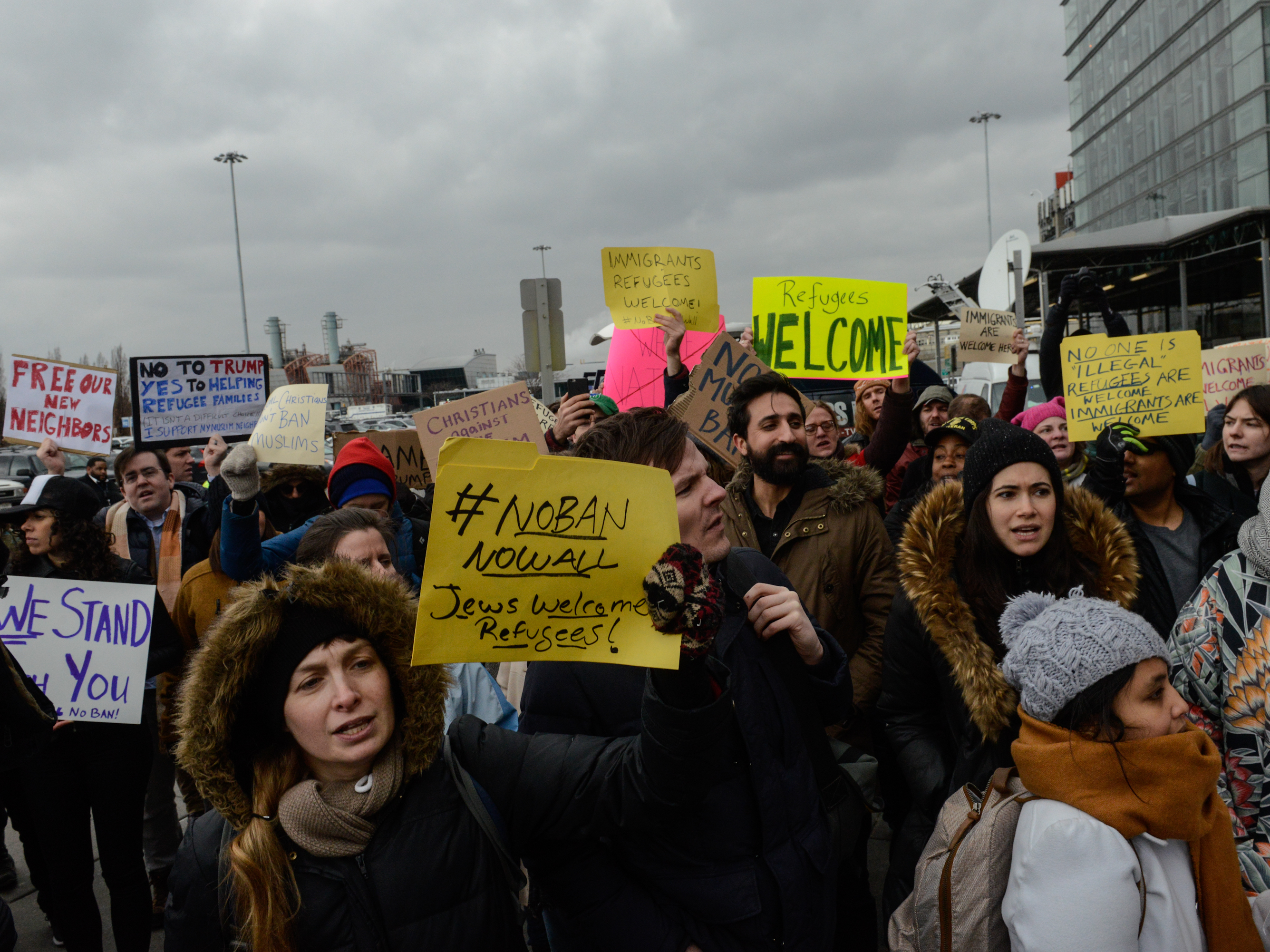 In response to the order, in Chicago, all remaining detainees were freed after being detained by Customs and Border Protection agents at Chicago O’Hare International Airport Saturday. At least 16 people were detained; most had legal status and green cards, NPR’s David Schaper reports.

In Virginia Saturday night, Judge Leonie M. Brinkema of the U.S. District Court for the Eastern District of Virginia issued a temporary restraining order affecting 63 people detained at Dulles International Airport outside of Washington, D.C. It ordered authorities to “permit lawyers access to all legal permanent residents being detained” at Dulles, and said authorities are “forbidden from removing” the permanent residents for seven days.

Also Saturday, Judge Thomas S. Zilly of the U.S. District Court of the Western District of Washington at Seattle granted an emergency stay of removal for two people, which orders authorities not to remove them from the country pending a hearing later this week.

Reuters reported that a senior Homeland Security official said roughly 375 travelers were affected by the order: One hundred and nine in transit to the United States were denied entry into the country and another 173 people were stopped by airlines from boarding an aircraft to the United States.

The original story continues below:

President Trump’s executive order on immigration is sending shockwaves across the U.S. and the globe.

Just one day after he enacted a ban on the admittance of all refugees to the United States, temporarily freezing immigration from seven mostly Muslim countries, confusion, chaos and fear are roiling international airports. Refugees are being barred from boarding U.S.-bound flights. Immigrants are being detained at U.S. airports.

Protests are rising up at JFK and Los Angeles airports. Thousands of leading academics have signed a petition denouncing Trump’s actions. And top technology companies whose staff have been affected, are criticizing the move by the president.

To cement the exigency of this move, on Saturday afternoon the State Department issued the following statement.

Urgent Notice
Per the Executive Order on Protecting the Nation from Terrorist Attacks by Foreign Nationals signed on January 27, 2017, visa issuance to nationals of the countries of Iraq, Iran, Libya, Somalia, Sudan, Syria and Yemen has been suspended effective immediately until further notification. If you are a citizen of one of these countries, please do not schedule a visa appointment or pay any visa fees at this time. If you already have an appointment scheduled, please DO NOT ATTEND. You will not be permitted entry to the Embassy/Consulate. We will announce any other changes affecting travelers to the United States as soon as that information is available.”

I am an Iranian PhD student at Yale Uni. Now overseas to do research. Trump’s EO might prevent me from returning to the US! #MuslimBan

Earlier in the day, several Iraqi refugees in Cairo, who had been cleared for resettlement in the U.S., were blocked from boarding their flight to New York City. And in Iraq, NPR’s Jane Arraf reported that “members of Yazidi minority, one of the biggest victims of ISIS, were prevented from boarding despite having visas.”

Green card holders — legal permanent residents of the U.S. — are also included in the ban, according to a senior Trump administration official. The official says they will need a case-by-case waiver in order to return to the U.S. if they are currently outside the country.

NPR’s Aarti Shahani told our Newscast that the CEOs of leading technology companies are taking a stand.

“Google CEO Sundar Pichai said in an email to staff on Friday that the executive order affects at least 187 of his employees and that it’s, quote, “painful to see the personal cost” of this move by the president. He said the company is “upset” about any immigration restrictions that prevent “great talent” from coming to the U.S.

“Facebook CEO Mark Zuckerberg wrote in a post on his facebook page that “We need to keep this country safe, but we should do that by focusing on people who actually pose a threat.”

“Travis Kalanick, chief of Uber, wrote in an email to his staff (and posted on Facebook) that about a dozen employees were affected, and that this ban will impact many innocent people. He said it’s an issue he plans to raise this Friday — when he goes to Washington. He is part of President Trump’s business advisory group.”

Expedia, Inc., a U.S. company that owns and operates several global travel brands, also issued a statement in response to Trump’s order. In an email sent to NPR from its director of policy communications, Philip J. Minardi he noted that CEO Dara Khosrowshahi said:

“Ours is a nation of immigrants. They are at our roots; they are our soul. The President jeopardized that with the stroke of a pen. As Expedia, Inc., we will do everything we can to protect and help our employees and travelers. That’s our job. Hopefully our government can do its job thoughtfully and with respect for our immigrant past.”

Two Iraqi men were held at Kennedy Airport in New York on Saturday. The ACLU and other legal organizations filed a writ of habeas corpus for the two men Saturday in an attempt to obtain their clients’ release.

One of those men, Hameed Khalid Darweesh, was later released from detention on Saturday, U.S. Rep. Jerry Nadler tweeted.

Both Darweesh and Haider Sameer Abdulkhaleq Alshawi had been granted U.S. visas after the federal government “deemed both Petitioners not to pose threats to the United States,” the court filing reads. The filing says both men are being held at the airport by Customs and Border Protection “solely pursuant to an executive order issued” Friday.

ACLU attorney Cecilia Wang tells NPR that Darweesh had arrived with his wife and child, but that he was held behind as his family was permitted to proceed. For his part, Alshawi’s wife and child live in Houston with green cards, Wang says.

Brandon Friedman, a U.S. Army veteran and former Obama administration official, explains to NPR’s Scott Simon that Darweesh worked with him as a translator during his service in Iraq. Darweesh was “approved for a special immigrant visa, given for his time and service to the U.S. government,” Friedman says.

Late Friday, Friedman began tweeting about his opposition to Trump’s order, as well as a photo showing a pair of men he said helped his team and were “no longer welcome in the U.S.”

“Hameed was one of the first people to sign up to work with us. He helped interpret, he hooked us up with things that we needed and helped us generally get through the communities that we were operating in in Iraq,” Friedman tells Simon. “And he put his life on the line. He risked his family’s life to do that.”

In a joint statement, Reps. Nadler and Nydia Velazquez say they are continuing to work for the release of 11 other people still held at the airport in New York.

News of both sets of detainments follows on the heels of Trump’s Friday order, which also halted all refugee admission to the U.S. Trump’s freeze on immigration applies not only to people from Iraq and Yemen, but also Syria, Iran, Libya, Somalia and Sudan.

“Deteriorating conditions in certain countries due to war, strife, disaster, and civil unrest increase the likelihood that terrorists will use any means possible to enter our country,” the executive order reads.

Order shuts door to all refugees

“The order shuts the door to all refugees for four months and suspends entry of Syrian refugees indefinitely. It shrinks the overall refugee program by more than half. Trump told a Christian broadcaster that preference will be given to Christian refugees from the Middle East.”

Colleges and universities around the U.S. have been advising students from the seven listed countries — including lawful permanent residents — not to leave the U.S. until there is further clarity on the new rules. Students at Princeton, Stanford and Chapman University, among others. reported letters from their respective schools recommending caution.

The Chronicle of Higher Education noted one Iranian student in Yale’s Ph.D. program who says he may be stranded after leaving the U.S. for a research trip.

As NPR’s Greg Myre reports, Trump’s executive order “doesn’t include any countries from which radicalized Muslims have actually killed Americans in the U.S. since Sept. 11, 2001.”

Greg notes that the countries of origin of radicalized Muslims who have killed Americans on U.S. soil, beginning on Sept. 11, are instead Egypt, Saudi Arabia, Lebanon, Russia, United Arab Emirates and Pakistan.