“Let me explain something. Deep dish pizza is not only NOT better than New York pizza – It’s not pizza,” said Stewart, calling it “tomato soup in a bread bowl. … I don’t know whether to eat it, or throw a coin in it and make a wish."

Some upset Chicagoans made their own kind of wish – Mayor Rahm Emanuel sent Stewart a pizza with anchovies and a note: “Dear Jon, Deep Dish with Dead Fish.”

It’s as if the whole city rose up to defend their pizza. But is it really? Just how deep is Chicago’s connection to deep dish? Thanks to a trove of largely untapped pizza data we're closer than ever to answering this question, and the results are surprising.

Pizano’s Pizza & Pasta near the Loop sells deep dish and thin crust. Owned by a member of the Malnati pizza clan, it's not as well known as tourist destinations like Uno’s Pizzeria and Gino’s East, but is popular with out-of-towners and downtown office workers alike. During a recent lunch hour, most of the locals were eating…thin crust.

Pizano's waiter Terry Morrison could sympathize. “I grew up in Chicago and I don’t ever really jones for deep dish pizza, I’d rather just have a thin crust,” he said.

"Nearly 9 percent of orders are deep dish or stuffed pizza. So anything that’s not a deep dish pizza is 10 times more popular in the city of Chicago," says Mack.

That’s right, in the neighborhoods where Chicagoans actually live and order takeout, they prefer thin crust over deep dish by a margin of 10 to 1. (Other fun fact: we are 12 times more likely to put spinach on deep dish than thin crust) 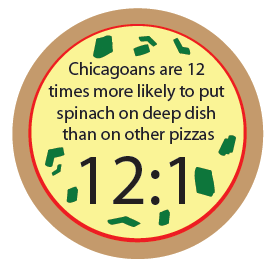 Pizano’s is one of the restaurants included in GrubHub's data set, which includes last year’s takeout/delivery pizza orders for half of the roughly 600 pizzerias in Chicago.

But Darren Tristano, a food industry researcher at Chicago-based Technomic, questions some of the data, noting that GrubHub’s users tend to be younger with less money to spend. And yes, deep dish is more expensive – by an average of 20 percent according to GrubHub.

“It tends to be a much more indulgent product and if you look at any of the health and wellness trends, there are a lot of reasons why consumers are shifting to thin crust pizza,” he said.

In fact, less than half of the pizzerias in Grubhub’s sample even offer deep dish on the menu.

Local deep dish chains like Giordano's and Lou Malnati's do, yet they’re not affiliated with GrubHub. Those two chains have a combined 20 restaurants in Chicago – and sell about three times as much deep dish as thin crust, which complicates the picture slightly. 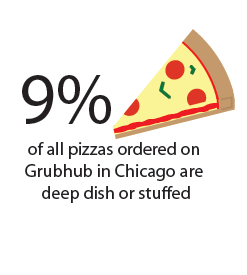 But other food industry research firms like Food Genius and CHD back up GrubHub’s methodology. And a look at the city’s history raises more questions about Chicago’s true pizza legacy.

It was developed on the South Side of Chicago to keep working men in taverns. Free pizzas would go out on the bar, the workmen would snack on them and stay there for an extra hour or two. It made all the difference in how much beer they drank.

"And that’s one of the styles that we grew up with. I didn’t even really have deep dish until I was almost in high school," Porter says. "So I truly do feel that the thin crust tavern style is the true Chicago style.”

Marc Malnati, the 4th generation owner of deep-dish chain Lou Malnati's, doesn't agree. After the infamous pizza rant, he brokered an on-air truce with Stewart over one of his deep dish pizzas. 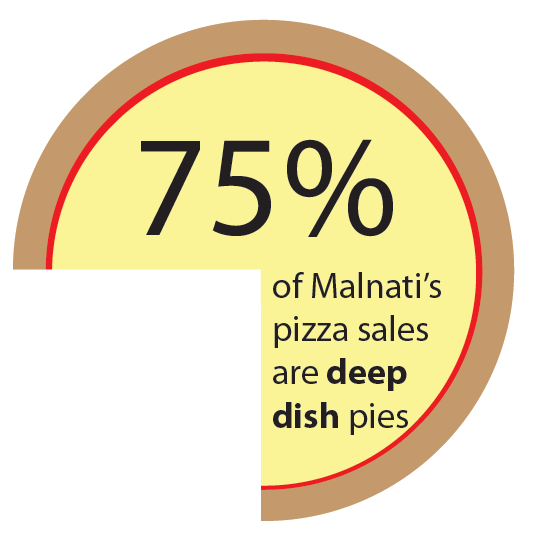 "I think that the deep dish pizza has been and always will be Chicago’s pizza," Malnati says.

Since 2005, Lou Malnati’s has opened 15 locations and tripled its mail order business. At his company’s north suburban headquarters this week Malnati joined other workers in packing up more than 10,000 frozen pizzas to ship in time for the holidays.

“This will be our biggest shipping day of all time,” Malnati proudly claimed.

Of course, it's also true that almost all of these deep dish pizzas are headed out of Chicago.