A report out this morning shows big disparities in arts education across Chicago Public Schools.

A sobering map on page 17 of the 44-page report highlights which Chicago communities are getting the most arts programming and which are getting the least. Most of the majority African American neighborhoods in the city are essentially arts education deserts. 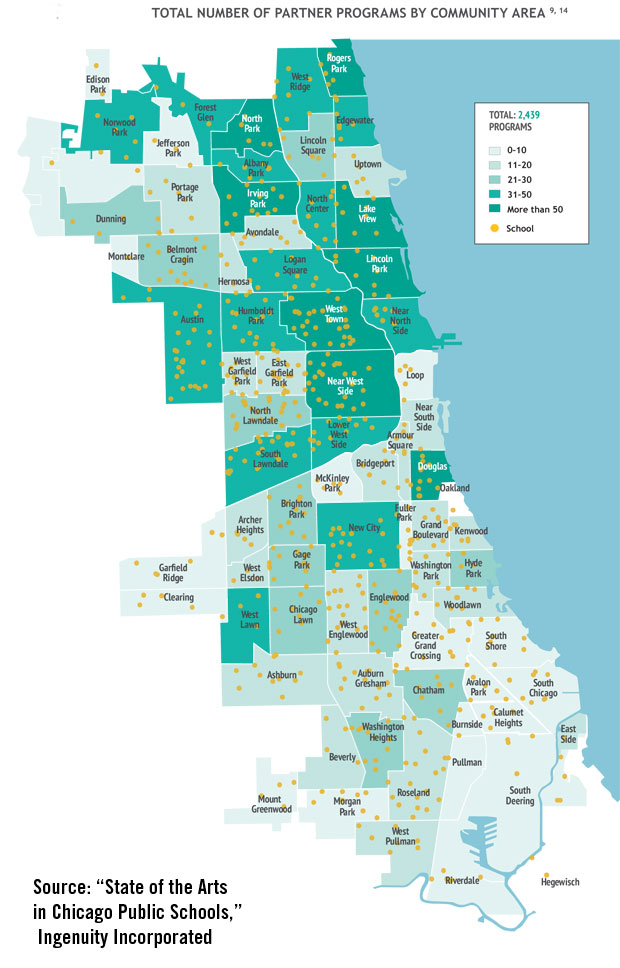 In all, fewer than a quarter of all of the district’s elementary schools reported meeting the district’s recommended two hours of arts instruction per week.

Paul Sznewajs, the executive director of Ingenuity Incorporated, the arts-advocacy nonprofit that put out the report, stressed that it’s meant to serve as a baseline for future years as his group begins to track the state of arts education. Ingenuity launched three years ago in tandem with the city’s cultural plan by Mayor Rahm Emanuel shortly after he took office.

The biggest test, Sznewajs said, is making sure the school district’s arts education plan is fully implemented, even in the face of steep budget cuts.

John Perryman, an art teacher at Ortiz Elementary in South Lawndale, sits on the Chicago Teachers Union arts education committee and said he’s troubled by the move to use more arts partners, like the Lyric Opera or the Merit School of Music, in place of teachers.

The report found that in the 2012-2013 school year, four percent of schools had an arts partnership, but no certified teacher. Perryman said that number likely rose in the most recent school year, with budget cuts and the switch to student-based budgeting forcing principals to make choices about every position and program they buy.

He also said the way CPS has added and then subsequently cut arts positions in recent years doesn’t make much sense.

“(For the longer school day), there were 100 positions created, then 100 positions cut and now for next year, they’re adding 84 positions,” Perryman said. “This has created great instability in the field of arts education because teachers are getting fired and rehired.”

The head of CPS’s Department of Arts Education, Mario Rossero, stressed that the report only looks at about half of the district’s schools. Many did not report their data in the first year, 2012-2013, the year the report is based on. Rossero said the most recent year saw an 89 percent response rate.

Wendy Katten of the parent group Raise Your Hand echoed what Rossero said and noted that in her group’s tracking of budget cuts last year, 170 arts positions were lost.

“It’ll be interesting to see what these numbers look like for this year,” Katten said.

Ingenuity is expected to put out an updated dataset with numbers from the most recent school year (2013-2014) sometime in November.