This story was updated to add additional information Oct. 15, 1:12 p.m.

Despite a 25-year old Chicago law banning the practice, landlords across the city continue to explicitly discriminate against Section 8 voucher holders, WBEZ has found.

Since 1990, the city’s Fair Housing Ordinance has deemed it illegal to discriminate against families who pay all or part of their rent with Housing Choice Vouchers. More commonly known as Section 8, the vouchers are a federal subsidy intended to help low-income families, the elderly and disabled pay for rental housing on the private market. The Chicago Housing Authority, which administers the program in the City of Chicago, provides voucher assistance to nearly 43,000 households.

But a WBEZ analysis of Craigslist housing ads found that discrimination against voucher holders continues, in ways that are sometimes blatant, and touches nearly all parts of Chicago. At the same time, a disproportionate number of ads specifically encouraged voucher holders to apply for apartments in high-poverty, high-crime neighborhoods.

WBEZ’s investigation began after listener David Mahler notified us of a Craigslist posting this past May that advertised a one-bedroom unit in Chicago’s Rogers Park neighborhood.

“At the bottom, (we) noticed that there was a little disclaimer that said ‘no Section 8 or minorities,’” said Mahler, a community engagement manager at a non-profit.

Mahler said he was shocked to see an ad that discriminated against minorities so openly, as that’s a violation of federal law. However, he said it wasn’t the first time he’d seen ads that refused Section 8 or voucher holders.

WBEZ created a database of all Chicago Craigslist housing ads during the month of June that mentioned Section 8, housing choice vouchers, or variants of those terms. Additionally, we captured all such ads that were listed that month in suburban Cook County, which enacted similar source of income protections for voucher holders in 2013.

Read more on how we compiled the data

It came out to more than 2,800 ads. On average, four to five listings a day were unwelcoming to voucher holders in the City of Chicago, using language such as “No Section 8,” “not Section 8 approved,” “not a Section 8 building,” and “no vouchers.” In suburban Cook County, ads that mentioned housing choice vouchers or Section 8 were discriminatory more than 25 percent of the time.

Klepper’s non-profit helps families with housing choice vouchers use their subsidies to move to so-called “opportunity areas,” with less poverty and low concentrations of subsidized housing. Fair housing advocates say that often, these moves can help low-income families climb out of poverty by giving children access to safer environments and better schools, and improving job opportunities for adults. But Klepper says it’s difficult.

“Families are discriminated against because they have a voucher,” said Klepper. “All those stereotypes about what voucher holders look like and how they behave. Also, landlords will talk about not wanting to deal with a government program.”

In Chicago, where 88 percent of voucher holders are black, the apartment hunt can feel like a cruel throwback to decades when blacks weren’t allowed into a lot of Chicago neighborhoods.

“I’ve had some [landlords] that come straight out and tell me, ‘We’ve had negative experiences with voucher-holders destroying units before, and we’re not currently accepting vouchers,’” related Aneesah Johnson Ford, an African-American insurance salesperson working to get her business degree.

Ford wanted to move her family to Chicago’s North Side where she says it’s safer and more diverse. But nearly two months into her search, she was still unable to find a place that would accept her voucher. In addition to using Craigslist and other online listing websites, Ford paid some apartment hunting services to assist with the search. But she said one leasing agent advised her to redirect her preferences.

“He said, ‘Well, you know what, I’m going to be really honest with you, on the North Side, they really don’t particularly like voucher holders,’” Ford recalled. “So he said I should discontinue my search on the North Side altogether, and he said that he was going to try to tap some resources here in Hyde Park.”

Worried that her 90-day window to use — or lose — her voucher could run out, Ford said she had all but given up on her hope of living where she wants.

A CHA-commissioned study found that more often than not, housing providers in the city — even some who already rented to tenants with vouchers — discriminated against prospective tenants who said they had vouchers. Most common was verbal steering of applicants to certain buildings, refusal to negotiate and inferior service. WBEZ’s analysis of Craigslist ads shines a light on more obvious violations of the city law, and points to a need for both more enforcement and more education.

WBEZ called dozens of people who posted discriminatory ads. Nearly all of them refused to speak for attribution. But several said they feel that participating in the Housing Choice Voucher program is a bureaucratic hassle. When a voucher-holder applies for a unit, CHA has to then inspect it to make sure the rent is acceptable, and the apartment is up to code. In fact, many said they thought they had to be “pre-approved” to participate in Section 8.

Others said they had heard from friends that Section 8 tenants trash their apartments. Under Chicago’s Fair Housing Ordinance, none of these are acceptable reasons to refuse voucher holders the right to apply for housing.

By far the most common excuse given by housing providers was simple ignorance of the law.

Al Williams said his concerns about the Housing Choice Voucher program trace back to the only time he rented a unit to a Section 8 tenant.

Williams said that raised a red flag for him: he worried the same would happen if a tenant were to intentionally damage one of his units, perhaps to break a lease early.

“If the landlord is not positioned to start going to court and doing all that,” he said, “chances are the landlord may just cut his losses and move on.”

Ever since his experience with that one voucher-paying tenant, Williams said all his ads for apartments he owns in the Auburn-Gresham and Chatham neighborhoods have said, “No Section 8.” 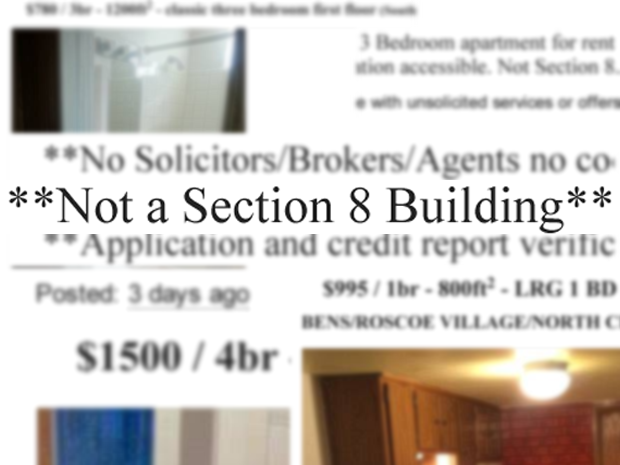 But Williams, like many of the landlords WBEZ spoke with, also appeared genuinely unaware of Chicago’s Fair Housing Ordinance.

“I don’t think there’s any law that illegalizes rejection of Section 8,” he said.

The Commission, which enforces Chicago’s Fair Housing Ordinance, handles roughly 70 housing complaints a year, most of which have to do with Section 8 discrimination. Newsome said it’s not uncommon for mom and pop operations to be genuinely unaware of Chicago’s ordinance.

While the Commission has the authority to initiate its own investigations into Craigslist ads like the ones WBEZ found, it’s too short-staffed. Newsome said in her 12 years there, the number of investigators who look into fair housing violations shrank from seven to three. As the city continues to cut expenses, the Commission has not requested that money be restored.

But WBEZ heard from many voucher holders who said that they don’t bother filing complaints with the Commission when they encounter discriminatory treatment.

“Unfortunately a lot of people don’t complain, because they feel like (there) ain’t nobody listening, this ain’t gonna get me nowhere, and they get angry and frustrated and they just be through with it. Which is not good,” said Rhonda Jones, a retired retail professional living in Washington Park. “Because that’s what I did. I was angry and was like, forget it.” 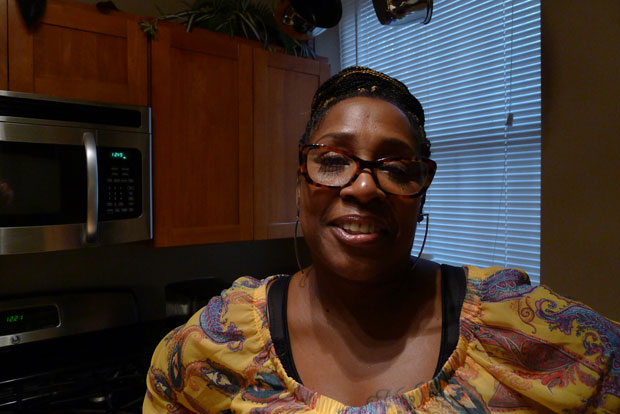 Jones said she had hoped to live in Beverly, near her family, but landlords there refused to take her voucher. In retrospect, she said she regrets not having reported them to the city. “If I had to do it all over again, I would have,” she said. But Jones has come to love her spacious, newly-refurbished apartment in Washington Park.

“This is considered ‘the ‘hood,’ if you understand what I mean,” she said. “But for me, I like this side of town because I feel like it’s going to change.” Also, she loved the new appliances, fresh paint and outdoor patio that make her 3-bedroom unit comfortable and welcoming to her fourteen grandchildren as they visit her throughout the year.

Indeed, WBEZ’s Craigslist analysis found that Washington Park sits in a South Side cluster of neighborhoods where a disproportionate number of ads specifically recruited voucher-holders. During June, nearly 2100 listings in Chicago actually contained language such as “Section 8 ok,” or “Section 8 welcome.” However, nearly all were in high-poverty areas not deemed to be CHA opportunity areas. We found the seven neighborhoods with the greatest number of pro-voucher ads were all on the city’s South Side and have poverty rates above 25 percent.

“There’s a whole crop of landlords who have properties in the low-income neighborhoods who have a really hard time finding market-rate tenants who are able to pay their rent on time, (or) who are able to pay their rent at all, in some cases,” said Eva Rosen, a post-doctoral fellow at Johns Hopkins University’s Poverty and Inequality Research Lab. “Because the poverty rate is so high there, [landlords] are turning to the voucher program as a way to actually collect rent in a more reliable way.”

Rosen has studied how landlords influence voucher-holders’ decisions about where to live through incentives and pressure tactics.

But what’s wrong with landlords in low-income neighborhoods having a chance to bring in good, reliable income?

“What’s wrong with it is that the voucher program was created to try to offer families an opportunity to move to better neighborhoods,” Rosen responded. “To escape poor, segregated neighborhoods, and to try to find homes in more integrated places with better schools and better jobs, and that’s very part of the ethos of the voucher program is to help deconcentrate poverty. So if we’re seeing that families are actually moving back into poor neighborhoods with their vouchers, then we should really be thinking about why that’s happening and how to prevent it.”

Rosen said part of this could be corrected by a new effort from the U.S. Department of Housing and Urban Development to set vouchers at amounts that reflect more localized housing values. If vouchers are worth less in poorer neighborhoods, and more in opportunity areas, voucher households might choose to locate in areas with less concentrated poverty.

“Everybody is held back when the lowest income people are held back, and they don’t have that opportunity to move up the income ladder,” said Klepper. “And the voucher program is intended to do that, to help these families move up that ladder, to get them out of poverty. And what do we do? We isolate them in neighborhoods by themselves with no jobs, underperforming schools, and then point a finger and say, ‘Oh they’re poor, they don’t want to do better,’ when in fact they do. They just need the chance and the opportunity to do it.”

Meanwhile, Ford’s search for an apartment in a North Side opportunity area ended just as she had feared: she ran out of time on her voucher and had few options. Forced to move her family to an area where she didn’t want to live, she hopes to look for housing again next year.