A controversial decades-old program to prevent white flight in Chicago is flush with cash and still collecting taxes from residents of the Southwest and Northwest sides – despite racial change and housing shifts.

The programs’ origins can be traced to the racial panic that gripped many white ethnic communities after voters elected Harold Washington as the city’s first black mayor in 1983. Often that fear played out in the housing market with white bungalow belt families worried that blacks would move in and decrease their property values.

The money collected in the so-called home equity districts was used as a kind of insurance program – homeowners could file a cash claim if the value dropped upon selling.

MAP: Where are the home equity districts?

In the decades since they were created, most neighborhoods have experienced a racial transition on their own; they are no longer white enclaves. And yet the three home equity programs are still there, still collecting money from thousands of homeowners and not doing much else.

Collectively, these taxing districts sit on millions of dollars and some activists want that to change.

The 1980s may seem a little late for panic peddling and blockbusting by unscrupulous realtors. After all, white flight had already happened decades earlier once blacks could legally buy homes wherever they wanted. 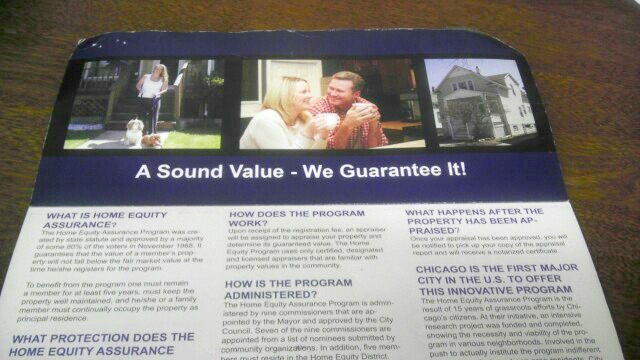 But segregation never really went away.

“You had these bungalows near the stockyards, which to be blunt about it, wasn’t exactly desirable real estate. These folks living in those bungalows – six rooms, a knotty pine basement, one bathroom and was there any racial acceptance? No!” said Paul Green, Director of the Institute for Politics at Roosevelt University.

“They were all basically white ethnic neighborhoods. The reality was is that the good people living there were afraid that they were going to lose the value of their homes, the only place they knew.”

That fear gave birth to the white Save Our Neighborhood/Save Our City coalition.

“You literally had racial change taking place mile by mile going west on 55th, 63rd, 71st. And those people didn’t have anyplace to go,” Green said. “At that time there was very little reintegration after you had segregation. In other words, you look at the South Side of Chicago, you did not have neighborhoods that went from white to black to mixed.”

The coalition pushed for an equity program to protect them from falling property values. Mayor Harold Washington, who understood white ethnic fear, got behind it. City Council considered an ordinance to implement the program. But black aldermen found the notion that whites needed home equity insurance racist. Washington publicly withdrew his support.

MAP: How the racial makeup of Chicago neighborhoods has changed

Then in 1988 Southwest Side politician Michael Madigan stepped in. The powerful speaker of the Illinois House helped pass a state law that created three home equity taxing districts – including two on the southwest side. Another district was created on the northwest side.

“The premise of the program was I think much more psychological. The psychology was people fear change and when you put into place this institutional mechanism, you create a way of responding to that fear,” said Phil Ashton, of the University of Illinois at Chicago, who’s studied home equity districts.

All homeowners in a designated district pay a small tax, sometimes as little as a dollar and fifty cents a year. That money goes into a fund and homeowners voluntarily enroll in the equity program. If the appraisal is less than the original purchase price when they decide to sell, homeowners receive a cash claim for the difference.

It’s worth noting that Oak Park started a similar program in the late 1970s to manage racial integration. No claims were ever paid out and the program ceased.

But liberal Oak Park is much different from blue collar Marquette Park, where angry whites jeered at and stoned Martin Luther King in 1966 when he marched for racially open housing laws.

A horrified 16 year old Jim Capraro witnessed that incident a block away from his home. And he carried it with him as a young man.

“I remember seeing Stokely Carmichael speak in Chicago, a civil rights leader. When he was done speaking, a white kid kind of raised his hand and said ‘what should white kids do to change this?’ And Stokely said ‘white kids should go back to where they came from and change it there,’” Capraro said.

He returned home to the Southwest Side and led the Greater Southwest Community Development Corporation for decades in Chicago Lawn.

Capraro served on the board of the Southwest Home Equity Assurance Program until 2010. He wasn’t active in getting it started but has thought a lot about its effect.

“Does a program like this support racism or thwart racism? Even the people who aren’t racist might end up getting hurt because the very act of a large number of people fleeing puts more supply on the housing market than would normally be,” Capraro said.

Whatever the intent, none of the 20-odd neighborhoods in the three home equity districts experienced white flight. Take Chicago Lawn for example. Decades after the ugly backlash against Dr. King, it experienced a smooth racial transition during the 1990s. Today 63rd Street is a bustling strip with mosques, a Harold’s fried chicken, and a Belizean restaurant. 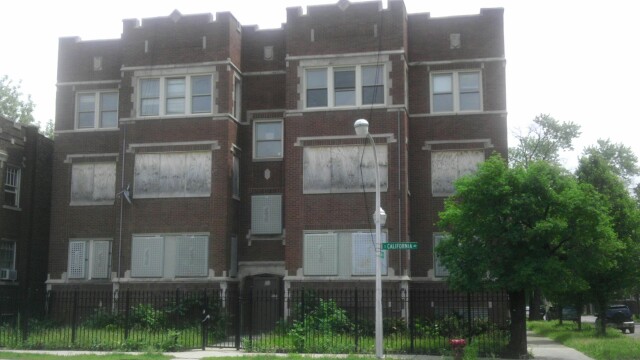 Many other neighborhoods in the home equity districts are largely Latino now.

'Why should that money be sitting there?'

At the Northwest Side Housing Center on west Addison Street, Polish signs hang inside the storefront. The office is crowded with people seeking help to keep their homes. The surrounding bungalow communities of Dunning, Portage Park and Irving Park used to house the largest concentration of Polish families in the city. Families like Ernie Luconsik’s, a housing volunteer.

“One of the reasons I moved to my area was because it was integrated. I found it fascinating that people got along and didn’t look at people as any kind of color,” Luconsik said.

These days there are nearly as many Latinos and Asians living in the neighborhoods.

CHART: How the racial makeup of the home equity districts has changed

“As a community-based organization and community residents who are supposed to be benefiting, where is the accountability about the funds and how they are being used?” said James Rudyk, executive director of the Northwest Side Housing Center.

The Northwest Home Equity Assurance Program taxes approximately 48,000 homeowners. Fewer than 10 percent of homeowners in the Northwest Side district are enrolled in the program – even though all of them pay the tax.

Rudyk said they tried to organize around this issue several years ago, but got nowhere.

“They have not returned our calls either or our request for a meeting. We were told why are we here, why are we questioning? This isn’t our business,” Rudyk said.

I know the feeling.

When I tried to talk to somebody from the three equity programs, no one agreed to a recorded interview. One of the programs wouldn’t even give me their financials until the state attorney general got involved.

Judging the success or failure of the equity programs is hard. Did the psychology of having insurance keep white families from fleeing?

We may never know. While blacks never did buy many homes in the bungalow belt, today the northwest and southwest sides are no longer exclusive white enclaves.

“Absent Latino homebuyers, white homeowners would’ve struggled to find replacements for themselves when they were trying to move out through course of the 1990s. And they didn’t move out because, I don’t think, they encountered more minorities moving in,” Ashton said. “They moved out because they were getting old and their home was their major source of wealth and they wanted to retire or they were passing away and the family wanted to resolve the estate by selling the home.”

Now those same immigrant families are facing a fresh set of challenges related to the housing downturn.

Veronica Villasenor is a counselor for the Brighton Park Neighborhood Council, which serves a low-income and working class Latino area.

“I’m a Hispanic, I’m a Latina. I know how my parents think. I know how my parents were victims of getting a mortgage that wasn’t sustainable,” Villasenor said. “Just in general the community is not educated. I think the state should assign money to develop education programs for these families – financial literacy, for mortgages.

Where would that money come from? Villasenor has her eye on the $1 million cash reserve in the Southwest Home Equity Assurance Program.

That’s the board Capraro used to sit on the board of that program. He said he can count the number of claims that went out. Usually because of an inaccurate appraisal, not because of a drop in home values.

Realizing the program was flush with cash, Capraro says the board took action.

“We appealed to the legislature and actually got permission to do this: we were lending people money at interest rates that were much less expensive than a normal home improvement loan or home equity line of credit,” Capraro said.

It was a popular program until the housing market crashed. Suddenly, a roof repair wasn’t as important as hanging on to one’s home.

Separately, the Southwest Guaranteed Home Equity Program has more than $53 thousand dollars in the bank. Last year it collected $185,000 but it hasn’t had any recent payouts.

The Northwest Home Equity Assurance Program last paid out a claim more than 15 years ago.

“Let them explain to community residents what’s being done with these funds and how we can work together it’s not work against each other it’s work together for the benefit of the community,” Valentin said.

In 2011, the Chicago Sun-Times investigated how families were cashing out of the program due to the housing economic slump, which is not what the taxing districts were designed for.

Put aside, for a moment, the reason these three taxing districts exist and focus just on the dollars.

Any community area would envy a pot of money that could potentially be reinvested back in the neighborhood – no matter what race benefits.

Map: Where are the home equity districts?

Chart: How the racial makeup of home equity districts has changed

Chicago's three home equity districts cover 18 community areas. Those neighborhoods saw major demographic shifts from 1990 to 2010. For example, in Archer Heights White residents made up 90 percent of the population in 1990 but only 21 in 2010, a drop of 69 percentage points. In the same time Latino residents increased from 9 to 76 percent.

Map: How the racial makeup of Chicago has changed 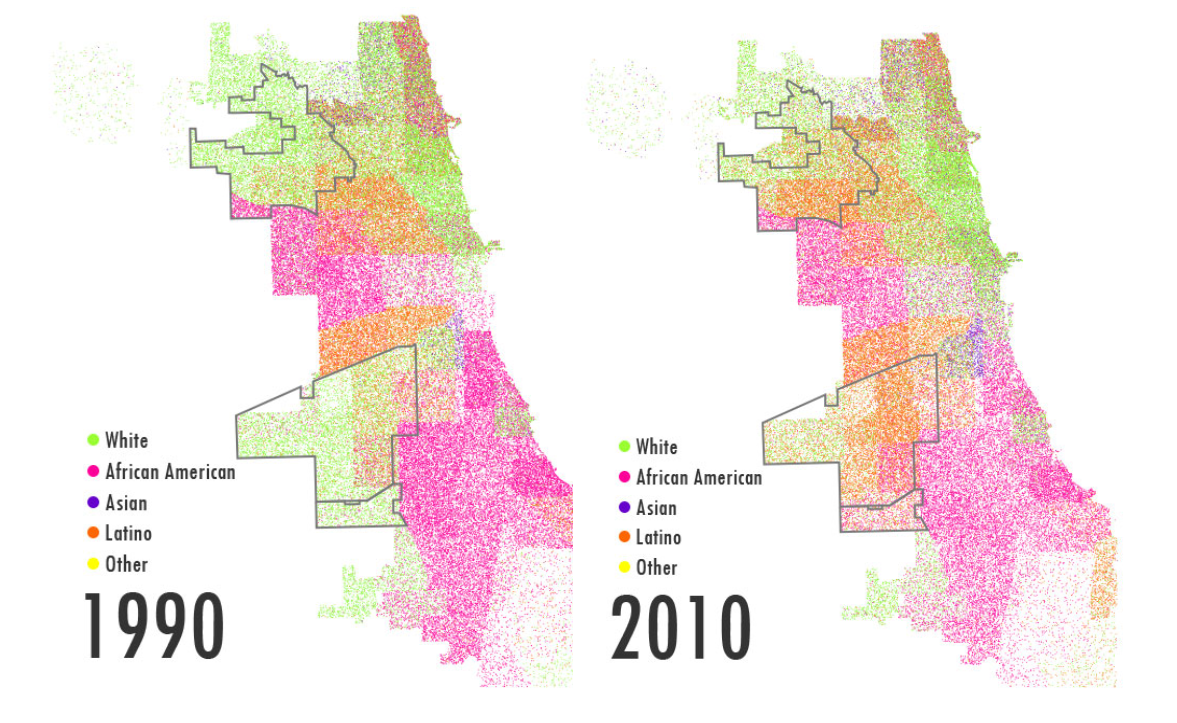