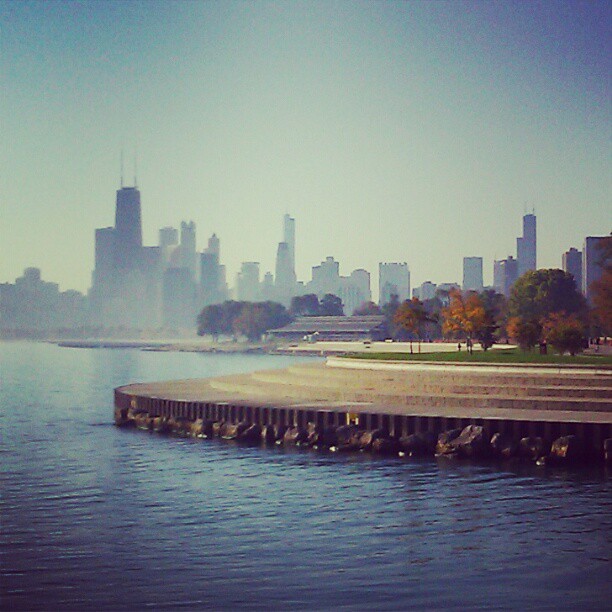 I had a lot of preconceived notions about Chicago before moving here in 2010.

I'd spent the first 21 years of my life in Dallas, and before my big move, the Windy City was just a kaledeiscope of images from movies that I'd watched: mostly a weird hybrid of The Untouchables and Ferris Bueller's Day Off.

Luckily, I got to witness a spectacular parade on my first day in town (Go Blackhawks!) without having to bypass any mob activity or train station shootouts en route.

Three and a half years later, I finally feel like a "real" Chicagoan. I graduated from my South Loop arts college in 2012, and could have easily returned to Texas, but there was no doubt in my mind that I would stay. Looking out over the Michigan Avenue bridge on a beautiful summer night, I knew in my heart that I couldn't leave. Chicago felt too much like home.

People who don't live in Chicago usually have a lot of questions when they visit for the first time, and many of them arrive with biases similar to the ones that I had years ago.

Here are few of the common misconceptions that I've heard in regards to Chicago (and at one time believed myself) that are simply not true:

10. Violence is around every corner.

Yes, an epidemic of gun violence is a serious problem in specific Chicago neighborhoods.  However, this doesn't mean that gang members are perpetually roaming our streets and shooting innocent bystanders. Violent crime rates increase in urban areas, and a densely-populated city like Chicago is no exception. So, just as you would in New York, L.A. or any other major city with lots of people packed closely together, be safe and smart about your surroundings without being overly paranoid. Living in a constant state of fear will not do you any favors.

9. Everyone has a "Chicahgo" accent.

Whenever I tell people that I grew up in Dallas, every time (and I mean every time) they say: "Huh, you don't have an accent," as if they expected me to talk like Reba McEntire. My response is the same for people who ask why I haven't picked up the flat-A Midwestern accent, and why Chicago accents vary across the board: "It's a metropolitan city. Everybody comes from different places; we're not all the same." Which leads into my next widely-held (but totally inaccurate) belief...

8. The city is made up of mostly black and white (Irish) people.

According to the latest demographics from the U.S. Census Bureau, about one third of Chicagoans are of Hispanic or Latino origin. "White persons" (including those of Polish, Irish and Italian descent) make up 45 percent of the population, while "black persons" account for 32 percent and Latinos 28 percent.

7. All of the politicians are corrupt.

Mayor Rahm Emanuel's approval ratings are in the gutter (and for good reason) but thankfully, there are plenty of other Chicago politicians who are making our city a better place to live. Corruption and scandal will always exist in every major office (the Oval Office included); so we should focus on what's going well and keep working towards improvements, instead of focusing on every corrupt politician that's ever strolled through City Hall.

6. Winters are so unbearable that living in Chicago year-round is not worth it.

My first Chicago winter was the "Snowpocalypse" of 2011, and it was pretty brutal. Still, whoever says that "the wind chill will take your face off!" has clearly never been to Minnesota in January. Yes, the winters here are long and cold; but in my opinion, the gorgeous Chicago autumns and summers are well worth the wait.

Considering the large number of pro-life and anti-deportation protestors outside of an Obama fundraiser at the Hilton last night, it would appear that not every Chicagoan is the president's biggest fan.

4. Chicago has the highest taxes in the country.

We may have the highest sales tax of all 50 states (currently 9.5 percent) but Los Angeles is hot on our heels to match it. And while buying an apartment in Chicago may be more expensive than say, Detroit, property taxes in New York and San Francisco still make ours look cheap by comparison.

3. Wrigleyville is the place to be.

Most people who visit me in Chicago want to see the enchanted land of Wrigleyville right off the bat. Real talk: a Cubs game may be worth experiencing at least once in your life, but there's a lot more to Chicago than Moe's Cantina and the Cubby Bear (thank God).

2. Eating any kind of pizza in Chicago besides deep dish is a sin.

While deep dish pizza remains the biggest draw for Chicago tourists, local enthusiasm for thin-crust at Pat's, Piece and Pequod's proves that in this town, all slices are created equal.

1. Avoid the South Side.

Within a week of living in the South Loop and attending Columbia College Chicago, a fellow student told me to "never go past Chinatown" on the Red Line. Over the years, I also heard similar rumblings about other neighborhoods ("Stay away from Hyde Park, Kenwood, Pilsen, Beverly, etc.") and I'm glad that I didn't listen to them. Broaden your horizons, North Siders: there is so much more to this city.

Do you have anyting to add to this list? What do you wish that more people knew about Chicago?