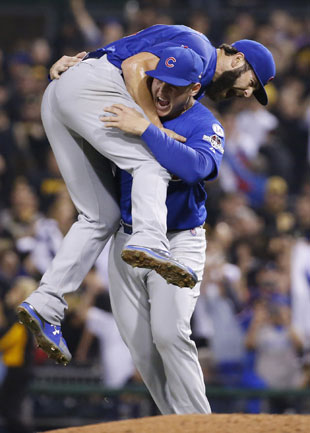 Behind a complete-game shutout thrown by right-hander Jake Arrieta, the Chicago Cubs advanced to the Divisional Series on Wednesday night in Pittsburgh, beating the Pirates 4-0.

Kyle Schwarber had a home run and three runs batted in for the Cubs and Dexter Fowler had three hits and scored three times. Chicago will open its series against St. Louis at 6:30 p.m. ET on Friday. The Cardinals won 11 of the 19 games the divisional rivals played this season.

The win in the wild card game, a recent addition to the MLB postseason, lets the Cubs advance in the playoffs for the first time since 2003.

Starting pitcher Gerrit Cole gave up all four runs in his five innings for Pittsburgh, and while the bullpen was near perfect, the team's bats were ice cold. The Pirates, making their third straight appearance in the National League wild card game, struck out 11 times and didn't draw a single walk off Arrieta.

The loss capped two rough wild card games for home teams: On Tuesday night the Yankees were shut out against the Houston Astros, 3-0, in New York.

The Astros start their series against the Kansas City Royals on Thursday night at 7:30 p.m. ET, following the 3:30 p.m. ET start of the Texas Rangers-Toronto Blue Jays series. Both will be broadcast on Fox Sports 1.