Numerous celebrities are in town for this weekend’s Chicago Comic and Entertainment Expo, but this pop culture convention also attracts hundreds of fans dressed as their favorite characters from comic books, anime, video games and more.

The convention, also known as C2E2, bills itself as the superbowl of cosplay, which is short for costume play. One of the gems in C2E2’s crown is a championship costume contest that includes contestants from around the world.

WBEZ’s Susie An stopped by the convention at McCormick Place and talked to some cosplayers about why they dress up, how they make their costumes and the enduring allure of comic conventions.

Agatha Waranka and Colin McClintick are dressed as characters from Star Wars. Waranka has been making elaborate costumes for years, but doesn’t compete in the cosplay contests anymore.

“It just wasn’t a nice culture back then. I’ve never had issues at C2E2, but at previous conventions people get a little nasty before they would compete. So I just do it for fun and enjoy the moment,” Waranka said. (Below) 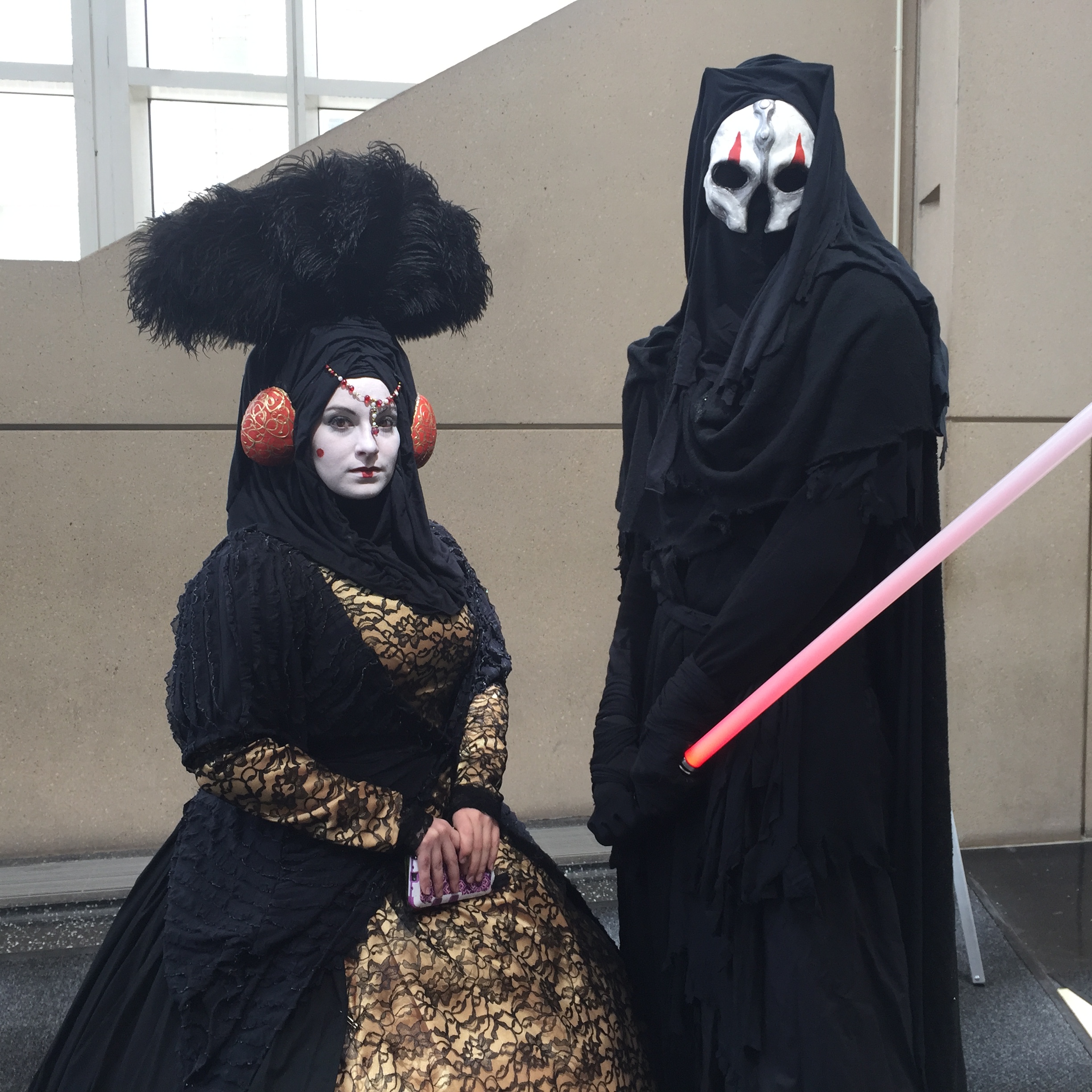 Tori Harmon is cosplaying for the first time at C2E2. She’s dressed as Professor Wicke from Pokemon, and she’s looking to make friends at the convention.

“I try to be ambitious, be outside the box, be creative more, put myself out there more. This is a good place to do it,” Harmon said. 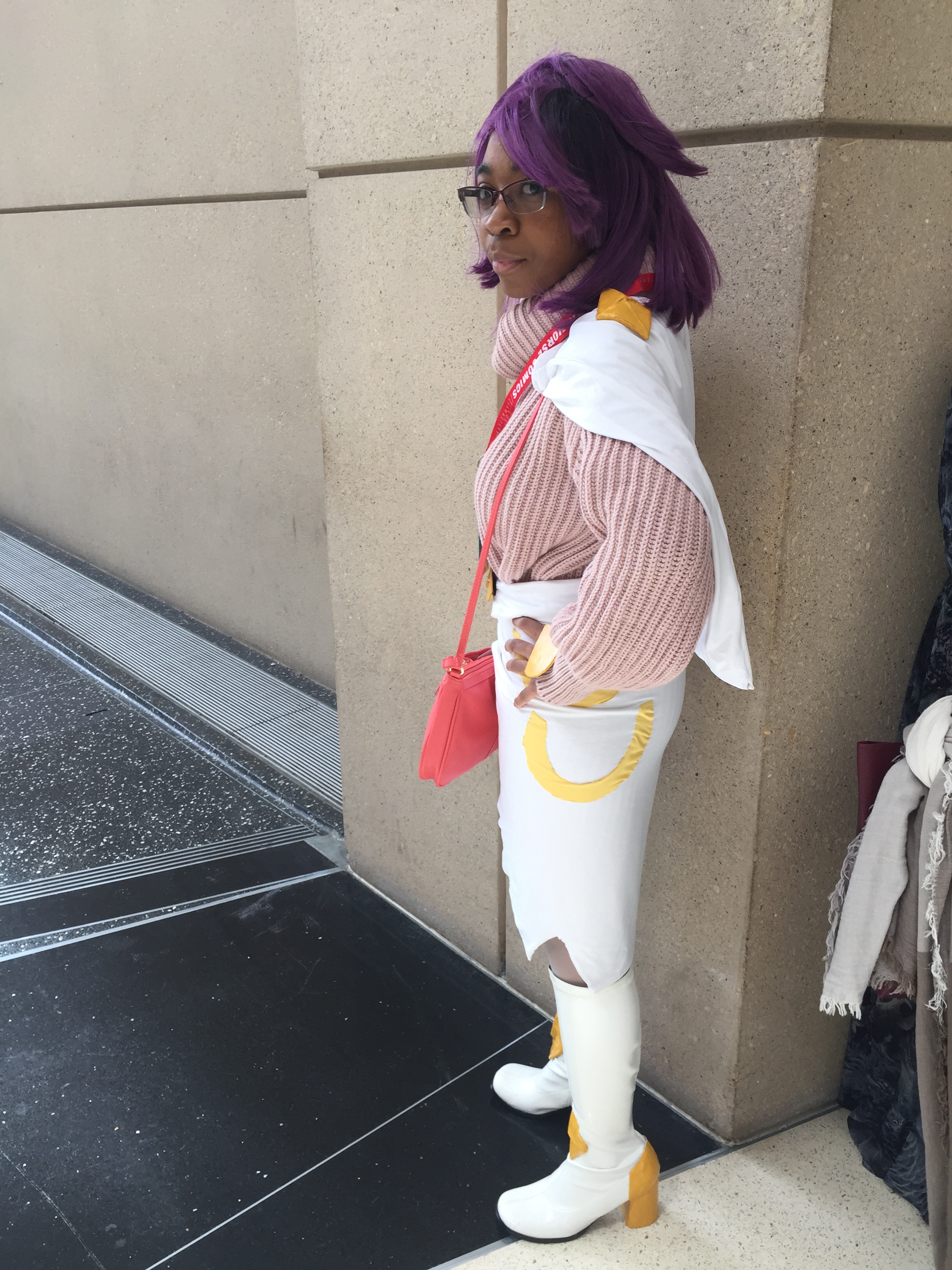 “She’s an oracle which is kind of like a priestess and she’s meant to help the king reclaim his country.” 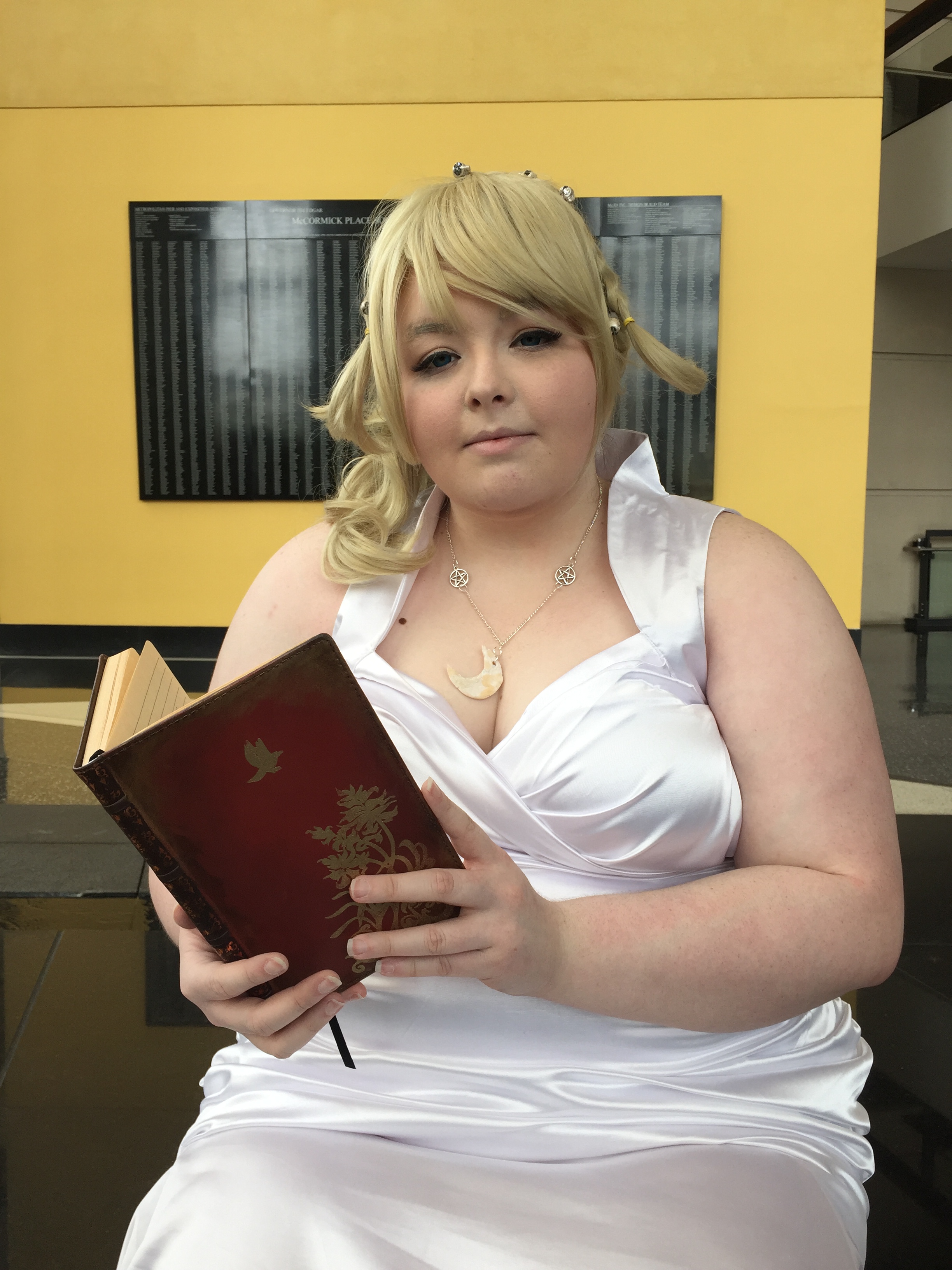 Chris English got a bunch of friends together to cosplay characters from his favorite video game, Gears of War. He made most of the costumes which are mostly made of foam. He says the material is light, but it’s hot. He still thinks it’s worth it.
“We go to work and we come home and work on this. And then we be nerds at comic cons,” he said.
(pictured top left) 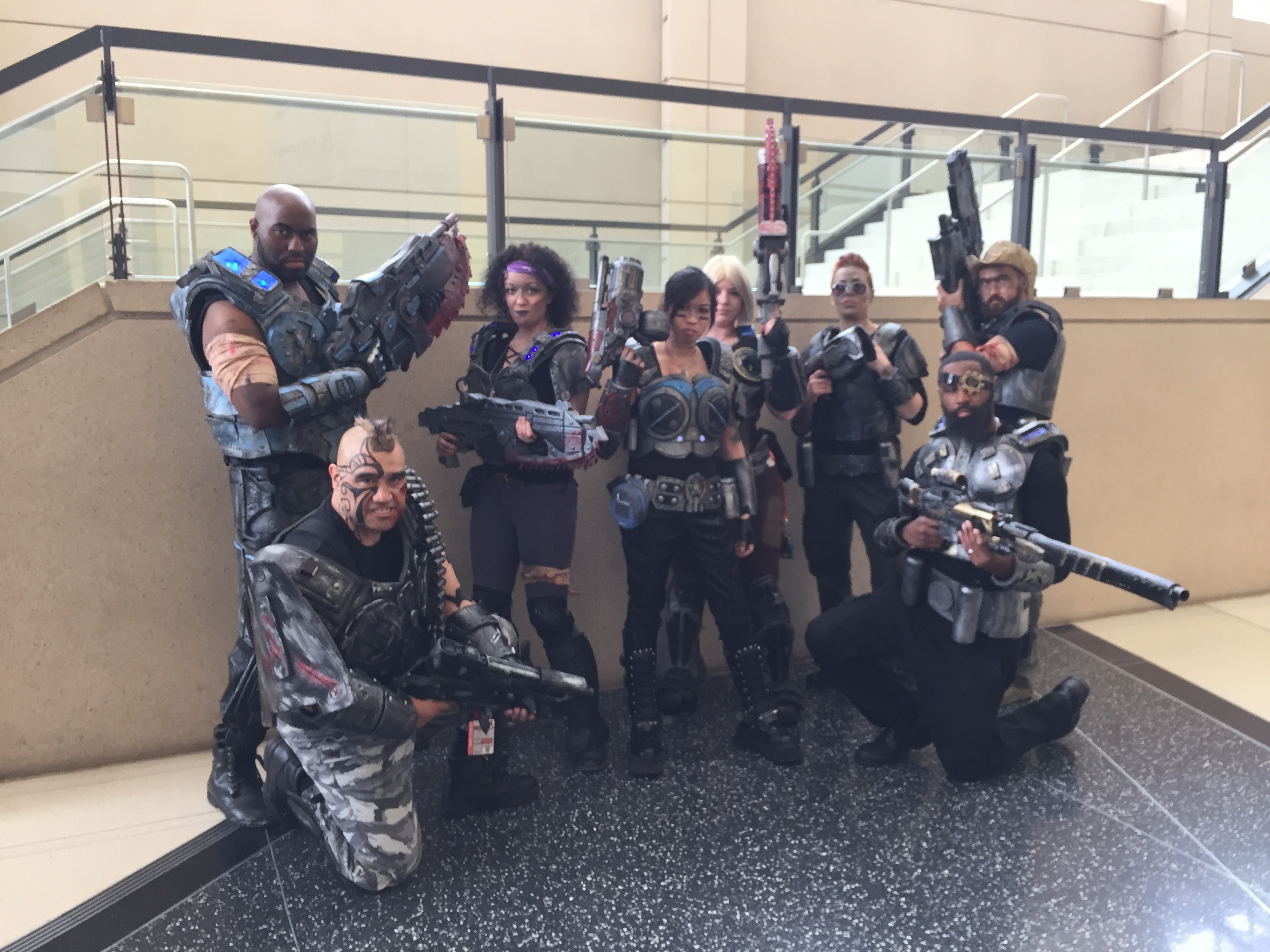 Joshua Vigor is dressed as Spiderman with a web shield. He’s a cosplay regular, always looking to the next convention.
“Next, I’m probably going to do Luke Skywalker, Return of the Jedi, since it’s easier and less restrictive.”
He really wants to see Stan Lee at C2E2, but he thinks the $100 charge per picture is too expensive.
“He’s charging way too much, ‘cause I heard it goes mostly toward his handlers. The handlers should be fired,” he said. 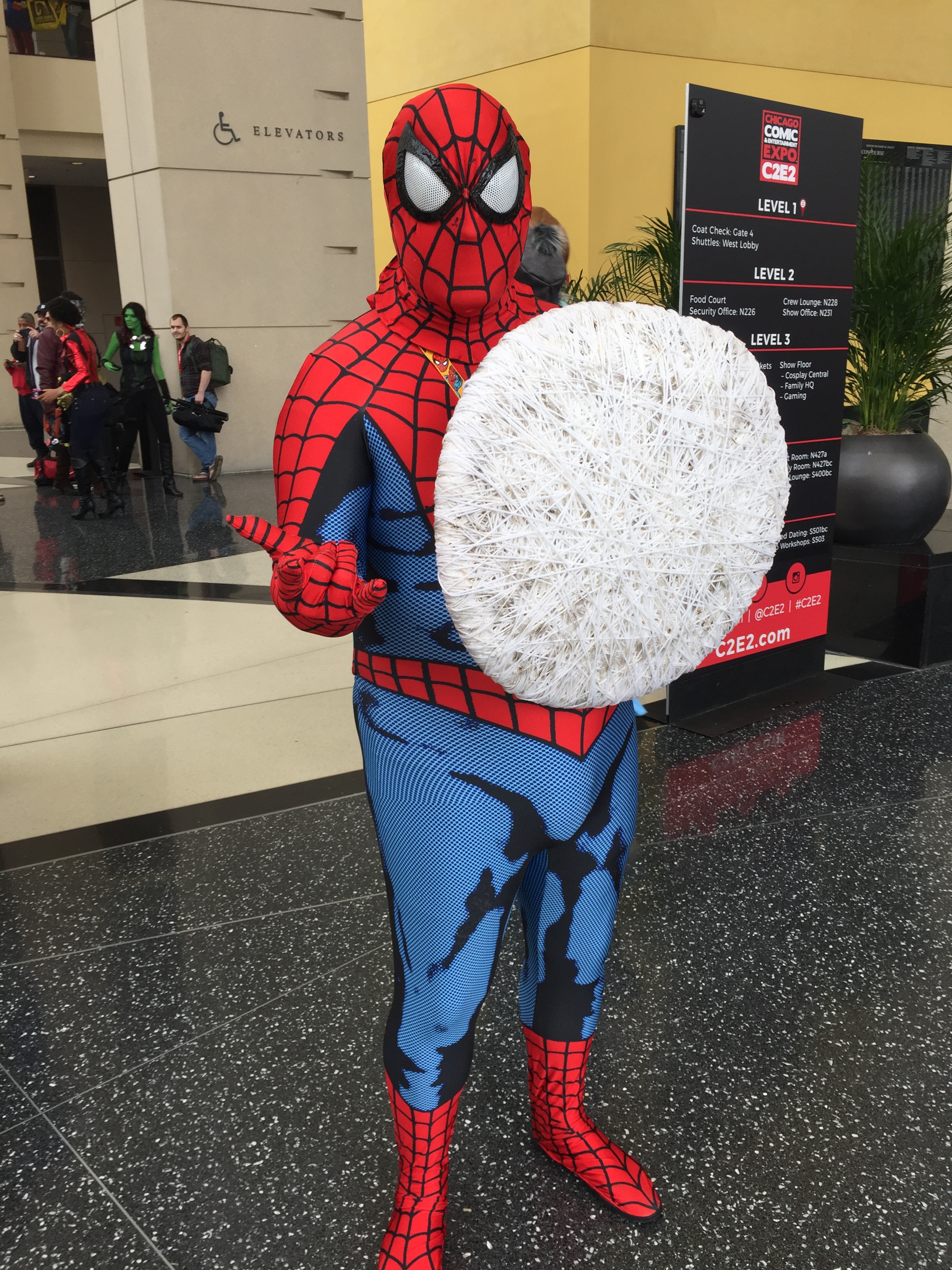 Casey Renee Welsch and her friend Janessa Lange are dressed as burlesque versions of Ursula, the sea witch and Ariel, the little mermaid.
“We’re trying to meet as many celebrities as we can. We want to meet the Harry Potter celebrities and the Stranger Things cast. And you know, not tripping on stage would be nice,” said Welsch who is competing in the costume contest.

Both have a different costume for each day of the convention. Welsch plans to cosplay Anne Boleyn for the contest.

“There’s somebody in the contest who has an ax, and it’s my dream for them to behead me. I want a photo of her taking my head off,” she said.
(Lange, left; Welsch right) 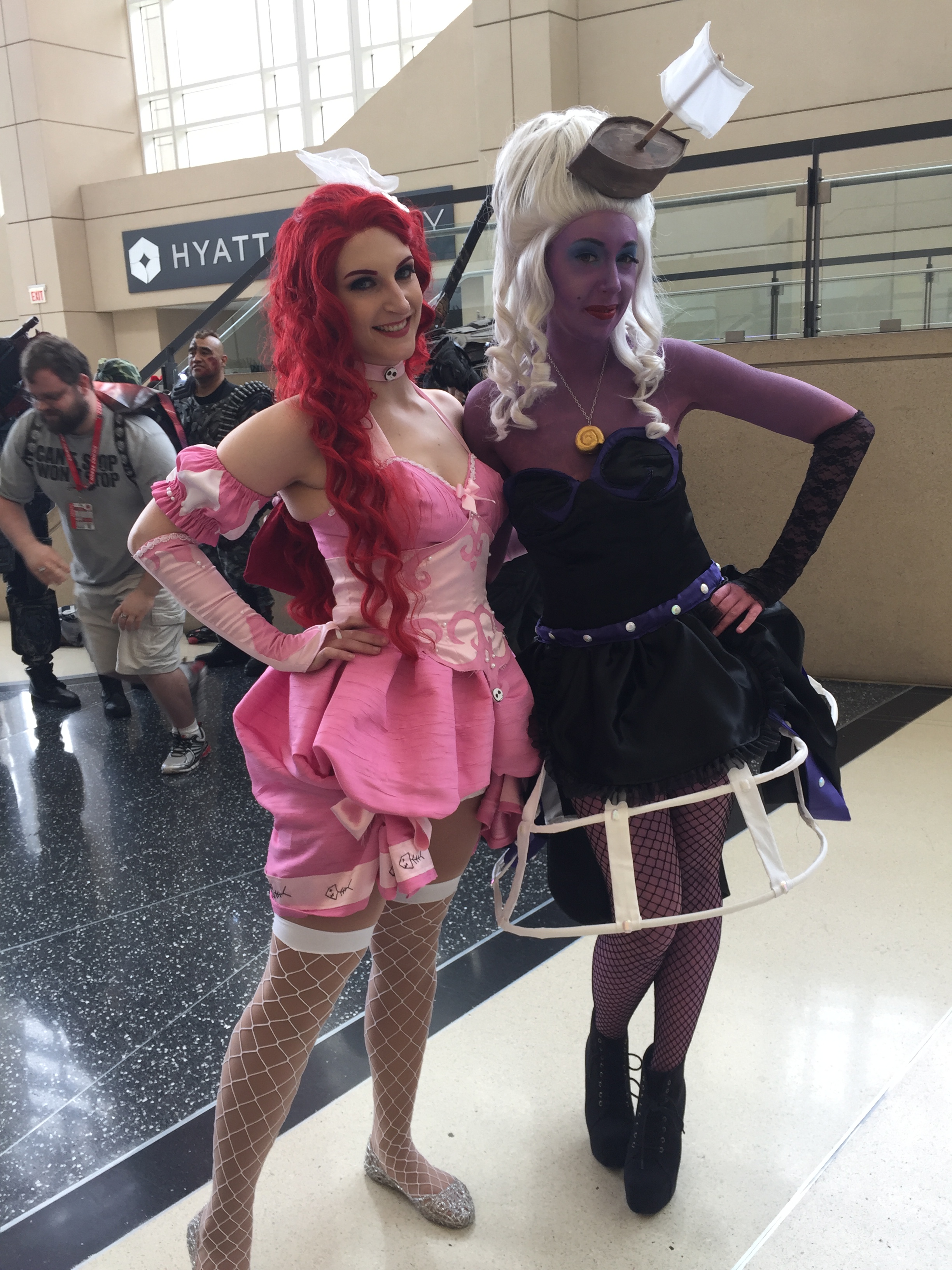 Father and daughter Manola and Eleanor Hernandez drove up from Iowa. Eleanor put a lot of work into her costume, Fukase from Vocaloid, a singing synthesizer. Dad looks less dressed up.

“I’m one punch man. His costume is not as elaborate, and I’m old. So this is as good as it gets for me,” said Manola Hernandez.

For them, C2E2 is good father daughter bonding time. Plus, he wants his daughter to use her creative energy.

“Everyone’s very supportive in the fan community. And at her age I think it’s important to express yourself and be in a community of like minded individuals that encourage that,” he said. 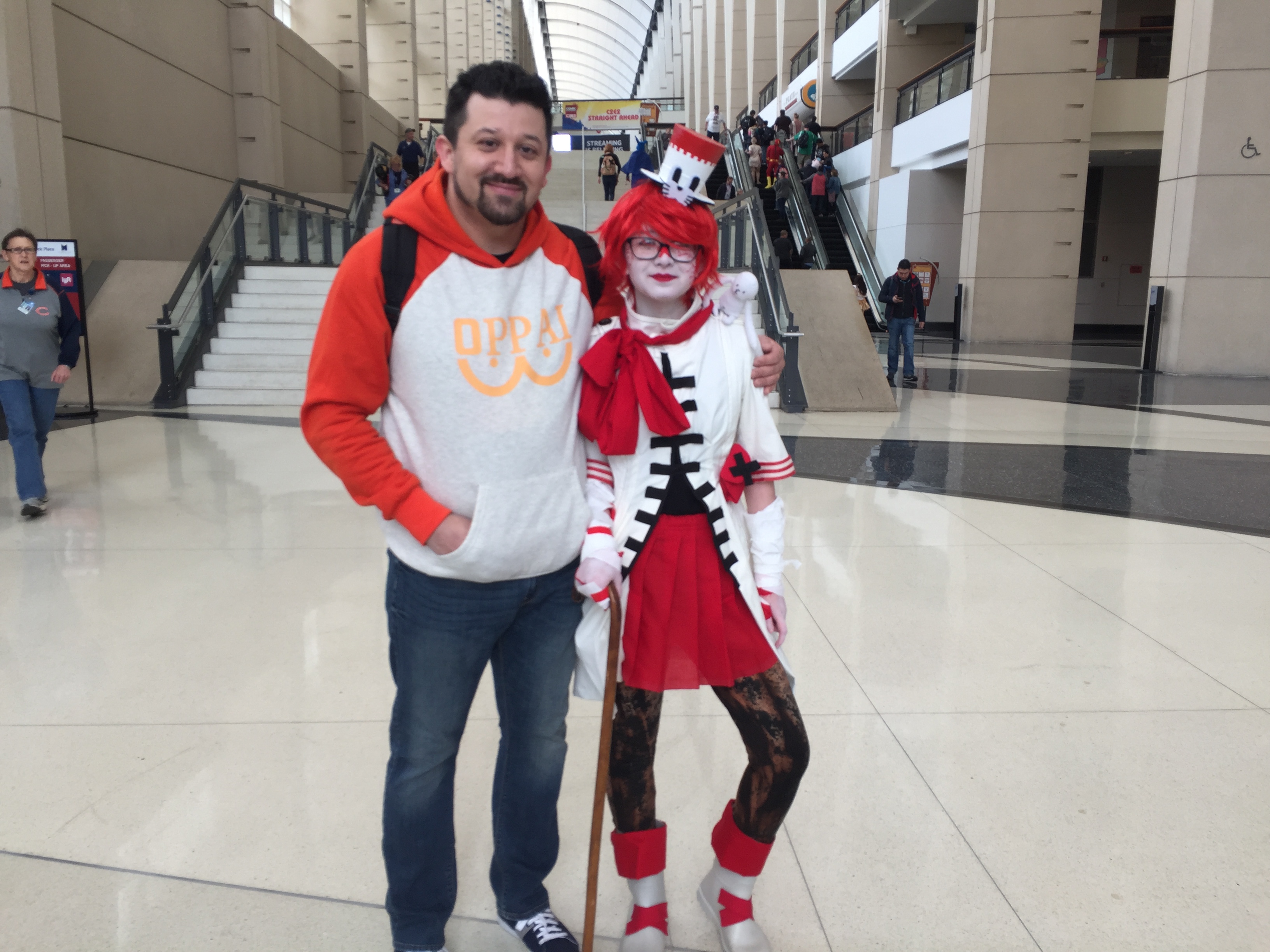