On a warm summer morning, Julia is seated in her kitchen, watching a small flatscreen on a kitchen counter. Julia, 10, smiled as she watched pictures of her family. Meanwhile, her mother Lisa, rummaged through a black and white square bag loaded with pills and bottles. It’s Julia’s morning routine. A pill crusher is used to grind up the medication. According to Lisa, 11 pills are needed in the morning, more at night.

Lisa and Julia are using pseudonyms for privacy reasons.

According to Lisa, Julia is thin for her age because she never has an appetite, something Lisa claimed is a side effect from all the medication. But Lisa said the pills do very little to get her daughter through the day.

An hour after she took her medicine, Julia wanted to go to a friend’s house to see a dog named Wrigley. But she didn’t walk to the door to leave. Julia sat frozen on the couch and just stared straight ahead. All of a sudden, Julia screamed “Wrigley! I want to see Wrigley!”

She did this for about 10 minutes straight. As she screamed, she leaned forward as her arms and legs stiffened. It was as if she was restrained by some kind of invisible rope.

Lisa said her daughter’s epilepsy isn’t the kind which manifests in convulsions. Julia’s epilepsy renders her almost motionless. She cried with no tears. This type of seizure can happen at least once a day, sometimes more often at school.

“When we have bad days, they’re very bad. I can be crying, the caregiver is crying,” said Lisa with a sigh. “Because we can’t do anything to help her.”

Julia has cerebral palsy and epilepsy. While there’s no cure for either, epilepsy is one of 40 illnesses approved in Illinois to be treated with medical marijuana.

To get it for her daughter, Lisa will have to fill out a nine-page application, including a form signed by Lisa’s doctor saying she’d benefit from using the drug. Because Julia is a minor, Lisa will get fingerprinted. Many have said that requirement likens them to criminals. I asked Lisa if she’s ever thought about doing what hundreds of families have done: moving to Colorado for a special strain of marijuana many say reduces seizures.

If Julia can use medical marijuana, Lisa hopes she can get it at one of the state’s 60 licensed dispensaries in or near her home in McHenry County. Lisa is prepared to get a second opinion if her daughter’s doctor doesn’t approve.

“Because I would like to see all these medicines diminish and cut back. I mean they have horrible side effects.” 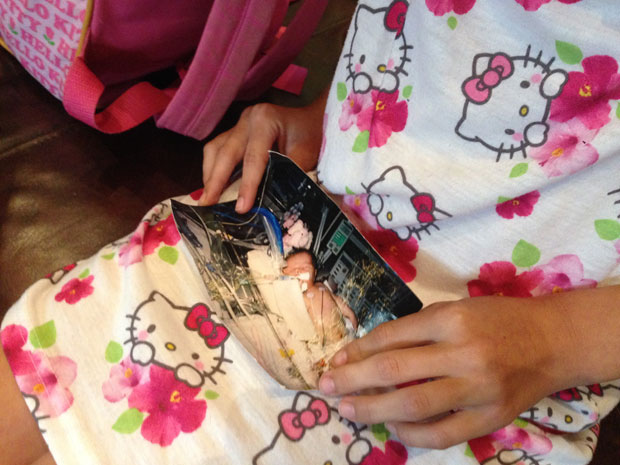 Everything from rashes to liver damage and even blindness. For Lisa, and countless others, what some in the medical profession think about using pot to treat serious illnesses has little influence on their decision. The American Medical Association discourages the use of cannabis. But the Epilepsy Foundation of Greater Chicago has come out in support of using medical marijuana. There are approximately 130,000 people in the Chicago metro area who suffer from epilepsy. Around 30,000 of them are children.

“There are members of our professional advisory board that kind of felt along the same way that some parents felt (that) trying CBD oil could, in no event, be any worse than what they’re already going through,” said Kurt Florian, CEO of the Epilepsy Foundation of Greater Chicago. “Given the successes we’ve been hearing about, it would make sense to give it a try.”

The strain of marijuana known to reduce seizures is called Charlotte’s Web. It’s named after a Colorado girl whose family fought to use it. It has little to no THC levels, the hallucinogenic property in marijuana. But it’s high in cannabidiol or CBDs, the component said to reduce the number of seizures.

“We had very motivated parents who had kids having anywhere from 100 to 1,000 seizures a day,” Florian said. “And witnessing the devastating impact those seizures were having on their children, we’d love to see marijuana, CBD oil available in Illinois.”

If the American Medical Association is opposed to it and the Epilepsy Foundation supports for it, an organization representing more than 140 thousand doctors, is somewhere in the middle. The American College of Physicians doesn’t advocate using outright. But it wants more research to see whether it helps. Dr. David Fleming is the organization’s president.

“What we’re attempting to garner is a better handle on that data,” said Fleming. “A handle on the science. So that we can advise our patients more effectively.”

To do that, the federal government has to declassify the drug, now listed as a Schedule 1. That’s in the same category as heroin. That restructuring could be more than a decade away. But some people aren’t waiting years to get medical marijuana. Some aren’t even waiting until next spring when it would be available in Illinois.

“Mike” from Rockford has traveled to Colorado a few times to get the prized CBD oil for his son, who suffers from autism and epilepsy. Mike doesn’t want his real name used. He knows he broke a few laws that carry prison time if caught. When I bring up the consequences, he shrugged his shoulders, unfazed.

“We’re not breaking any laws so that we can enrich ourselves,” said Mike. “It’s not harmful to nobody if it’s going to help him.”