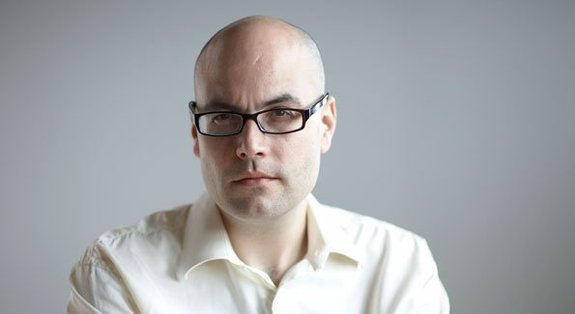 Chicago writer (and friend of mine) Nathan Rabin, formerly of the A.V. Club and now of Pitchfork's The Dissolve, is publishing a new book tomorrow titled You Don't Know Me but You Don't Like Me: Phish, Insane Clown Posse, and My Misadventures with Two of Music's Most Maligned Tribes. Since I'm fancy I already acquired a copy and am enjoying it very much, despite a limited knowledge of Phish (one concert, completely sober) and very little of Insane Clown Posse. I think you will enjoy it as well. Even if you don't care for either band, it's a story about love, mental health, pop culture affinities and a lot more.

Which additional fan bases would you fold into this book if you could?
The original vision of the book was to write about a broad range of subcultures. To that end, I attended the Disco Biscuits' Camp Bisco and booked travel for my girlfriend and myself aboard both the Jam Cruise and the Kid Rock Chillin' The Most Cruise, both of which were even more ridiculous than you would imagine.

The Lonely Island has a song called "Japan"; the concept is that every lyric is just an excuse to force their record label to pay for an insanely expensive music video. My book project felt a little like that in the beginning, that it was just a preposterous excuse to go on the Kid Rock Chillin' the Most cruise and justify it as both a professional necessity and a tax expense.

So I actually went and did all of that extra research into all these other groups of fans and didn't really get anything I could use out of it for the book, beyond contributing substantially to the cratering of my finances that helped lead to the nervous breakdown at the epicenter of my book. So I actually went and explored a number of fan bases that I did not end up writing substantially but if I had to write about an additional fan base it would have to be super-fans of "Weird Al" Yankovic, who I perhaps not so coincidentally wrote a book for/about with (it's called Weird Al: The Book and is a book about Weird Al). I was fascinated by this very brainy, nerdy subculture of Weird Al devotees and super-fans who memorize every lyric and get Al tattooed on their bodies. The fan bases of Phish and ICP tend to be very hedonistic; I was intrigued that Al's fans (and Al himself) tend to veer towards the opposite extreme while still embodying the sense of fun and escape at the heart of both music's primal, enduring appeal and the subcultures I wrote about.

I know you to be a pretty open-minded guy, but what adventures took place in the book that, a year or so earlier, you could have never fathomed you'd ever take part in?
My very first day at the Gathering of the Juggalos I watched Ron Jeremy host a "Miss Juggalette" pageant where one of the contestant masturbated vigorously as the climax of her performance (no pun intended) and witnessed the famous debacle of Tila Tequila being inundated with bottles of piss and sh*t during her ill-fated performance at the Gathering. A year before that might have struck me as a little odd but spending over two years documenting the curious ways of the domestic Juggalo has profoundly altered my conception of what qualifies as "odd."

Which experiences made you think, "Wow, now that I've done that, I'm glad I never have to do it again"?
Having taken an 18-hour trip on a Greyhound night bus from New Jersey to Ohio, I am not keen to repeat that experience ever again, especially with a crack-addled rapper (I knew he was a rapper because he would rap softly to himself as I gave up on the prospect of sleeping ever again) as my seat mate for at least part of the journey.

If my son had to grow up and become an extreme Phish follower or an extreme Juggalo, which would you choose for him (and me)?
I would choose Phish because life is harder for Juggalos. They're more public and more visible and more reviled, whereas Phish fans can more easily blend in with the rest of society and pass as "normals" (in part because they are normals). I would love the hell out of my extreme Juggalo son or daughter even as I realized that life would not be easy for them.

Can you name one lesson you’ve been able to take away from each book that you’ve written?
With my first book I felt like I had to get everything out in case I never got to write another book again. As a result, I probably overdid it a little, even though I'm enormously proud of the book. Going into The Big Rewind, I had no real conception of how tough the publishing industry is and how few books actually make a profit for their publishers (only about one in 10, I reckon) so I had unrealistically high expectations for it, especially when it attracted a tidal wave of publicity and attention. When I found out the book under-performed commercially I felt like a real failure as a writer and an author. Now I've come to understand that a book's value and its merits often have nothing to do with how it sold, that that's a bullsh*t metric for which to judge anything even vaguely resembling art. My Year Of Flops taught me restraint and understatement, that sometimes less is more and that oftentimes jokes hurt more than they help. With Weird Al: The Book I learned to write for another person. Though Yankovic was my childhood hero, I was a gun for hire whose job was to realize Al's vision for the project rather than my own. That was a useful and important structure; it's important to learn to write within limitations. In this case, that entailed writing a G-rated book for a very specific audience. And with You Don't Know Me I learned a number of important things, chief among them don't write a book that costs more than its advance. Also, do not write an ambitious travel book without doing any research or preparation or anything that can even generously be deemed homework. Know your sh*t! Don't leave everything to chance or you will end up like me, with a crazy, entertaining book you're super-proud of, even if it nearly cost you your career, sanity and life.