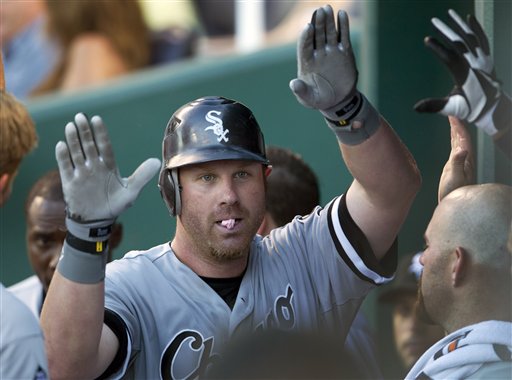 There's a sign hanging over the visiting bullpen at U.S. Cellular Field that reads, “Get 'R Dunn 396.” The sign points to an impending accomplishment of Adam Dunn's, in his quest to reach 400 career home runs.

Just a year ago many fans were counting Dunn's strike-outs and his lack of power, in the first year of a four-year, $56 million deal. This season the White Sox designated hitter is one of three players on the team enjoying a comeback year. Dunn and teammates Jake Peavy and Alex Rios will all be considered for the honor at the end of the season, but Sox teammate Gordon Beckham believes that Dunn should get the award. "You have to put Adam on top of that list," he said. "[Last season] was extra tough on him and there were a lot of expectations for him…Adam deserves it. “

What has he done so far? Dunn has hit 33 home runs, knocked in 78 RBI and made the American League All-Star team. It's quite the contrast to 2011, when he had what was considered one of the worst years a player could have: He hit .159 with just 11 home runs and struck out 177 times — ugly numbers indeed. It was difficult to watch and tougher to cover as a reporter, but Dunn never made excuses and never hid from the media (something other players that struggle will do more often than not).

Dunn could have made excuses, since he underwent an emergency appendectomy during spring training and changed leagues. It's surprising to hear Dunn say now that he looks back at his terrible season as a positive. “After the last out last year I knew things would get better — obviously it couldn’t get worse,” said Dunn. “So many things happened, by the end of the year my body felt great and I knew I would be fine.” 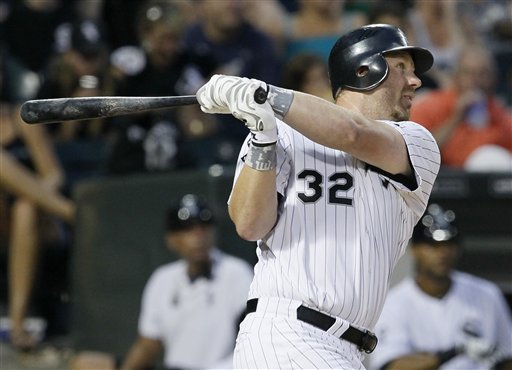 A common unsolicited response from coaches and players about Adam Dunn is that he is a favorite teammate. Other players like hanging out with him in the locker room, and after last year he has cemented those relationships. They saw a man who never changed and was never negative, despite the dreadful experience he was going through on the field.

Dunn said the importance of being a good teammate was ingrained in him when he was a 7th grader in Texas. Down there, football is a religion, and Dunn played from 7th to 12th grade. His quarterback coach taught him the most important lesson about being a teammate. “Don’t ever show emotions,” said Dunn. “And no matter what happens, you play for your teammates on the field.” He took that mindset with him when he chose baseball over football. It paid dividends for the 6’6" 285 lbs. slugger — especially last season.

Dunn began his relationship with Robin Ventura at spring training. The first year manager said that Dunn came to Arizona with a clean slate and a great attitude. “He is one of the best team guys I have ever seen," Ventura said. "You pull for guys like that. That is what makes it hard when they get bashed." This year, even with his high strike out total, there has been no Dunn bashing, and there has been no booing, either.

When you look at the numbers from his career there is one glaring omission: Dunn has never played in a post-season game in the major leagues. Now though, he believes this team has put themselves in a good position to be in the playoffs. As to his desire to finally play in October, Dunn said, “That is why you play. . . The 162 games are fun. . . but that is not what you play for. I want to play in the playoffs and win a ring. . . I am tired of going home.”

Last year you wouldn't have predicted that the White Sox would be on top of their division. Now they're about ready to go into high gear for the playoff run, and Adam Dunn is one of several reasons why they are headed in that direction.