For all the outrage GOP presidential aspirant Mitt Romney has expressed over Missouri Republican candidate Todd Akin’s comments about “legitimate rape,” he’s probably a little glad Akin stuck his foot in it. 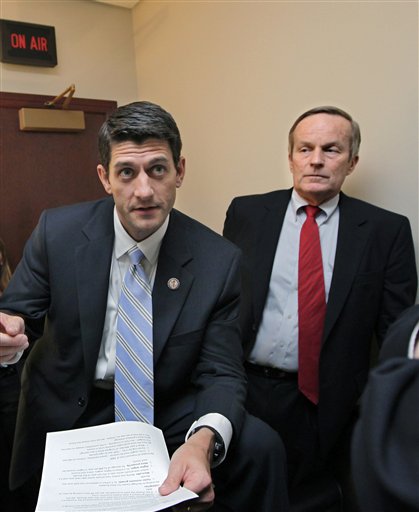 Why? Because how else were Romney and the other GOP bigwigs going to command the spotlight in such a way as to create the impression that the Republican Party isn’t really all that bad for women?

First of all, Akin: “From what I understand from doctors, pregnancy (from rape) is really rare. If it’s legitimate rape, the female body has ways to try to shut the whole thing down.”

Even Romney couldn’t let that pass. “Congressman’s Akin comments on rape are insulting, inexcusable, and, frankly, wrong,” Romney said. “Like millions of other Americans, we found them to be offensive.”

(You’ll notice the “we” there, implying his running mate, Congressman Paul Ryan, is with him on this too, and I’ll get to that in a minute.)

Romney, for all his waffling, has a history of supporting abortion exemptions in cases of rape, incest and to save the life of the mother, though he did veto emergency contraception to rape victims as Massachusetts governor. (Never mind the basic contradiction of insisting life begins at conception and then having exemptions. . . .)

Predictably, the Dems came down hard on Akin; but on the GOP side it wasn’t just Romney hammering the Missouri Republican. "What [Akin] said is just flat wrong in addition to being wildly offensive to any victim of sexual abuse,” said Sen. Mitch McConnell, the GOP minority leader. “Although Rep. Akin has apologized, I believe he should take time with his family to consider whether this statement will prevent him from effectively representing our party in this critical election.”

Asking Akin to step aside is about as harsh as it comes, right?

But there was more: According to the Houston Chronicle, Texas Sen. John Cornyn, who heads the National Republican Senatorial Committee, threatened to withdraw financial support unless Akin withdraws. Ditto Karl Rove.

But don’t be fooled. Next month the House is set to discuss a Republican spending plan that, according to the New York Times, "would bar Planned Parenthood’s network of clinics, which serve millions of women across the country, from receiving any federal money unless the health group agreed to no longer offer abortion services for which it uses no federal dollars — a patently unconstitutional provision. It would also eliminate financing for Title X, the effective federal family-planning program for low-income women that provides birth control, breast and cervical cancer screenings, and testing for sexually-transmitted diseases. Without this program, some women would die, and unintended pregnancies would rise, resulting in some 400,000 more abortions a year and increases in Medicaid-related costs, according to the Guttmacher Institute, a leading authority on reproductive health.”

Take note that Romney, in his condemnation of Akin’s words, didn’t touch the whole “legitimate rape” aspect. How could he? His running mate and Akin were co-sponsors of a bill that tried to redefine rape so that it required a violent component for an exemption to their wide-ranging No Taxpayer Funding for Abortion Act (introduced by none other than Chicago’s own Democratic Congressman Dan Lipinski).

The bill, which was passed by the House and stalled in the Senate, would ban federally funded abortions (again) and allow for "conscience exemptions" on the part of health providers. It would also prohibit tax benefits to pay for abortions, including tax exempt health savings accounts (HSAs), nor would the cost of an abortion count as a medical deduction either.

The bill would allow exemptions if the pregnancy endangers the life of the mother, or is the result of rape or incest. But its original language suggested limitations: "if the pregnancy occurred because the pregnant female was the subject of an act of forcible rape or, if a minor, an act of incest." (Meaning that statutory rape, for example, would not qualify unless it involved some sort of violence or threat.)

Akin and would-be VP Ryan also co-sponsored yet another extremist bill, The Human Life Act, which declares that "human life begins with fertilization, cloning, or its functional equivalent, at which time every human has all legal and constitutional attributes and privileges of personhood.”

What all those rights might be is a real mystery but Ryan’s own web page waxes philosophically about his support of fetal personhood, so that, all of a sudden, his willingness to allow the killing of persons in utero as an exemption for victims of rape or incest is a huge flip.

Whether Ryan had an abrupt and profound change of heart is considerably less likely than that he understands signing on to rape and incest exemptions makes him — and his fellow Republicans — seem a lot less hostile, even somewhat reasonable, on choice and women’s health issues than before Akin opened his big mouth.