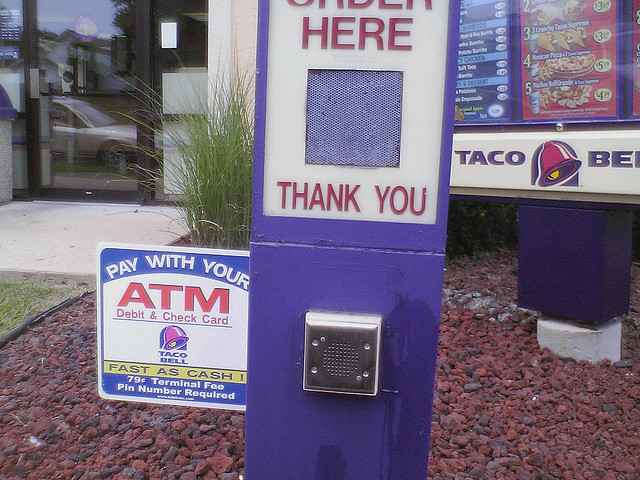 It's so easy to get irrationally angry on the internet that sometimes we forget that people do the same thing in real life. Writer Randall Colburn brings us several tales of individuals getting more than a little upset about things going wrong when ordering fast food. Things that perhaps they don't need to be quite so upset about.... Read an excerpt below or listen above.

Michael Smith just wanted a taco, and as Monday night bled into Tuesday morning he found himself, like so many before him, pulling into a Taco Bell drive-thru. He ordered into the crackling box, pulled around, paid for his meal, and drove forward, likely fingering open the crumpled bag and glancing inside as he did so. Moments later, Smith backed his truck up, directed it towards the fast food restaurant’s entrance, and hit the gas. Sheets of glass collapsed into crystals, plaster cracked and split, and, assuming the dining room was open and in use, diners reacted with a slew of shocked spit-takes and comical burrito-squeezes as Smith backed away and drove home.

Smith wasn’t hard to find. According to The Smoking Gun, his damaged truck left a shimmering trail of fluid behind it, leading police to his home, where he was promptly arrested.

You may ask why Smith would cause such damage to public property, upset happy diners, and heap untold amounts of carnage on his own automobile? According to law enforcement officials, Smith “did not get one of the tacos he ordered,” a fact the 23-year old admitted when questioned by cops.

He could’ve just turned around and complained. Or let it go, the taco was only 99 cents. But he didn’t. And, naturally, I’m reminded of Nobel Prize-winning molecular biologist Joshua Lederberg, who said, “All of civility depends on being able to contain the rage of individuals.”