The partial federal government shutdown is pushing groups of federal employees to organize assistance for themselves in ways that they’ve never had to before. On Tuesday, Transportation Security Administration employees at Midway Airport staged a food distribution for themselves and their colleagues to pick up groceries donated by the Greater Chicago Food Depository. It’s the first of two such distributions they plan this week for Midway’s TSA staff, many of whom are required to continue working through the shutdown without receiving pay.

“I knew, being a union rep here, I knew I had to do something,” said Darrell English, vice president of the American Federation of Government Employees Local 777, which he said represents about 400 TSA employees working at Midway. English said he contacted the depository to ask if they might help those employees who have been struggling to keep up with food expenses during the shutdown. Shortly after that, English said non-union management employees within Midway’s TSA office asked him if they might get assistance, too. 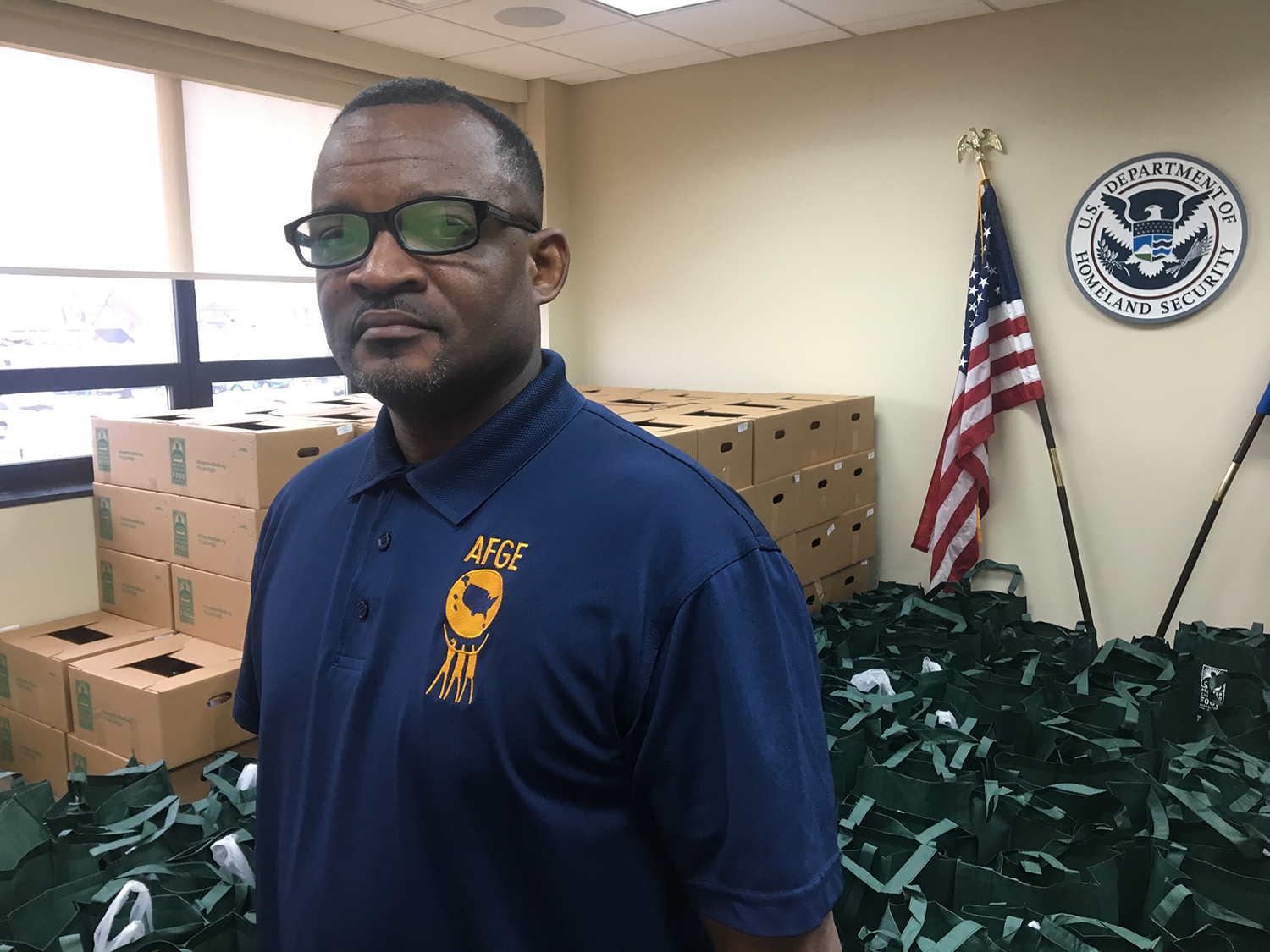 English was one of roughly a dozen TSA employees who arrived early Tuesday morning at a logistics office center near Midway to help offload the truck of donated food from the depository. Two hundred boxes filled with non-perishable goods, such as canned beans and corn, spaghetti and rice, as well as boxes of fresh apples, oranges, and sweet potatoes, were loaded onto pallets and brought into TSA’s administrative offices.

TSA officers and administrative staff started streaming in just after overnight shifts ended at 8 a.m., to pick up a box of shelf-stable foods, a bag of produce, and a $25 gift card to Jewel Osco grocery stores. Before 9:30 a.m., demand was so strong that food depository staff ordered a second van of food to be loaded from headquarters and brought to the site.

“We didn’t know what to expect this morning,” said Kate Maehr, the depository’s executive director. This was the first special distribution of food donations that the depository has organized specifically for federal workers since the partial government shutdown began one month ago. Maehr said her organization is planning more. 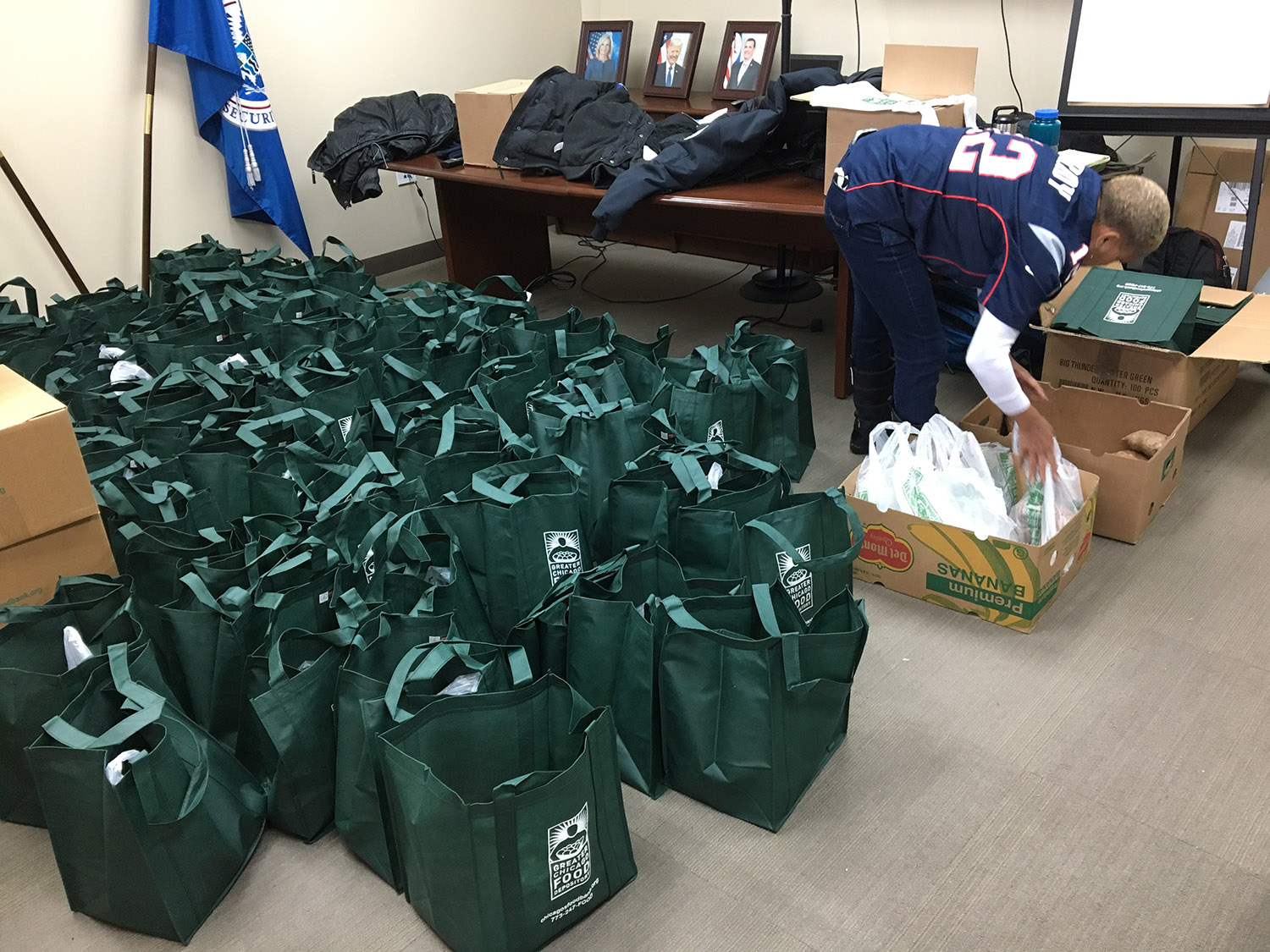 “We are getting calls from other groups (of federal workers), including the Bureau of Prisons,” Maehr said. “But each group is really distinct in terms of their site and what they can handle in terms of security.” For the Bureau of Federal Prisons, depository employees said they will likely load up a truck of food boxes that those federal workers can distribute amongst themselves on Wednesday morning.

“There is food right now, and so, I don’t want people to panic,” said Maehr. “But long-term, this isn’t sustainable.”

The impasse between Republican and Democratic lawmakers in Washington, D.C. over legislation to end the shutdown did not appear to loosen on Tuesday. President Trump’s proposal to fund the government was rejected by Democrats in the House and Senate, over provisions that would place new limits on the country’s asylum program. If the shutdown continues through the end of the week, federal employees face the prospect of missing a second paycheck since the ordeal began 31 days ago.

“The car note, the gas, and the lights, they don’t take IOUs. And the rent. So it’s been stressful,” said Gloria Perez, a transportation security officer at Midway who volunteered to help distribute food to her coworkers after she finished her shift at the airport. Perez, a single mother who can only work part-time because of a heart condition, said this is not the first time she’s relied on donations from the depository. But she said it was the first time she needed the help while she was actually working.

Perez said she was grateful to pick up a box herself but also to have an opportunity to help her colleagues, some of whom she said must be feeling even more stress than she is.

Odette Yousef is a reporter on WBEZ’s Race Class and Communities desk. Follow her @oyousef.