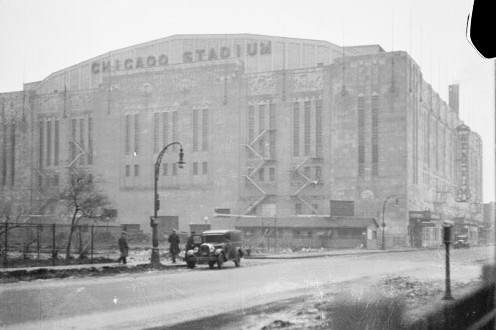 In 1932 the Great Depression was in its third year. Banks were closing and unemployment stood at about 25 percent. Many Americans felt hopeless.

This was an election year. With no improvement in sight, President Herbert Hoover and the Republicans were on the way out. The next president would probably be a Democrat.

The Democratic Convention met at the new Chicago Stadium that June. On the third ballot, the delegates nominated Gov. Franklin D. Roosevelt of New York as their presidential candidate. They then appointed a committee to go to New York, and notify Roosevelt at a later date. 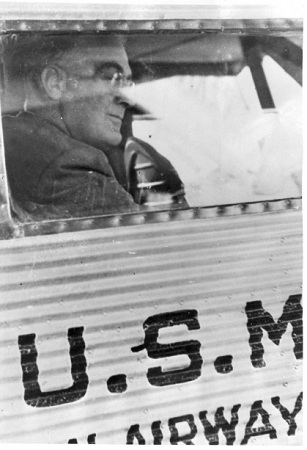 That’s the way it had always been done. But now there was radio. Everybody knew whom the Democrats had picked, as soon as it happened. Roosevelt sent word to the delegates to forget about the committee, and stay put. He would come to Chicago.

And to get there in a hurry, he would travel by airplane!

That’s wasn’t easy to do. Since Roosevelt couldn’t walk, he had to be transported everywhere in a wheelchair. The flight itself took several hours, battling storm and heavy headwinds.

Roosevelt radiated confidence. Speaking to the Convention and to the unseen radio audience, he said that the times called for bold action. That’s why he had abandoned the ridiculous idea that he should wait around, pretending to be ignorant, until he was formally notified. Of course he knew that the delegates had chosen him. 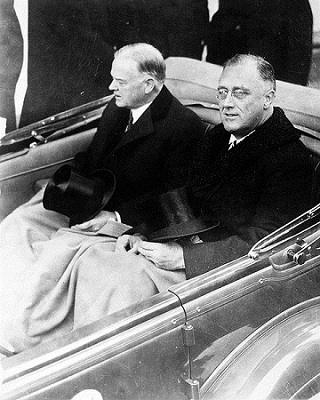 Now it was time to get busy, win the election, and get the country moving again. “Millions of our citizens cherish the hope that their old standards of living and of thought have not gone forever.” he concluded. “I pledge you, I pledge myself, to a new deal for the American people.”

Roosevelt had captured the mood of a nation ready to break with failed policies. That fall he beat Hoover in a landslide. The new president’s program came to be known by the phrase he used in his acceptance speech – the New Deal.

Today scholars debate whether Roosevelt’s policies helped the country recover from the Depression. But he sure restored America’s belief in itself.