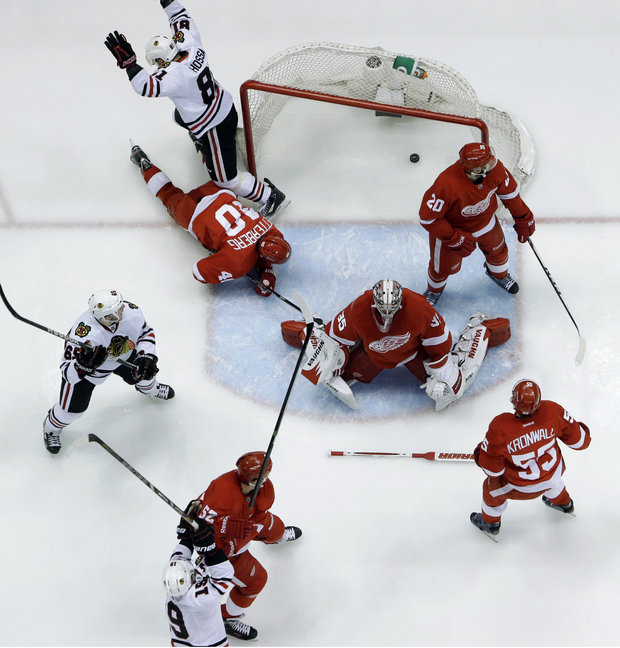 Those words excite everyone that loves sports.

Tonight it is the deciding game for the Chicago Blackhawks and Detroit Red Wings to advance in the NHL playoffs. The best part for Chicagoans is that it is here at the United Center. For added measure of excitement, this will be the last time these two teams will meet as Western Conference rivals. Next year the Red Wings will be moving to the Eastern Conference. So they will only meet in the post-season if it's in the Finals.

There has been such a buzz since the Hawks came back from their deficit at Joe Louis Arena to tie up the Red Wings on Monday. What a turn of events for the NHL Presidents’ Trophy winners. They finished the regular season with the most wins and were on the brink of being ousted by the Red Wings. But a saying that may be appropriate for this moment is: That is why you play the games.

It hasn’t been the big stars on the Blackhawks putting them back in the series as much as various other players. Marian Hossa did tally a score in the last game, but it was Bryan Bickell and Michael Handzus finding the net and Michael Frolik’s penalty goal that brought the Hawks back from the dead.

Who has the advantage? That is anyone’s guess. The Hawks are at home. They were supposed to win this series with the regular season they played and the roster they assembled.

The Red Wings are a younger team with less experience. They did win a game 7 on the road in Anaheim to capture their opening round. But the Wings seemed to crack when they had a golden opportunity to finish off the Hawks in Detroit in Game 6.

So it all comes down to tonight. The interest goes beyond hockey. During the game you will see Twitter accounts from Chicago area sports figures express the thrills or anxieties of the Blackhawks. Bears players like Lance Briggs and Robbie Gould and Bulls announcer Bill Wennington are big time users of social media.

Both the White Sox and Cubs teams are also captivated by what the Blackhawks are doing. Cubs manager Dale Sveum told us he intends on making his way to the UC tonight. He does need to have a timely game this afternoon  against the White Sox. Sveum and the Cubs enjoyed watching the end of Game 6 from the Sox visiting clubhouse. Cubs reliever James Russell became a hockey fan living in Texas and thinks this Blackhawks series has been "awesome." I was told almost the whole Cubs team has asked for tickets to the game.

The Blackhawks have a big fan in White Sox first baseman Paul Kornerko. Growing up in New Hampshire and Connecticut, hockey was the first sport he played. Now he makes his way to the United Center to see the Blackhawks when he gets a chance. Konerko really admires the tenacity of hockey players.

"They are a one-of-a-kind type of player, you respect that, as a fellow athlete,” he said.

The Sox veteran believes Chicago deserves to have championships the way New York and Boston have enjoyed.

Three years ago during the Sox-Cubs series at Wrigley Field, the Blackhawks team fresh off their Stanley Cup victory gathered at the pitcher’s mound and the Cubs and Sox joined them on the field. I was just behind home plate to see it all. It is one of my favorite moments ever covering sports.

Now we have to see if the Blackhawks can ignite that joy again. If they don’t it will be a very depressing Thursday.