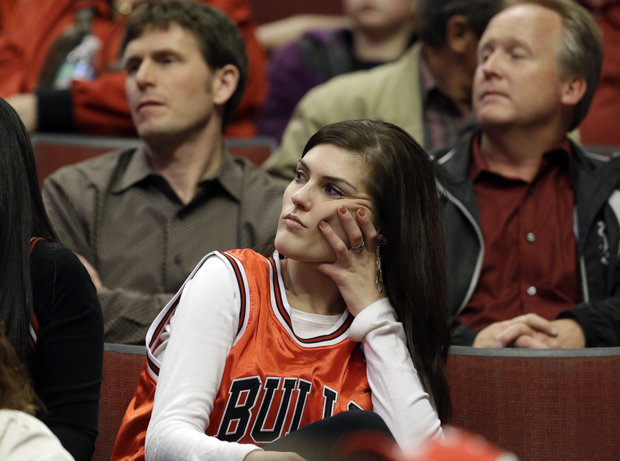 The depleted, ailing Chicago Bulls are one game from starting summer vacation. Down three games to one to the Miami Heat, it feels as though the end is near. It has felt that way since early in Game Three when the listless Bulls could not muster the strength to avoid a lopsided loss to the defending NBA Champions.

This isn’t a small hill the Bulls face to get back in this series. It is the Rocky Mountains. You could see it in the eyes of the players in the locker room following Monday’s game.

They didn't concede anything, but slumped back in their chairs. At this point, the Bulls cannot compete in the same stratosphere as LeBron James and his teammates. Missing players have forced others to carry a load that is too heavy.

It really is amazing they were able to stun Miami in Game One. Since then, the Heat adjusted defense and took advantage of their size to trap Bulls guard Nate Robinson. The physical play in the first three games was missing in the last contest. The Bulls may try to pull out all the stops tonight. This is a team that would love to go down swinging.

Dwayne Wade's sore knee may force him to miss Game Five, but it doesn't matter at this point. He wasn’t a factor in last game. The Heat is alreadly looking forward to the winner of the Knicks-Pacers series and will need Wade moving to the next round.

Better chances for the Blackhawks

Bulls fans may be gloomy, but Blackhawks fans heading to the United Center have high expectations as second round action against the Detroit Red Wings. You can’t fault the Chicago hockey crowd for being giddy. This is a series that oozes great drama and of course, there will be the ever-present 'Detroit sucks!' chant.

If there is one player with a smile on his face knowing the Wings are next it is Corey Crawford. The Hawk goalie is 11-2-2 lifetime against them with a 1.82 goals-against average and a .943 save percentage.

It has been a long time since the Blackhawks played, so recent practices have been important to keep focused for the challenge at hand.

It will be a quicker-paced series than Minnesota. Detroit has been resilient: getting into the playoffs, then forcing and winning a game 7 on the road.  The Red Wings have two big-time stars Pavel Dansyuk and Henri Zetterberg who will challenge the Hawks. Of course, the Hawks have plenty of stars and are healthy.

The Red Wings have been the cream of the crop for years. Heck, the city is known as Hockey Town. These two teams met in the post season four years ago for the Western Conference Final. There were three overtime games and Detroit took the series in five games. This will be the last time Detroit will be in the Western Conference, so in the future the Hawks can only meet them in the Stanley Cup Final.

Nothing is better than these two Original Six teams doing battle with so much at stake.