It is rare that someone young would use the word “urban” as coded language for a style. But the fact that Miley Cyrus reportedly used it when working on new music such as lead single “We Can’t Stop,” speaks volumes. As much as she is the fan, in the back of our collective minds, we wonder how much of it is an act.

Maybe that speaks to the calculated creation of her new music. To use “urban” is to reflect an outsiderness that reveals more about the speaker than those being spoken about. The only people I ever regularly hear or read using “urban” as signifier for “black” are surburbanites fearful of the city.

Pop music is difficult to create because it must have the greatest potential to appeal to the largest audience possible. A calculated effort is inherent. When does a calculated effort then jump too far into reckless posturing?

Cyrus’ look is easier to swallow, not quite fitting succinctly into any one aesthetic. First came the tattoos. Then the smart haircut. Then the perfect crop tops. Then the jewelry, the accoutrement of a new, fresh, and raw Cyrus. Why do we reward calculated efforts in style? Perhaps because style is of the surface. Not that style is shallow, but rather we can’t hide our choices. Style – to the discerning eye – is rarely subtle. But when does a series of calculated efforts turn into exploitation? When do actions become cultural tourism? 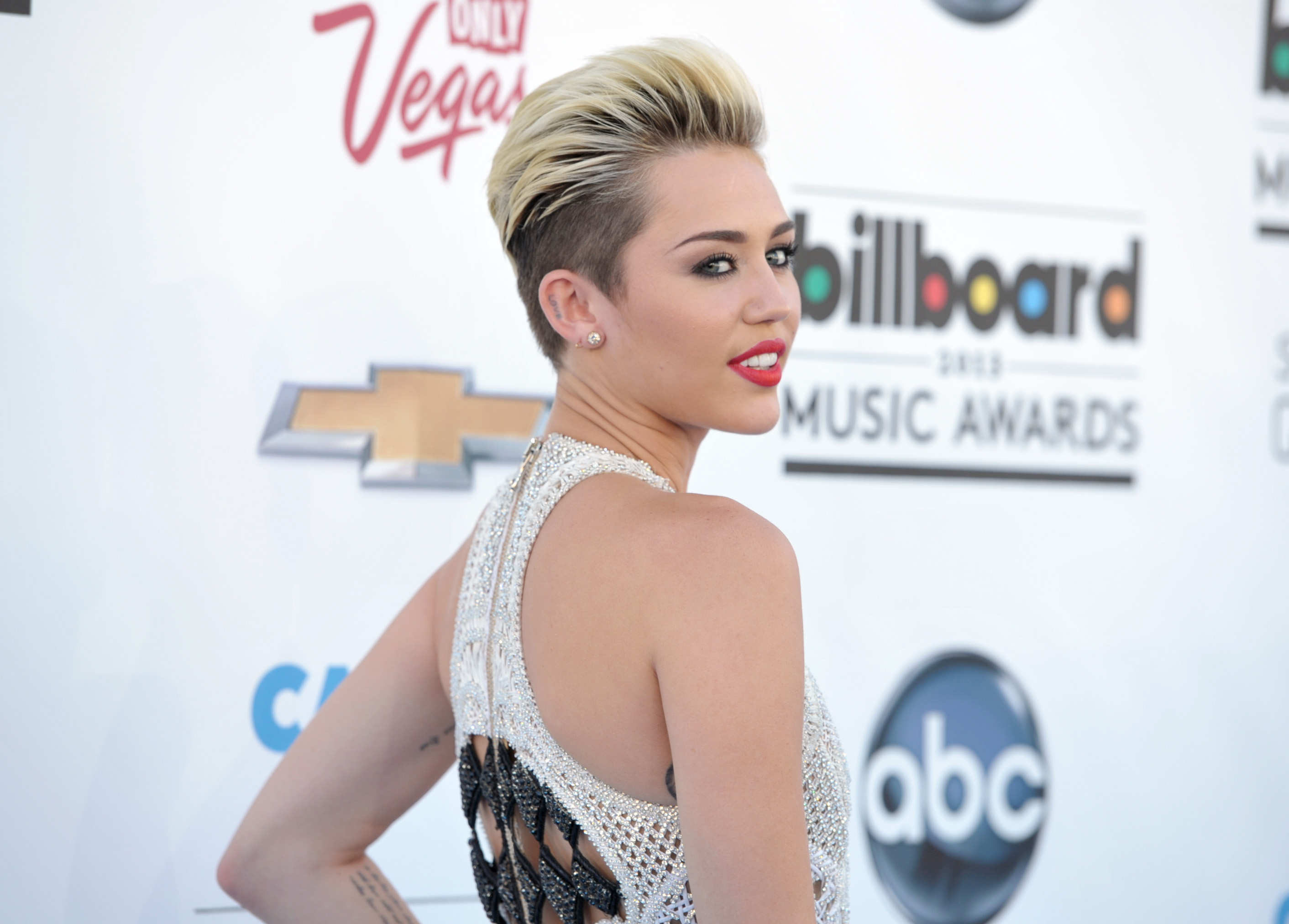 If a new rule book has been written as to how a young singer can transition into adulthood, Rihanna has crafted and edited the words and images. Rihanna was 17 when her first album, Music of the Sun, was released. Although older than the age in which Cyrus had her peak, Rihanna still made concerted efforts in her style of dress, music, and outspokenness to transition from a Barbadian Beyonce into star she is today. Her third album, Good Girl Gone Bad, released when she was 19, was the turning point. For that album, lead single “Umbrella” became a worldwide hit (after a noteable rejection from Britney Spears). More importantly, Rihanna revealed a new image to the world: a dark, short haircut and an abundant use of designer blazers constructed with over-the-top power shoulders. It was in this look that Rihanna unveiled a new level of sophistication and adulthood. We no longer saw or felt original Rihanna. This was something newer and better. Viewed through that lens, Miley’s efforts make sense.

“We Can’t Stop” is a Rihanna reject, a noteable tell in the evolution of Miley 2.0. For someone like Rihanna, often known to produce solid and explosive singles (and mediocre album cuts), to reject an enjoyable if not bland manufactured single reflects the lack of personality and imagination in the final product.

Experimentation in pop music (aesthetically at least) is a tried and trusted tradition. In the realm of the pop world, it’s an accepted representation of growth and cultural knowledge. The pop star is saying, “I am more than my peers and more than myself.” In the song, Cyrus sings about “shaking it like we at a strip club” and “trying to get a line in the bathroom.” What a rebel. But the line between exploitation and experimentation remains thin.

The video for “We Can’t Stop” is a strikingly weird effort, one that prompted confusion and a general turnaround from the muted admiration of newer, older, and temporary fans like myself. What sticks out most is the image and use of the black female body. Seen not necessarily as friends or collaborators but as props, the women, much like her Rihanna Reject of a song and the new haircut and the over-accessorized new sense of style, are little more than coded attempts to present an older, “hipper” image. One can argue too that her recent knowledge and appreciation for rappers like Juicy J and Gucci Mane are other tools in her widely publicized pop star debutante ball. There was a time when Cyrus sang about liking Jay Z in the single “Party in the U.S.A.” and then later admitted to not knowing any of his songs. Miley is “down.” But did we ever ask her to be in the first place?

In the end, the clothes and the music are fine. It is the use of actual bodies that most unnerves. They are relegated to their own scene away from the actions and partying of Cyrus' non-black friends. Cyrus wears white while they wear black. She stands in the middle, attempting to twerk and failing.

“In a white-centric world, putting white women quite literally in the center of the frame while women of color are off to the side is a powerful, disrespectful visual message,” writes Dodai Stewart in a necessary and surprisingly frank discussion of Cyrus on Jezebel. Black women are not tools for one’s public rebellion. They are not signifiers of one’s transition into adulthood. They are not manifestations of your goals, desires, and pursuit of pop riches. They are actual human beings. Really!

This is not about Cyrus not using them in the scenes in which she hangs out with her friends. This is not about wanting to belong. Inclusions matter most here. Rather, this is about following along in a long tradition of ridiculousness masked as admiration.

In an essay Geoff Dyer wrote about photography, his reflections apply just as well to images as a whole. "It occurs to me that another important component of a photograph is the things that are not in it," he wrote. "The inclusion of certain things can not just diminish a photograph but destroy it." What was chosen to create the video is more important than what was not." Isn't this so silly? the whole scene seems to ask. No, it's rather pathetic. But a surprise? Certainly not.

Yes, that might be hard to swallow in a disgustingly gluttonous, devouring, and image-based culture, one that chews bodies up and spits them out with little thought. But it is true. Although images and identity are often intertwined, that does not mean one should exploit to enhance their own efforts.

This does not mean Cyrus (or Rihanna or Beyonce or any other pop star) must live their lives and release their music as perfect beacons of responsibility. That would ultimately make the music (and their appeal) boring. Taylor Swift does what she does and does it well. She needs no further competition. But if one’s story can not be told without the shameless exploitation of the visual livelihood of others, than perhaps it is not a good story in the first place. Perhaps it is not a story that needs telling at all.