Join WBEZ as we ring in 2016 with our Second Annual New Year's Eve BLOW OUT!

Enjoy cocktails and hors d’oeuvres while enjoying non-stop, fabulous entertainment including:
stories from THE MOTH
live music from DIANA AND THE DISHES
and tunes from DJ Ayana Contreras

The Moth is an acclaimed not-for-profit organization dedicated to the art and craft of storytelling. It is a celebration of both the raconteur, who breathes fire into true tales of ordinary life, and the storytelling novice, who has lived through something extraordinary and yearns to share it. At the center of each performance is, of course, the story – and The Moth’s directors work with each storyteller to find, shape and present it.

Since its launch in 1997, The Moth has presented thousands of stories, told live and without notes, to standing-room-only crowds worldwide.

Garnering comparisons to Regina Spektor, Ben Folds, Carole King, and Cole Porter, Chicago band DIANA & THE DISHES presents a unique, high-energy recipe of pop, soul, wit, tight musicianship and contagious fun.  Since forming in 2008 around singer/songwriter/pianist, Diana Lawrence, the band has taken their city by storm, playing rock venues such as Schubas, Double Door, and Subterranean, while simultaneously becoming favorites at events and listening rooms, including Uncommon Ground and both The Paper Machete and Uptown Poetry Slam at The Green Mill. Their debut album, “Take A Picture,” was listed in Music Connection Magazine’s Hot 100 for 2011. Diana & the Dishes have an ongoing first-Wednesday-of- the-month residency at the High Hat Club. 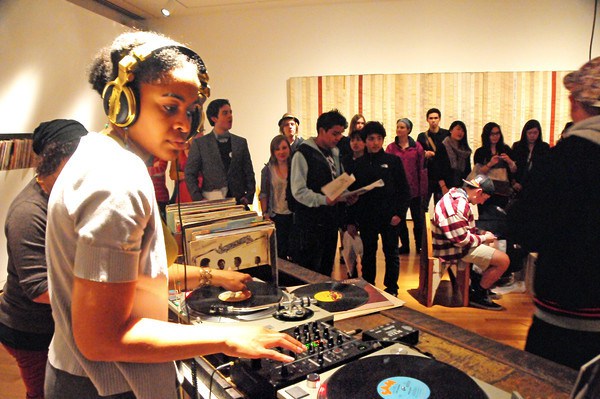 Ayana Contreras is an artist that works in sound. Her artistic process revolves around the idea of creative reuse as a means of building community. She hosts and produces a show called “Reclaimed Soul” on Vocalo 91.1fm (a sister station to WBEZ). Each program features an all-vinyl soundtrack from her extensive personal collection, as well as original audio documentaries about people who are using old items for new artistic or cultural endeavors. She also interviews original Chicago Soul artists and musicians. Ayana additionally produces a radio program called “The Barber Shop Show”, broadcast live from a Barber Shop in North Lawndale, which airs on Vocalo and WBEZ.