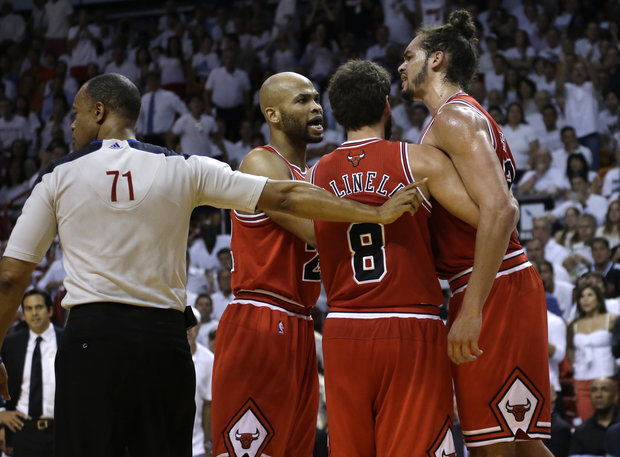 With the Bulls and Heat knotted at a game apiece, most of the attention should be on the series. But antics and injuries off the court are garnering plenty of interest.

The Bulls had two players, Joakim Noah and Taj Gibson, ejected in the enormous 115-78 loss to Miami. As Noah was walking through the exit in the American Airlines Arena, one of the fans bluntly showed her displeasure with the Bulls center. Filomena Tobias flipped off Noah and the image went viral. This is not new. Several years ago the Chicago Sun-Times had a back page photo of a Bears fan doing that to players walking through the tunnel. I remember because it was my son's grade school gym teacher doing the gesture.

The Miami fan story shielded the Bulls from their crushing defeat by LeBron James and the Heat on Wednesday night. It must have felt like a freight train for the Bulls as James did what most people expected after losing the opener: he took over. The physical play was brutal and the officiating was a big factor, with nine technical fouls and two players ejected.

Friday the Bulls can expect the same tone from the NBA defending champions. Since the Heat formula is to be rough and tough, the Bulls have to play smart in response. They cannot lose their cool and they must still move the ball on offense. You can bet the officials will be calling this game close. That may make it harder on the Bulls since they are so undermanned and can't afford any players to get into foul trouble.

Two of the ailing Bulls, Luol Deng and Kirk Hinrich, were at Thursday’s limited workout. It was mostly a film session (more like a horror film). It was the first day Deng has been able to get out of bed after an illness and severe side effects from a spinal tap procedure.

How bad has this past week been for the Bulls All-Star? Deng lost at least fifteen pounds, suffers headaches with too much movement and looks weak. Deng admitted he was frightened since he had many issues with bodily functions, speaking and walking. It's doubtful Deng will play for a while.

Hinrich's bruised calf is still causing him to walk gingerly and will likely keep him planted on the bench next to Derrick Rose. Of course, there are tons of rumors about the former MVP return and people are becoming more vicious by the day. It is extremely doubtful Rose will suit up.

The Blackhawks slammed the door on the Minnesota Wild 5-1 to take the series four games to one Thursday. What a huge series for Corey Crawford. He played tough and atoned for early first round exits the past two seasons. Last night when Crawford made some terrific saves the fans chanted his name.

The heroes of the night, besides Crawford, were Marian Hossa scoring two goals, one each for Marcus Krueger and Andrew Shaw (his first career playoff goal). Patrick Sharp had a 3rd period 5-on-3 power play goal and finished with five goals for the series.

The penalty kill was again brilliant they denied the Wild twice on the power play and all 17 times for the series.

The Blackhawks will play either San Jose or Detroit after the Western Conference playoff series.

One thing we know for sure, round two will open at the United Center for the first two games and this Hawks team will be rested and ready.