Editor's note: this story has been updated with our question-asker's progress.

A few weeks back, we looked at this question from Curious Citizen Janice Thomson:

Now that Chicago has a new electricity supplier, how much of the city’s energy would ultimately come from natural gas via fracking?

Chicago’s municipal electricity aggregation deal (approved by voters in 2012) left Janice and other proponents of renewable energy feeling duped, as the city’s pledge to eliminate coal from its fuel mix didn’t necessarily translate into a big push for renewable energy sources, such as wind and solar.

When it comes to fracking (technically “high-volume hydraulic fracturing”), though, here are the takeaways from our first answer:

But shortly after our story came out, Chicago’s City Hall announced that the electricity aggregation deal will double the city’s share of wind power to 5 percent of the total, and even tied that directly to two downstate wind farms. But it’s also clear that the deal largely traded one fossil fuel for another; yes, the city would stop using coal to supply electricity and 5 percent will come from wind, but nearly all of the rest (about 95 percent) will be derived from burning natural gas.

So, what — if anything — changes when it comes to answering Janice's question?

Integrys, the city’s new energy supplier, will need to make sure Chicago has enough non-coal electricity on hand to meet demand. To do that, the company’s tapped a previously underused natural gas power plant in Pennsylvania. The Marcus Hook power station, located about 20 miles south of Philadelphia, is set to meet the 95 percent of Chicago’s electricity supply not coming from Illinois wind.

As Marcus Hook revs up to provide the equivalent of most of Chicago’s electricity needs, should Janice be more or less concerned about fracking?

Unfortunately, plant owner NextEra Energy Resources would not disclose the source of its natural gas, but nationally about a third of domestically produced natural gas is obtained through fracking — a number expected to top 50 percent by 2035, according to the U.S. Energy Information Administration. Likewise Pennsylvania’s natural gas resources are predominantly obtained via fracking, but that doesn’t mean Marcus Hook is necessarily buying Pennsylvania gas. The state accounts for almost two-thirds of northeast natural gas production, however, and 80 percent of that is from fracking.

Without other definitive sources available, though, we’re right back where we started: It’s extremely likely that some of Chicago’s electricity is now coming from natural gas derived from fracking, but we can’t be precise with the amount.

Are there other benefits to report? 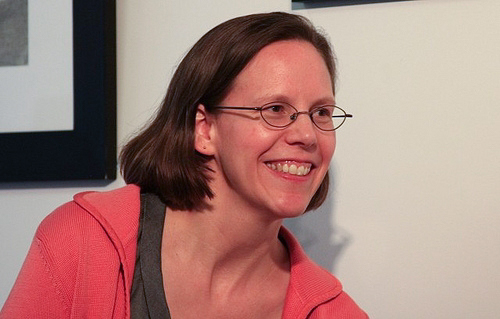 Janice’s question is about fracking, but she’s also interested in sustainability in general, and judging from responses we’ve gotten to our survey on energy choices, plenty of other people are interested, too.

One source on this is a report by the Illinois Institute of Technology’s Perfect Power Institute.

PPI laid out at least three points that get into whether there’s improvement. On the side of air quality, the report suggests Chicago’s electricity aggregation deal, including the new provision for local wind power and natural gas, reduced nitrogen oxide emissions by 98 percent. NOx, as it’s called, is a known contributor to local ozone pollution as well as acid rain.

The report also suggests the city’s electricity aggregation deal will conserve water that’s used in the process of making electricity — the equivalent of the annual consumption of about 12,500 households. These calculations were made using data Marcus Hook reported to the federal government.

But what about climate change? The bottom line for the city’s carbon footprint is complicated. Before Chicago ratepayers voted to let the city buy electricity in bulk on their behalf, about 40 percent of their power came from coal-fired power plants. Another one third came from nuclear — a much larger share than is typical, due to Illinois’ relatively high number of nuclear power plants. Except when Marcus Hook is down due outages, Integrys will be buying little nuclear power on Chicago’s behalf. Essentially zero-carbon energy, nuclear power has a very small greenhouse gas footprint. By comparison, coal makes a large contribution to greenhouse gas emissions per unit of power produced.

The PPI report said that the city’s switch from a combo of coal and nuclear to (mostly) natural gas led to a 16 percent reduction in carbon emissions.

“If it [the sources the deal replaced] had been all coal,” said the Perfect Power Institute’s John Kelly, “we would have been talking about easily more than a 50 percent reduction in carbon emissions.”

Kelly added that the city’s power supply emissions report will be updated every year to reflect the Marcus Hook plant’s performance.

The 16 percent reduction figure, though, depends on methane leakage figures that are the subject of scientific debate. Gas burns much more cleanly at the power plant than coal. But while leakage during combustion gets attention, not as much is known about greenhouse gas leakage during the delivery and processing of natural gas — activities that have ballooned in recent years as a result of the U.S. shale gas boom.

As the PPI report itself mentions, “Methane escapes in the harvesting of natural gas from wells, during the processing that cleans it up for use, and from distributing it through the pipeline transmission networks. CO2 also leaks or is generated in gas production, processing and delivery systems.” Methane is a greenhouse gas 25 times more powerful than carbon dioxide, according to the Environmental Protection Agency.

The PPI study was actually rare among such studies in its attention to the issue of methane leakage. Nationally the boom in high-volume hydraulic fracturing, or fracking, has raised the issue of methane leakage, as national energy policy proposals attempt to reconcile an increase in domestic fossil fuel production with the potentially conflicting goal of reducing greenhouse gas emissions.

“EPA has really cracked down on the gas industry about letting the methane leak,” said PPI’s John Kelly. “Over the last two years these numbers have come down.”

Earlier this year EPA revised down its estimate of methane emissions from natural gas between 1990 and 2010 to reflect changing industry practices. The Marcus Hook plant’s design, for example, is more efficient than older models, which let a substantial portion of gas get through.

It’s worth remembering that Janice’s original question was about the fuel mix for Chicagoans’ default electricity provider. As we mention in our survey post and original answer, though, there are alternative suppliers. The bad news is that the options are sometimes hard to compare with one another or, as is the case with our look into Integrys’ portfolio, data are limited and can’t illuminate every question we’d have about those choices.

An update from Janice

Our intrepid question-asker Janice decided to investigate the options further. We thought folks interested in alternative energy supply would be curious to know what she found. Here's an update from Janice on August 22, 2013.

As promised, I did investigate alternative electricity suppliers that would purchase Renewable Energy Credits (RECs) on my behalf. The only supplier I could find that purchases RECs from Illinois was Viridian Energy. Most of the others seem to purchase RECs from wind farms in other states, especially Texas. These RECs are so cheap that the electricity cost was about the same as from Integrys. So switching would be painless and might send a message to Integrys that natural gas is not ok.

I want to help green the electricity grid that serves Chicago though, and purchasing RECs from Texas wind farms wouldn’t do that. So I signed up for Viridian Energy’s 100% wind power (Green-E certified “green energy”) fixed rate plan for 12 months. At .0649/kWh, it’s slightly more expensive than the other suppliers, but not that much (Integrys currently charges 0.05589/kWh for mostly “brown energy”). The RECs are mostly from Illinois wind farms. Viridian Energy will also donate some funds (I couldn’t get an answer as to how much exactly) to a local charity of my choosing. So it seemed the best I could do right now. I’ll reevaluate my options in a year.

By the way, I was told some crazy things by electricity company reps. For example, a Verde customer service representative told me that they don’t buy RECs and the electricity entering my home would literally come directly from renewable sources. Knowing this was untrue, I emailed Verde’s corporate office to ask from where they purchased RECs. They then told me all of their electricity in Chicago was in fact “brown”!

Finding a way to lobby the city to increase the percentage of renewable energy in the electricity aggregation contract is proving challenging! Most of what I found online is out of date. I e-mailed three environmental organizations about this topic, but haven’t gotten any responses yet.

Thanks, Janice for your ace reporting and for asking a question that brought us so much new information!

Chris Bentley writes about the environment for WBEZ. Follow him at @cementley.